Who Watches the Watchers in the U.S. Navy? 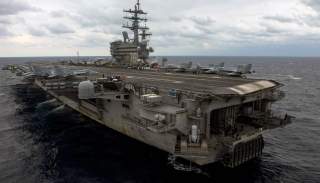 So how would the ghosts of strategists past rate the U.S. Navy’s just-released Strategic Readiness Review? The review represents the navy’s quasi-independent inquest into the hardware and human failings—a.k.a. problems with “readiness”—that wracked the sea service during the annus horribilis that was 2017. (I say quasi-independent because one of the coauthors, retired admiral Gary Roughead, oversaw the service during part of the time when the maladies the review documents seeped into naval operations.)

Here is one guy’s guess at the masters’ judgment: the review is useful on the whole, yet disappointingly noncommittal about whom to hold accountable for the navy’s malaise. Authority, it seems, comes down hard on sailors out in the fighting forces while staying its hand vis-à-vis topmost leaders—the leaders responsible for devising the rules and standards whereby sailors out in the fighting forces do business. That’s a mite perverse.

Let’s start with the bad—fittingly for this season of joy. Navy public-relations boilerplate typically justifies firing ship commanders, executive officers or their senior assistants by citing senior leadership’s “loss of confidence” in their “ability to command.” Lose the confidence of higher-ups and out you go.

If that’s the standard for junior folk, though, methinks it ought to apply to their superiors as well. Yet the Strategic Readiness Review—its executive summary in particular—finds fault not with specific senior officers or officials but with “institutional deficiencies” that were decades in the making. Such deficiencies are abstract, impossible to pin down. A multitude of factors, note the coauthors, interact with one another through a “complex system-of-systems governed by regulations, policies, and processes.” These factors shape—or mishape—readiness.

George Orwell—a master of literature, not strategy—would cluck his tongue at this exercise in abstraction. Orwell observes that vague language and the passive voice represent a refuge for scoundrels. Mistakes are made in an Orwellian world; things are done. Who makes the mistakes or does the disreputable things remains obscure, and that’s the purpose of roundabout phrasing. Deliberately or not, the Strategic Readiness Review’s framers shroud their findings in language that excuses senior leaders for their part in this year’s mishaps.

The coauthors also vouchsafe, rightly, that cultures decay. A kind of cultural drift has swept the surface navy away from high standards. They label this phenomenon “normalization of deviation,” riffing on Columbia University sociologist Diane Vaughan’s sharp commentary on “normalization of deviance.” In a nutshell, Professor Vaughan maintains that the people comprising an organization become “so much accustomed to a deviation” from established standards that they no longer consider it deviant. Departing from the rulebook becomes the new normal—and in effect the rules cease to exist.

No one does anything wrong per se in an institution inured to deviance, and yet the institution has set itself up for failure. According to the Strategic Readiness Review, a “must-do” culture has taken hold within the American surface fleet since the Cold War. When the call comes from higher authority, in other words, the fleet answers—even if answering means putting to sea half-trained in critical skills, or while suffering from significant equipment deficiencies. Deviance prevails. Few take note until disaster strikes—jarring everyone back to reality.

However valuable such critiques, they tell only part of the story. The Strategic Readiness reviewers find fault not with specific officers or officeholders but with the U.S. Navy as an institution, and with its must-do syndrome. In other words, they assign blame to vast impersonal forces beyond individuals’ ken, or control. Shadowy abstractions deform rules and practices, giving rise to conditions under which ships collide, planes crash and sailors die. No individual is culpable.

But here’s the thing: while we often liken bureaucratic institutions to machines, they’re composed of people rather than shafts and gears. And it’s people who enact policies, make decisions, and allow cultural drift to occur. That includes the policies that permitted readiness to atrophy in the surface navy over the past quarter-century.

The Strategic Readiness Review commissioners appear content to reform institutional practices without holding anyone at upper echelons accountable for the navy’s woes. But exempting top leadership from investigation or reproof seems suspect for a service that prides itself on individual accountability, and that genuinely wants to learn from its troubles. Bottom line: it appears the U.S. Navy only loses confidence in relatively junior people. Foreshortened careers are for the young. The navy ascribes larger failures not to senior people inhabiting precincts such as the Pentagon or fleet hubs like San Diego or Yokosuka, but to deficiencies afflicting the institution as a whole.

Florentine philosopher-statesman Niccolò Machiavelli would scoff at measures that purport to reform a system, and refresh a culture, without holding responsible those who superintend that system. Machiavelli saluted Roman republicans of antiquity for finding the gumption to kill the sons of Brutus—stakeholders in the royal order to which Romans had just put paid. For Machiavelli replacing a corrupt order with something better means replacing the people beholden to the old order. Change need not involve the sword, but chances are it will demand ruthless means of some sort.

Why? The Florentine scribe insisted that individuals are captive to their natures, and thus find it hard or impossible to change with the times. Great as he was for times that demanded Rome assume the defensive against Carthage, Fabius Maximus was unable to modify his ways when the time came for Rome to wrest the offensive from Hannibal. Hence the Senate dismissed the aged imperator and turned to Scipio, who earned the moniker Africanus for carrying the war across the Mediterranean Sea to assail Carthage on Carthaginian ground. Scipio was a man for the new season.

So to change an institution or state with the times, smiles Niccolò, you must change personnel. You can replace a Fabius with a Scipio. Changing out senior leadership is helpful. But it takes wholesale cultural reform to update an institution—a body of people animated by ingrained habits of thought and deed—from top to bottom.

It can be done in a hurry given sufficient resolve. Once upon a time the U.S. Pacific Fleet Submarine Force, or SUBPAC, undertook Machiavellian measures to root out skippers unable to make the transition from peacetime to wartime operations, including honing the killer instinct necessary to raid mercantile shipping. A captain found himself without a command if he failed to torpedo enough Imperial Japanese Navy craft after a set number of patrols. The high command lost confidence in his ability to command, or more accurately in his offensive spirit. He was no Scipio. He was out of step with the times.

SUBPAC’s cultural revolution is worth rediscovering, and applying throughout the navy hierarchy. Those were policies with attitude!

All of this being said, there is an upside to the Strategic Readiness Review’s emphasizing vast impersonal forces while scanting personal responsibility. There are larger forces at work over which the U.S. Navy has minimal control. The review points out, for instance, that the demand for naval forces outstrips the supply, or threatens to. Indeed, the navy typically keeps the same number of vessels deployed as did a Cold War navy twice its size. Regional commanders—U.S. Central Command, Pacific Command, and so forth—request ships at rates the naval service finds it hard to meet, while the navy leadership has little standing to say no. Demand is unrelenting.

That’s a problem, and it grinds down sailors and matériel over time. Admiral J. C. Wylie, one of Newport’s own masters of strategy, would instantly grasp the potential for never-ending burdens to wear down a force. Wylie partitions military operations into two types: “sequential” and “cumulative.” Sequential operations are wartime operations meant to pummel an enemy into submission. One force strikes another in sequence, landing one blow after another until victory is in hand. One action precedes and leads to the next. Plot sequential operations on the map and they resemble a continuous line or curve undulating from the origin toward the final objective.

Cumulative operations, by contrast, involve tactical actions unconnected to one another in time or on the map. Submarine raiding, for example, doesn’t sink a hostile navy or merchant fleet at a single stroke; it chips away at that fleet by dispersing boats on the map to strike at hostile shipping they happen to encounter. The scattershot approach enfeebles the foe over time—debilitating him bit by bit while imposing quandaries on him, such as the impossible choice whether to replace sunken warships or merchantmen. SUBPAC’s campaign against Japan in World War II constituted a quintessential cumulative campaign.

Trouble is, cumulative operations cut both ways. Responding to customer demand everywhere on the map wearies a force over time, even if every single action fulfills its goals. A navy substitutes being on station for training and upkeep. Savvy foes, moreover, can consciously exacerbate the effect by generating new demands—keeping the American fleet busy everywhere at all times. Grinding down the U.S. Navy isn’t the chief purpose of China’s island-building efforts in the South China Sea—far from it—but inducing the U.S. Pacific Fleet to undertake regular freedom-of-navigation cruises there represents an important side benefit. Likewise, dispatching China Coast Guard cutters to the waters adjoining the Senkaku Islands runs the smaller Japan Coast Guard ragged.