Who Will Take the Hit for a Government Shutdown? 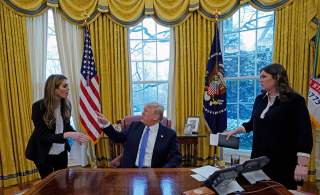 National security hawks want more money for the Pentagon. Fiscal hawks want to see more spending cuts. House Minority Leader Nancy Pelosi, (D-CA), has instructed her members to not provide the GOP a lifeline by supplying votes to allow a continuing resolution to pass with just a rump of Republicans supporting it.

But the biggest problem is immigration. Liberal Democrats would like to see a legislative solution to Deferred Action for Childhood Arrivals (DACA) included in a must-pass spending bill to preserve former President Obama’s deportation protections for young illegal immigrants who came to the U.S. as minors with a minimum of concessions to Republican immigration hawks.

President Trump announced he was ending DACA, a popular but legally and constitutionally dubious immigration policy, back in September. But he gave Congress until March 5 to craft a legislative solution essentially codifying the program.

Even a straight legalization of DACA would be a victory for separation of powers. It was one thing for the Obama administration to decide that a sympathetic subset of illegal immigrants would not be an enforcement priority. It was far more problematic to create a program for them, including the issuance of work permits. This kind of policymaking is within Congress’ constitutional purview. Obama was attempting an end-run around lawmakers’ failure to pass the DREAM Act.

Trump’s election was not about constitutional fastidiousness, however welcome examples of such might be. Immigration was one of his core issues. While he has regularly waffled on DACA itself, despite calling it one of Obama’s “two illegal executive amnesties” in a major immigration speech, reportedly co-written by Steve Bannon and Stephen Miller, during the campaign.

A major part of the rationale for phasing out DACA and punting it to Congress was to extract Democratic support for more Trumpian immigration policies: enhanced border security, interior enforcement, changes to family-based immigration and the diversity visa lottery, and the “big, beautiful wall.”

If Mexico can’t be induced to pay for the wall, perhaps the Democrats can be—in exchange for DACA.

Trump brought immigration restrictionists like Sens. Tom Cotton, (R-AR), and David Perdue, (R-GA), to the negotiating table, alongside Miller, now a senior domestic policy adviser in the White House. They would have been shut out of such discussions under Obama and George W. Bush. The usual suspects who have been promoting “comprehensive immigration reform” for the better part of the last decade were also included.

Both sides came away from a confusing White House meeting on immigration that Trump agreed with them on the best way forward on DACA. Democrats and pro-legalization Republicans heard Trump express sympathy for the Dreamers and imply he would sign whatever legislation Congress sent him. Immigration hawks heard Trump emphasize that he wanted an end to chain migration and the visa lottery, in addition to the wall, as a condition for signing a DACA bill.

All of these things were said, causing Sens. Lindsey Graham, (R-SC), and Dick Durbin, (D-IL), to offer a plan marginally to the right of the Gang of Eight in important respects but not really satisfactory to sophisticated immigration hawks (certainly not something worth picking the DACA fight over in the first place).

Soon the only words from the meeting that were remembered were “s---hole countries” (some insist “s---house,” others are adamant they didn’t hear anything at all). This increased chances of a shutdown because it a.) made the restrictionists newly promoted to the bargaining table look bad, because they were forced to defend both the president and the whole concept of “merit-based” immigration from charges of racism, b.) it reduced the ability of Democratic leaders to dissuade liberals, especially black and Hispanic legislators, from the shutdown path and c.) it made it near-impossible to sell those lawmakers on any compromises with Trump.

Thus the parties are on the precipice of testing two competing theories about government shutdowns. Do voters punish the party that precipitates the standoff, especially by making extraneous policy demands? Or do they simply blame Republicans, who in this case will have both houses of Congress and the White House?

In past shutdowns, Republicans have gotten the blame. But they have generally been the aggressors, shutting down the government because of demands they were making of a Democratic president. The 1995–96 shutdowns arguably quelled the “Republican revolution.” The 2013 Obamacare defunding impasse was a (short-lived) catastrophe, though the GOP still had a big midterm election a year later.

This shutdown would happen in an election year. Republicans are prepared to argue that Democrats are shutting down the government by mounting a filibuster over amnesty for illegal immigrants. Democrats are going to frame their filibuster as a righteous crusade against a racist president and argue that Republicans should be able to govern without them since they control everything (hoping voters won’t understand filibusters and cloture).

The tie-breaker is almost certainly going to be a hostile media that will amplify the Democrats’ messaging rather than Trump and the Republicans’. Given Trump’s itchy Twitter finger, it is doubtful Republicans will be able to manage much message discipline at all. A shutdown will add to the perception of Trump-induced chaos and the questions about whether Republicans can govern competently. And amnesty for the Dreamers is not as polarizing as legalizing the vast majority of undocumented immigrants in the United States.

So expect Republicans to take the blame and Trump to waver as his favorite talking point, the recent stock market gains, take a hit. Yet there is one caveat: shutting down the government over immigration might not play as well for the ten Democratic senators running for reelection this year in states Trump won as it will for the party nationally. These senators could provide the votes to pass a bill to keep the government open or end debate on an immigration deal.

A nation turns its eyes to Claire McCaskill.