Who Would Be Favored in a China-India Conflict in the Himalayas? 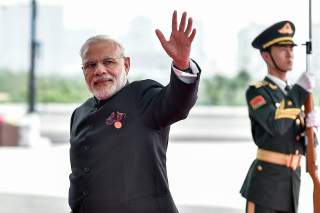 The People’s Republic of China and the Republic of India engaged in an armed standoff on the Doklam Plateau from June to August 2017. The tension between the two countries began ratcheting up when the People’s Liberation Army (PLA) began building a road southward into Tibet on June 16, 2017. This drew a response from the Indian army, which sent small units to the area to stop the construction two days later. Although that incident did not end in war, what would have happened if the PLA continued extending the road southward and the Indian’s responded with a show of force?

It would be interesting to imagine how this scenario would transpire—that both of Asia’s two major powers would be coming to blows. We could be surprised with the outcome since many perceive the PLA as the default favorite in any regional conflict.

There is a reason to believe India has the advantage due to several factors. Namely, the Doklam’s terrain suits the mountain warfare-experienced Indian army, which has fought Pakistan for decades on the elevated ground of Kashmir. India also has a better-led force, better training, and more combat experience compared to the Chinese military.

China claims the Doklam Plateau, but the area is currently the territory of Bhutan, whose rights are backed up by India. This area is strategically important to both sides. For China, it borders Tibet, and to Beijing is Chinese territory per the Treaty of Calcutta signed with the British Empire in 1890. This claim has persisted even though the treaty predates Communist Party rule in Beijing by nearly sixty years. For India, its defense of Bhutan’s claim is essential as it leads to West Bengal and helps link the State of Sikkim to the rest of the country.

Doklam is rugged, mountainous, and elevated, which makes military operations in the area difficult, prohibiting the use of more massive units like armor and mobile artillery. Because of this, the fighting there would depend on small-scale infantry units. The Indian military and the PLA would also be heavily reliant on air support (combat and logistical), and artillery stationed on flatter ground. Both armies operate aircraft that have ceilings ranging from twelve thousand feet to fourteen thousand feet, which makes airpower more practical for mobility.

Moreover, the militaries of China and India have been becoming more professionalized in recent decades. Both powers are spending ever more substantial sums on training, new technology, and equipment for their militaries. According to the Stockholm International Peace Research Institute, China spends close to $215 billion per year on defense expenditures, and India around $55 billion a year. These figures should be treated with skepticism since the official state figures of both can be deliberately inflated or deflated. However, despite this dubious spending advantage for China, these numbers do not reflect the true fighting quality of the belligerents.

China and India both have equally matched equipment capabilities. Additionally, either side would be heavily dependent on aircraft for their land forces to function. Both militaries also have the same number of various fixed and rotary wing aircraft. They have Russian, European, and domestically-made machines, all of which would all operate at the same altitudes. The terrain of the region would also push aerial equipment on both sides to the breaking point given the extreme heights of the area.

In addition, the PLA has a technological and qualitative edge given that the Chinese defense industry has a longer track record compared to India. However, one unknown is how late-model domestically-built Chinese made aircraft such as the Z-19 attack helicopter (introduced in 2012) would fare—if they would even appear in fighting in Doklam at all. Furthermore, most domestically-produced Indian aircraft have received abysmal reviews in testing, with clients chiding the quality.

Both the Indian Army Aviation Corps/Air Force are due to receive American made Chinooks, Apache attack helicopters, and Boeing C-17s over the coming years. (Though in this scenario these aircraft would be unavailable.)

However, the Indian army far outpaces the Chinese regarding actual combat experience involving small units in uncertain environments. The officer and NCO corps of the Indian military is made up of veterans of tense standoffs with Pakistan. Indian land forces have also served in volatile UN peacekeeping operations abroad in locales ranging from the Congo to Somalia, and South Sudan. Not to mention those who have served in fighting India’s various internal insurgencies such as in Kashmir and against the Naxalites in the center of the country.

The Indian army also has extensive mountain warfare experience. Delhi has deployed its troops to some of the most inhospitable battlefields in the world such as the infamous Siachen Glacier. That is a location where India has been engaged in on and off fighting with Pakistan since 1984. In fighting an adversary in an elevated position such as Doklam these skills would provide a decisive edge.

The Chinese are just beginning to introduce their forces to complex ground operations. The PLA in recent years has sent its troops on limited deployments to eastern Africa, but this cannot make up for the lack of extensive ground combat exposure and training the Indian Army has. Even though the PLA Ground Forces has been introducing more realistic training, there is still a considerable lag. For instance, RAND analysis predicts the People’s Liberation Army will not fully implement the new preparation program until 2025.

The decisionmaking mechanisms of the PLA Ground Forces are also less developed compared to India. Lower echelon leadership in the People’s Liberation Army often defer taking responsibility for decisions. Instead, they prefer to send major tactical and operational level questions up their Chain of Command. In small unit battles, this would be disastrous for the Chinese since this level of action is dependent on the decisions of junior leaders.

All of this is not to say that the Indian Army has some real weaknesses. Delhi’s defense bureaucracy is plagued by endemic corruption that has deprived the army of tens of millions of dollars meant for modernization. For example, a 2012 letter to the prime minister from Army Chief G.K. Singh said that “The state of the major (fighting) arms, i.e., mechanized forces, artillery, air defense, infantry, and special forces, as well as the engineers and signals, is indeed alarming.” In the same letter, he stated that the infantry, as well as special forces, lack critical equipment like night vision and “essential weapons.” These problems illustrate that while the Indian army might be a battle-hardened force, it still has issues that negatively impact its combat readiness.

If India and China did come to blows over Doklam, there have been signs that Beijing would seek to win the clash in other spheres. Analysts perceive that the PRC would rely on the same tools it has used successfully to advance claims in the South China Sea. These would include undermining India’s defense of Doklam through legal, diplomatic and public relations means.

Chinese military planners have also given significant thought to developing a conventional strategy to win a war with India. Given the environment the forces would be operating in, the PLA has built much of its ground combat capabilities around mountain warfare. The PLA would aim to rapidly knock out India’s critical positions in Doklam before Delhi has time to respond. From the Chinese perspective, this would keep any violent outburst relatively bloodless while ensuring Beijing’s claim to the plateau solidified.

Regardless of the outcome, an actual China vs. India armed conflict over Doklam would carry severe repercussions for both emerging powers. Financial markets would react negatively to the crisis, and it would spark fears of a broader war in Asia that would hurt critical trade in the region. It could even add a nuclear dimension to the tensions between the two, especially if New Delhi comes out on top since the loser might resort to upping the geopolitical stakes.

Going forward, the United States should continue to build closer ties with New Delhi as well as reinforce Bhutan’s claims to the Doklam Plateau. Acknowledging India’s support of Bhutan would show Beijing it will not be allowed to bully its way through the Himalayas, and that Washington supports its allies. Finally, taking a strong stance in South Asia would set the tone on how to deal with China’s increasing aggression not just here, but elsewhere as well.

Kevin Brown has spent the past four years working in the international public affairs realm. He has just finished the requirements for his MSc. in International History from the London School of Economics and Political Science (LSE). The author would like to give credit to Dr. John Hemmings at the Henry Jackson Society for his mentorship in writing this essay.