Who's Afraid of Nationalism? 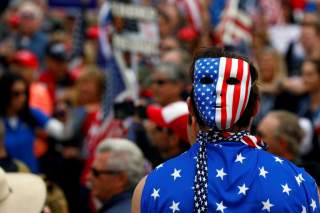 Marxism has its place in civilized discourse, as do questions about the morality of nuclear weapons. Even torture, slightly euphemized, is a suitable topic for debate; there are two sides at least, each with something to say. But next to nothing can be said for nationalism, which is all but a synonym for racism, persecution and war. Nationalism was responsible for World War I. Nationalism was behind the Nazis. And so on.

Yoram Hazony, an Israeli political theorist, will have none of this. Over the past two years Hazony’s byline has appeared frequently in the Wall Street Journal, where he has challenged many of the assumptions of modern liberalism, including the idea that there is such a thing as “illiberalism.” In the pages of the quarterly journal American Affairs, Hazony and his Herzl colleague Ofir Haivry have set out to construct a new genealogy of Anglo-American conservatism, one in which John Fortescue and John Selden loom larger than John Locke. The Virtue of Nationalism draws together many threads of Hazony’s recent work, weaving them into a larger tapestry—a picture of nationalism and its alternatives, above all the worst alternative, as Hazony sees it: universal empire.

The book sets out a theory of nations and nationalism. Drawing upon biblical precedent, Hazony understands a nation to be the product of a fusion of tribes. The tribes are made up of families, but this is not to say they are purely blood-based: families, after all, include members by choice, such as spouses and members by adoption, as well as members by birth. Tribes with a common language and faith and experience of fighting common foes have reason to band together into a larger entity, the nation, which takes political precedence over its components. Tribes are prone to feuding among themselves, leaving them at their mercy of their enemies. By subordinating the tribes to a superior authority, the nation establishes conditions in which self-determination and its constituent elements’ freedom can flourish.

Hazony does not much care for Thomas Hobbes, whom he interprets—following Leo Strauss, among others—as a liberal individualist in principle. The freedom that concerns Hazony is not the freedom of the detached individual but the freedom of the groups to which he belongs. Organic loyalty—the love of parents for children and children for parents, of siblings and cousins as well as husbands and wives for one another, as well as soldiers for their squadmates—is the glue that binds the tribe, and above the tribe, the nation. A nation of individuals is a contradiction in terms, for nothing would attach the individual to authorities above himself in the absence of such particularistic loyalties. Only force and cash would connect citizen to citizen and citizen to state in the absence of a tribal framework.

Nationalism is a virtue because it is the sum and expression of lower, more personal types of fidelity. There is also virtue in the way the nation leaves its components free to achieve their own excellence—to practice and perfect the virtues of religion, family and community. There is room for the individual here, in the intersections between these groups and between them and the nation at large. Hazony also takes care to note that no nation in reality is entirely homogeneous or organic: there are always some strangers in the midst of the tribes in a great nation, and allowances ought to be made at every level to respect those strangers’ persons and practices. Hazony is no advocate of intolerance. He is, however, an unembarrassed advocate of a nation’s freedom to set its own standards of hospitality, as well as its freedom to define its membership on its own terms.

All of this fits the Israeli experience, both biblical and modern, reasonably well. Squint a little and perhaps it describes certain European nations also, with their roots in shared language, tribal ties and conflicts with neighbors. Hazony describes the United States too, however, as a nation-state in this sense, with the individual states serving as the discrete “tribes” that compose the nation. He allows that today other kinds of groups, including interest groups, may also have a tribe-like character. This is all something of a stretch, if taken quite literally: North Carolina, however distinctive it might be, is not a “tribe.” Hazony does not devote enough attention to the United States to explore how it might be “tribal” in a loose but still accurate sense. He might have done well to say more about America’s patchwork of religious and racial elements as virtual tribes. Even then, there would be grounds for skepticism—but if nothing else, Hazony has ventured a hypothesis worth testing. Could even America, diverse and individualistic as it may seem, be a tribal nation?

Liberals will not be satisfied with the allowances Hazony makes for minorities. Hazony challenges them upon their own ground. Is the universalist tolerance they prescribe, based in abstract human rights, really so tolerant? Universalism, by its nature, admits no exceptions, and when universal claims are supposed to be grounded in reason, the upshot is that anyone who dissents must be unreasonable: either stupid or irrational or willfully perverse. Nations can respect other nations for the same reasons they demand respect themselves, and tribes can do likewise. But a universal power has no peer; it recognizes no other of equal status. It therefore is inclined to conquest. Hazony argues—rather lightly and more by implication than by demonstration, it must be said—that universalism in theory leads to empire in practice.

Most of the human race for most of its history has lived in either imperial and tribal settings. The nation is an unusual political development. Hazony identifies biblical Israel as its beginnings, but nationalism only comes to Europe after the Protestant Reformation, whose biblical foundations lead to the creation of Israel-like nations that do not aspire to universal empire. The Catholic Church and the Holy Roman Empire, in Hazony’s account, aspired to precisely such unlimited dominion. Hazony refers to the “Protestant construction” of the West, a political order that emerges after the Treaty of Westphalia and leads to a number of distinct national states, most characteristically those of England and the Netherlands—both of which were at times threatened by “Catholic Spain,” with its Hapsburg ties to the Holy Roman Empire.

There is much truth in this, but Hazony overstates his case, and he lets his theory lead his understanding of history—or rather, mislead it. Not every empire aspires to universal dominion, and not every universal ethical or religious system translates into worldly imperialism. The history of the Middle Ages is far more complex and contradictory than Hazony’s theory and capsule history allow. Though it is never safe to generalize about a thousand years of European history, to the extent that one can say anything about the Catholic Church’s outlook in the Middle Ages, one must take account of its fears of being overawed by secular power—especially by the prospect of a single ruler coming to reign over a resurrected Western Roman Empire. Both politically and intellectually, “papal” and “imperial” parties were long at odds, with the optimal arrangement for the church being one in which secular authority was divided and deferential. The church was quite comfortable exercising universal spiritual dominion in the absence of a parallel political structure, which in fact could only have compromised the church’s autonomy.

The imperial party at times did present its cause as having universal moral force as well as aiming at universal—or at least pan-Western—worldly power. The poet Dante, for example, was a partisan of empire who argued that it was the means by which world peace would be established, on the example of the ancient Pax Romana. Yet the medieval imperial tendency in the politics of Christendom does not really fit Hazony’s model either. For one thing, medieval imperial theorists of sovereignty such as Marsilius of Padua helped lay the groundwork for later ideas of national sovereignty and the separation of political and spiritual authority along lines quite different from those imagined by Rome. The imperial party was, in a sense, also the proto-nationalist party.

The Holy Roman Empire itself, for that matter, was not exactly an “empire” in Hazony’s sense. The emperor was often—though certainly not always—a weak figure who was little more than the nominal head of a great patchwork of independent principalities, cities and other jurisdictions. This medieval “Roman Empire” bore little resemblance to its titular antecedent, the empire built by the Caesars. The old jibe of Voltaire’s—neither holy nor Roman nor an empire—stands.

The contrast between “empire” and “nation” in Hazony’s account breaks down under scrutiny. He presents the Holy Roman Empire as universalistic and predatory, which at times it could be. But that empire was born—after some intermediary stages—from the eastern components of the empire that Charlemagne constructed, which was the closest thing the Middle Ages ever saw to a truly reborn Western Roman Empire. The Carolingian empire self-liquidated, however, breaking up among Charlemagne’s descendants. The Western portions of the empire became the basis for France, one of the earliest and often most aggressive, nation-states in Europe. Was the Holy Roman Empire more expansionist than France, as Hazony’s theory would suggest? Not exactly. And the Protestant nations that rose to great power after Westphalia were also not exemplars of foreign-policy restraint: the Dutch and English built overseas empires as soon as the opportunity presented itself. Hazony acknowledges this, but he downplays what it means for his empire-vs.-nation schematic.