Why Afghanistan Has Crumbled 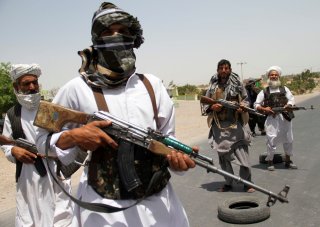 Much like Iraq in 2011, the departure of the U.S. military from Afghanistan has created a security vacuum causing the situation in the country to deteriorate at an alarming rate. Emboldened by the U.S. military withdrawal, the Taliban have captured over 120 of Afghanistan’s 387 districts. The Taliban have also seized Afghanistan’s main border crossings and transit chokepoints with Tajikistan and Turkmenistan in the north, with Iran in the west, and with Pakistan in the south, essentially laying an economic blockade around the country. Such a massive loss of territory to the Taliban in just sixty days of fighting is sending shockwaves around the world and is reminiscent of the dreadful chaos created by the Islamic State in the Iraq region in 2011 after President Barack Obama withdrew U.S. troops from that country. Today, Afghanistan, along with the region, is facing a “humanitarian crisis,” which I warned against in an article earlier this year.

Analytically, there are four tactical, operational, strategic, and political factors that explain the massive loss of territory to the Taliban. This analysis should help the Afghan government take corrective measures, respond to its vulnerabilities, and turn the situation around.

Beginning in 1994, the Taliban’s traditional stronghold has always been southern and southeastern parts of Afghanistan along the troubled Pakistani border. Hence, the Afghan National Defense and Security Forces (ANDSF) have been deployed heavily in this part of the country, leaving the northern, central, and western parts of Afghanistan vulnerable. For example, four of the six Afghan National Army’s Corps are stationed in the south and southeast provinces of Kandahar, Helmand, Paktiya, and Nangarhar, while only one corps is stationed in the north and one in the western province of Herat bordering Iran. Additionally, the U.S. military’s departure from the country unraveled significant vulnerabilities in the ANDSF’s northern flanks and opened an opportunity for the Taliban to exploit them.

As a result, northern Afghanistan saw the first wave of loss of districts to the Taliban. This situation also reflected the failure of Afghanistan’s national security apparatus to assess, recognize, and fill these vulnerabilities. Micro-managed and mishandled by political leaders in Kabul, the ANDSF Command failed to identify weak points and respond to them by strategically realigning troops, reinforcing their defenses, and reconstituting combat power where it was most needed in a timely fashion.

2.   Lack of Stable Command and Control

In the past ten months, Afghanistan’s minister of defense was absent from the country’s war theater. Due to tense political divisions in the Afghan government’s leadership, President Ashraf Ghani kept the defense minister’s post intentionally unoccupied while the war was taking the lives of tens of military personnel as well as civilians every day. Against this backdrop, the president essentially took charge of the war himself. He ran the military with a few civilian aides from the presidential palace where rookie political aides—not experienced military strategists—were dictating tactics, operations, logistics, deployments, and strategy. Ghani repeatedly reshuffled other senior command staff, including the Army chief of staff, within the Ministry of Defense for political reasons. This further undermined the military and left the ANDSF Command in total disarray. To make matters worse, during this critical time, the president sacked the Afghan minister of the interior—leaving the country’s second security ministry that is in charge of the Afghan Paramilitary National Police Force without leadership.

Consequently, command and control at the strategic level were absent. Soldiers at the battalion and company commander levels were making incoherent tactical decisions themselves with no stable leadership at the top to lead and coordinate strategy, operational deployments, logistics, and support requirements. All along, while the political elites in the Presidential Palace were playing divisive tribal politics, Afghan soldiers were paying the ultimate sacrifice—fighting bravely and dying with dignity on the battlefields. One sad and shocking episode resulting from lack of stable command and control in the ANDSF was the loss of twenty-two Afghan commandos who were summarily executed by the Taliban after they ran out of ammunition following an intense fight in Faryab province. The commandos had repeatedly called for backup. In absence of command and control to effectively coordinate the warfighting effort, there was no backup to arrive.

Two weeks ago, in an effort to stop Taliban advances, Ghani appointed two new defense and interior ministers and a new Army chief of staff with the right qualifications. However, it was a little too late. The damage was already done and the ground was already lost. The mismanagement had already inflicted a heavy toll on the morale and fighting spirit of the ANDSF. This situation is reflective of the poor political leadership in Kabul where division, exclusionary politics, favoritism based on ethnic affiliation, nepotism, and tribalistic mentality in the halls of power of Afghan politics are bringing the country to its knees.

Deep division within the Afghan political leadership has contributed greatly to the situation’s deterioration—a point repeatedly underscored by President Joe Biden in his troop withdrawal speech on July 8, 2021. When Biden decided to withdraw all American troops from Afghanistan by September 2021, his close aides and advisors, like many others, did not envision Afghanistan to falter so quickly. Nor did they expect the Taliban to make major military gains so rapidly across Afghanistan.

The Biden administration had good reasons for its assumptions. After all, the United States had helped train, equip and fund over 340,000 soldiers of the ANDSF and had spared nothing in supporting Afghanistan in the past two decades. However, signs of such an unraveling had persisted since the 2014 rigged presidential election. Intense political infighting continued in the wake of yet another rigged presidential election marred by massive voter fraud in 2019 after which the two main contenders—Ashraf Ghani and Abdullah Abdullah—declared themselves president and held simultaneous swearing-in ceremonies in Kabul a couple of blocks apart from each other. During both the episodes of election rigging, Ghani’s team was deemed culpable both nationally and internationally.

Twice losing the people’s trust in the face of documented electoral fraud accusations, Ghani and his clique became too defensive and insecure. To shield himself from critical feedback, Ghani entrenched himself in the company of deeply loyal aides—most of them too young and inexperienced for the jobs they occupy. Surrounded by an exclusionary-minded group of aides who are essentially from the same village as the president himself—in one of the most ethnically diverse countries in the world—the president made decisions that are highly exclusionary in nature and often prejudiced against other communities who do not come from his tribe. This situation alienated other people including Durani Pashtoons, Tajiks, Hazaras, Uzbeks, and Turkmens—all of Afghanistan’s major ethnic groups. Accordingly, almost all of President Ghani’s decisions, even on security and military affairs, were driven by politics designed to benefit the president personally and tribally rather than benefiting the national interest of the country. This situation plunged Afghanistan into a permanent state of political infighting and took a heavy toll on the performance and morale of the ANDSF.

In the wake of the 2014 Afghanistan election rigging drama, which threatened the collapse of the country’s system, the United States stepped in to save the day. Then-Secretary of State John Kerry brokered a National Unity Government under an agreement between Ghani and Abdullah’s camps. However, Ghani immediately violated the terms of the agreement, and for the rest of the term of the government, he used every opportunity to undermine and outmaneuver Abdullah and his office. The resulting political infighting wreaked havoc in the country. When Afghan politicians repeated the same election rigging drama in their 2019 presidential election, the United States had lost its patience and started to contemplate withdrawing from the country altogether. In this context, Afghanistan had every opportunity to prepare itself for today’s eventuality. However, the Afghan political leadership in Kabul was just not up to the task.

Poorly supplied rural districts are easier for the Taliban to capture and more difficult for the ANDSF to protect due to remoteness, unreliable logistics, and harsh terrain where the ANDSF is stretched thin. The Taliban’s strategy of focusing on seizing rural districts has two tactical and strategic aims. First, they are focusing on winning battles in thinly defended remote areas where the battlespace is too large and ANDSF troops are too few. Second, in strategic terms, these tactical wins create widespread public fear and panic across the country, cause loss of morale in the ANDSF units, and threaten the security of highways and supply systems of the country.

Faced with competing priorities and limited resources, Afghan forces have tactically withdrawn from some outposts considered too hard to defend. Given resource constraints, tactical withdrawal makes sense at the tactical level. Politically, however, it undermines the government’s influence. The government is only strong where and if it has presence among its citizens. Strategically, abandoning these remote districts gives the Taliban the ability to threaten and seize control of economic checkpoints and logistical lifelines such as border crossings and transit routes from which Afghanistan collects customs revenue estimated at over $120 million a month. In the event that the northern and western supply routes are blocked off for more than three months, the government in Kabul will go bankrupt, and the country will experience skyrocketing inflation and dramatic shortages of food. This would make life—already fraught with difficulties—extremely unpleasant for Afghan citizens and a humanitarian crisis, already underway, would engulf the whole of the country.