Why is America Addicted to Foreign Interventions? 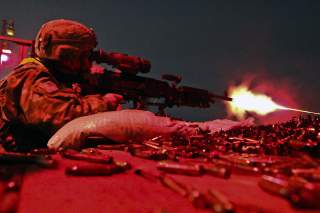 At a time when the United States is preparing to increase Pentagon spending and escalate troop deployments overseas, an analysis of U.S. military interventions since the country’s founding highlights two important and related dynamics.

First, the empirical distribution of military interventions––that is, the deployment of U.S. armed forces to other countries––is not evenly distributed; and in fact is highly skewed, in terms of frequency, to favor the historical period following the end of the Cold War (1991).

Second, U.S. military interventions since WWII have only rarely achieved their intended political objectives. That is, the United States has lost more than won; and when it has “won,” it has generally won at a cost far in excess of what would have been considered reasonable prior to the intervention.

This leads to an important puzzle: if U.S. military interventions are failing more often, what accounts for the dramatic increase in their use since 1991?

As these data reveal, the rate of intervention across time is not monotonic, but jumps during the two world war periods (1917–18), as well as the Cold War (1948–91). One implication being that the world wars forced the United States into a permanently international posture, and at the same time, as a consequence, resulted in the conscious development of reach: the raw and almost unique capacity among peer competitors to rapidly move armed forces across the globe and support them during sustained offensive operations.

If we further refine the data to compare Cold War and post–Cold War intervention rates, something truly striking emerges: while the United States engaged in forty-six military interventions from 1948–1991, from 1992–2017 that number increased fourfold to 188.

These statistics introduce two important puzzles. First, why would military interventions rise at the same time success in military interventions has been declining? Second, why would military interventions increase after the Cold War, when both an ideological rationale for interventions (say, to rescue peoples in danger of falling into a Soviet, and by extension, authoritarian, orbit) and a material existential threat to U.S. national security (no more dominoes, a reduced threat of deliberate thermonuclear war) had declined? In other words, if the United States only intervenes with armed force when its vital interests are at stake, why intervene more often when there are arguably fewer vital interests at stake? The answer is that Washington too often intervenes militarily when it should not—and U.S. security and prosperity have both suffered as a result.

Since 1950, strong actors in asymmetric conflicts (not limited to, but certainly including the United States) have lost a majority of fights with nominally much weaker adversaries (up until 1950 strong actors had won a majority of such fights). As Ivan Arreguín-Toft revealed in his 2005 book, How the Weak Win Wars, large actors like the United States beat small actors such as Vietnam 88 percent of the time from 1800–49; and their chances of victory declined from there. They won 80 percent of their conflicts from 1850–99, but only 65 percent from 1900­–49. For the last period, 1950–98, success proved elusive. Strong actors—including the United States and Soviet Union, the two so-called ‘superpowers’—lost more wars than they won: losing 45 percent of the wars they fought.

An important theoretical contribution related to the above puzzles includes T.V. Paul’s (1993) and my own on time horizons as a rationalist explanation for war (2007). Paul’s work engaged the puzzle of why weak actors initiate armed conflicts with much stronger adversaries. Paul demonstrated that one answer to the question of how a rational actor might pick a fight with a much stronger adversary had to do with time horizons: often calculations of net benefit involve very short term assessments. If time is extended, the likelihood of net benefit plummets. Thus, it may be that something structural in U.S. calculations tends to concentrate assessments of risk and benefit into short time horizons, explaining both unwarranted optimism and a high failure rate. My work on time horizons demonstrated that Paul’s conjecture was correct: if two rational actors come to a conflict of interests with very different valuations of time-to-objective, they may find themselves escalating to unwanted war which in retrospect appears irrational.

Going forward we are left with a number of important questions. First, we know that along with material considerations, culture, identity, and history affect states calculations of the risks and benefits of military intervention. After years of struggle and investment, China has at last succeeded in creating a military and economy capable of securing it against any outside attack, but its history of insecurity and a desire to redress past ‘humiliations’ drive its calculations just as surely as material considerations. To outsiders, the past five years have called into question whether China remains insecure, as it insists, or is actually bent on global hegemony, which would be more consistent with its accelerated military spending and its provocative deployments in the South China Sea. Similarly, a common reading of recent increased U.S. military spending, along with its accelerated deployment of armed forces abroad, is that the United States is an aggressive power, committed to maintaining the post–Cold War status quo. So assuming states weigh gains and losses of national identity along with material costs and benefits in determining whether to intervene militarily abroad, how does identity compare? For example, in considering direct military intervention in Vietnam after 1963, what was more important to the United States? The material loss of a tiny and very distant ally, or its own reputation as leader of the free world, and defender of the weak?

Second, given the dismal record of failure in military interventions since WWII and especially after 1991, what accounts for its persistence as a tool of U.S. statecraft? One strong possibility is that the costs of failure––given the extraordinary reach of American armed forces and the relative geopolitical isolation of the continental United States––have never risen to the level of an existential threat as compared to the possibility of success, however small. Another is that military interventions both signal ‘toughness’ and, as just observed, don’t appear to entail a serious risk to U.S. sovereignty and security. Thus, the benefits for political elites in Washington, of looking tough outweigh the costs and risks of failure, which can almost always be blamed on factors beyond their control, or on political opponents or third parties. Our elites don’t pay the costs.

Answers in the academic literature include an emphasis on more modest political objectives (say, simply stopping whatever horrible thing is ongoing and then leaving), multilateral efforts (acting in tandem with allies entails considerable joint operations costs, but these are almost always redeemed by the boost in legitimacy multilateral efforts bring), ensuring long-term public support (U.S. support for publicly known military interventions rarely lasts more than three years, yet most experts agree that interventions capable of ‘winning the peace’ tend to require at least seven to ten years to succeed), and increased reliance on other-than-military resources in support of interventions (armed force will almost always be needed to some degree, but if as a proportion of resources applied armed force is excessive as compared to say, aid, law enforcement and diplomatic efforts, interventions will fail).

U.S. Military Interventions in the 2020s

The United States does not view itself as an aggressor state, but with the brief exception of the Obama administration (2009–16), whose core energies were absorbed with holding the U.S. and global economy together along with mitigating the impact of two unwinnable wars, the United States has become both more interventionist and less likely to cleave to its core principles of opposing genocide (e.g. Rwanda, Darfur) and abiding by the rule of law (e.g. Guantanamo Bay, Abu Ghraib). It has fought two fantastically costly wars, won neither, and then insisted that Iran not acquire the means to defend itself. Allies and adversaries alike may therefore be forgiven for reimagining the United States as an aggressor and a possible threat to the international order.

The U.S. military currently counts over 1.3 million personnel on active duty, with over 450,000 of these currently stationed overseas. The United States spends more on its military than the next eight states combined, and still twice as much as China and Russia combined. Many continue to identify the period following the collapse of the USSR in 1991 as a “unipolar moment,” in which the United States was the sole remaining superpower. And the U.S. military is invariably referred to as the world’s most powerful by far. The problem is, even in the absence of the increased military spending currently planned, this characterization remains as true as it is irrelevant.