Why America Is Blind to Serbia's Bright Future 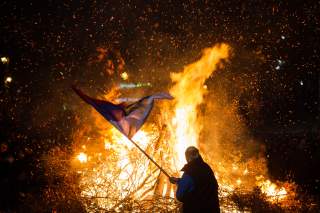 Vladimir Putin’s visit to Belgrade on January 17 poses an interesting question—are China and Russia making inroads into Serbia due to Washington’s neglect?

The numbers speak for themselves. The last U.S. president to visit Belgrade was Jimmy Carter in 1980. Vladimir Putin, on the other hand, is making his fourth trip to Serbia since coming to power in 2000 (in addition to which Dimitri Medvedev paid an official visit to Belgrade in 2009 during his tenure as Russian president). Moreover, Putin has met with the current Serbian president, Aleksandar Vucic, at least fourteen times so far.

And the Russians have not been alone in courting Belgrade over the past few years. Chinese president Xi Jingping paid an official visit to Serbia in 2014 and has another visit planned for later this year. All told, Jingping has had five official bilateral meetings with his Serbian counterpart since 2014.

In contrast to what the Chinese and the Russians are doing, there has never been an official bilateral meeting between a president of the United States and a president of Serbia (or its predecessor, the Federal Republic of Yugoslavia).

Several factors explain this difference in approach the major powers have towards Serbia. First, much of American policy towards the Balkans is a legacy of the 1990s, when policymakers such as President Bill Clinton and Vice President Al Gore decided that supporting “Muslim causes” in the Balkans would improve America’s standing in the Islamic world.

Unfortunately, the 9/11 attacks—several of whose organizational, financial, and operational executors were Bosnian jihad veterans—revealed the intellectual facileness and paucity of such naïve beliefs. Indeed, from the 1990s through to today public opinion surveys across the Arab/Muslim world consistently show large disapproval ratings for the United States, despite the U.S. military interventions in the Balkans.

A second reason why policymakers in Beijing and Moscow have been busy visiting Belgrade is because they know how to read a map. The most important land and riparian transportation corridors between Western Europe and the Eastern Mediterranean, and between the Baltic and Aegean Seas, run through Serbia. The Chinese certainly recognize this, as the economic value of their investments in the country is now approaching $10 billion.

American Balkan policy, by way of contrast, has over the past two-plus decades focused on Bosnia and Kosovo, which in terms of geography and real estate are strategically of secondary importance, or intermittently on Macedonia and Montenegro (mainly to promote NATO integration).

Third, the Washington foreign-policy establishment appears unwilling to realize how much the world has changed over the past two decades. The United States is no longer (if it ever was) what Madeleine Albright called “the indispensable nation,” and in a multipolar world small countries now have political, economic, and strategic options. Put another way, both nature and international politics abhor a vacuum, and if Washington chooses not to engage with any given country, other states stand ready to move in as partners and investors.

Viewed from this perspective, it is difficult to see how Washington’s benign (or malign) neglect of Belgrade advances U.S. foreign-policy interests. As President Barack Obama once noted, it is “ridiculous” to believe that “not talking to countries is punishment to them.” Indeed, as president Obama was willing to go to decades-old U.S. antagonists such as Cuba and Vietnam, and president Trump has been willing to meet with Kim Jong-un, yet a quarter-century after the wars of the 1990s Washington still prefers keeping Belgrade officials at arms-length.

There is of course no strategic logic to this, but it does show the extent to which U.S. Balkan policy remains hostage to special interests and ethnic lobbies who believe that they benefit from driving as big a wedge as possible between Washington and Belgrade.

Such shortsightedness threatens to jeopardize the progress that has already been made advancing relations between Washington and Belgrade. A prime example of this is the frequent media portrayal of Serbia as “Russia’s outpost in the Balkans,” when in fact the reality suggests something much different.

Consider, for instance, Serbia’s relationship with NATO. Serbia is a member of NATO’s Partnership for Peace program, and has concluded a Status of Forces Agreement (SOFA) with the alliance. As defense analyst John Cappello has observed, “Serbia’s relations with the Euro-Atlantic alliance have never been stronger.”

Similarly, in a visit to Belgrade in April 2017, the late Sen. John McCain noted that the United States is Serbia’s most important defense partner, with the two countries engaging in ninety joint military activities a year. Most interestingly, the NATO Liaison Office in Belgrade is located in the building of the Serbian Defense Ministry, just one floor beneath the office of the defense minister himself.

Much the same applies with regard to Serbia’s attitudes towards the EU. The current Serbian prime minister, Ana Brnabic (who worked with USAID for a decade), has publicly said that if it came to a choice between Russia and the EU, then Serbia would pick the EU.

Unfortunately, in the context of a rapidly changing Europe, the question of how long such policies and relationships can be sustained remains open, especially if Serbia’s EU accession ever occurs. That event is projected to occur at least ten to fifteen years from now, and Washington—when it’s not imposing punitive policies on the country—prefers to ignore it.

Given recent moves by other major powers, a serious reappraisal of the state and trajectory of relations between Washington and Belgrade is long overdue. It is difficult to see what the United States gains by ceding the strategic and political playing field Serbia represents to Beijing and Moscow. If Balkan stability is understood as being about something more than just fulfilling the wish lists of Washington’s local clients, then a broader approach to dealing with the region will be needed.

As Putin visits Belgrade yet again, U.S. policymakers should think long and hard about improving relations with the Balkans’ most strategically consequential country.