Why America Can't Afford to Continue Waging a War in Afghanistan 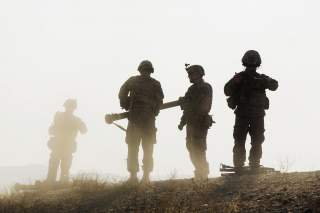 NATO’s Secretary General Jens Stoltenberg announced yesterday that the alliance will send three thousand more troops to Afghanistan in support of Donald Trump’s new strategy to confront the Taliban. NATO’s decision emphasizes the importance of making sure that the United States and its allies have good reason to keep going after such a long, costly and ineffective occupation. As Trump mulled over what he admitted was the difficult decision to remain in Afghanistan, two new arguments for staying the course emerged. Both arguments, unfortunately, are dangerously flawed.

The first argument is that Afghanistan should not be seen as a nation-building exercise but rather as a strategic asset—an “eastern flank in the broader fight against extremism and terrorism.” Regardless of whether the United States commits itself to helping rebuild Afghanistan, the claim that Afghanistan should be seen as a strategic asset is troubling. Most dangerous is the assumption that the United States needs bases in Afghanistan to counter violent extremism. Evidence from the past sixteen years makes it clear that a military approach is not the most effective means to combat terrorism or extremism.

In fact, in the nations where the United States has intervened since 9/11, terrorism and extremism have dramatically increased. While the Middle East’s volatility is largely attributed to the Arab Spring of 2011 and South Asia’s instability is linked with India and Pakistan’s nuclear weapons, political, economic and social conditions in both regions have been aggravated since the Global War on Terror began in 2001. Research, moreover, confirms that military defeat only rarely spells the end for terrorist groups. Given this and the historical evidence to date, there is little reason to believe that an extended American presence will provide any strategic benefits.

The second new justification is that even if the United States never defeats the Taliban, an American presence in Afghanistan will help prevent Pakistan’s collapse. To be sure, the consequences from a disintegrating Pakistan would be severe and would go well beyond South Asia. State failure could result in Pakistan’s nuclear weapons falling into the hands of ISIS and other terrorist groups whose aims include attacking the U.S. homeland. State collapse would also result in an unprecedented refugee crisis, putting pressure on a region that is already grappling with overpopulation and mass displacement. Thus, for some, U.S. forces in Afghanistan serve as an insurance premium for regional stability and are a cost worth paying.

To make sense this argument depends on believing that Pakistan would be in danger if the United States pulled out of Afghanistan. Pakistan’s disintegration, however, is neither imminent nor likely. Though Pakistan does grapple with domestic terrorism, the military establishment maintains that it has been successful in eradicating safe havens and militancy in general.

And more generally, the link between Afghanistan’s stability and Pakistan’s security is weak at best. In fact, Pakistan’s long-held policy of “strategic depth”—no secret to anyone in the region—is based on Afghanistan’s political and economic weakness continuing indefinitely. Furthermore, Pakistan’s approach does not depend much on who controls Kabul—Pakistan supported the Taliban since its founding, after all, and has strong incentives to work with Afghanistan. The bigger question is whether the United States feels comfortable with Pakistan having influence over Afghanistan.

Further, the idea that the United States is contributing to Afghanistan’s stability is also a dangerous misperception. The Taliban’s growing strength is largely in response to U.S. forces in Afghanistan. The United States is a foreign, occupying power. And the longer U.S. troops stay there, the longer they will serve as a rationale for militant insurgency—and also become targets for attacks. Trump’s reservations about the United States’ military presence in the country were well founded; there is little evidence to indicate the U.S. presence is keeping Afghanistan’s National Unity Government from collapsing. The source of the government’s weakness is corruption, abuse of power, political infighting and crime—none of which the U.S. military can, or should, control.

There are no good reasons left for an American military presence in Afghanistan. The only viable option left is to design a roadmap for negotiating a diplomatic settlement with key actors within Afghanistan, which must include the Taliban. Though such an approach will not deliver the clear victory President Trump promised, putting an end to a costly and failed policy is the best outcome available.

If the United States does not pursue a diplomatic solution, then the only certain outcomes in Afghanistan are more American casualties, billions more wasted dollars, and growing resentment by many in the region of continued American interventionism.

Sahar Khan is a visiting research fellow at the Cato Institute

A. Trevor Thrall is a senior fellow at the Cato Institute’s Defense and Foreign Policy Department and associate professor at George Mason University’s Schar School of Policy and Government.

Image: U.S. soldiers from D Troop of the 3rd Cavalry Regiment walk on a hill after finishing with a training exercise near forward operating base Gamberi in the Laghman province of Afghanistan December 30, 2014. REUTERS/Lucas Jackson