Why America Can't Win in Syria 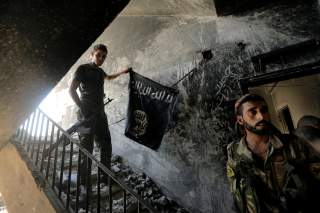 Vladimir Putin, the man who has dominated Russian politics for the last seventeen years, flew into Syria this week for the first time since he ordered the Russian Air Force over two years ago to drive back Syrian rebel groups encroaching on Bashar al-Assad’s presidential palace. When Russian bombers first began their campaign, Assad’s regime looked to be on the brink of collapse. Now, the Syrian strongman is confidently resting in Damascus—his opponents, many of whom are demoralized and tired of a war now in its seventh year, are increasingly wondering if their goals of overthrowing the regime are lost.

While it may be convenient for many in the United States and Western Europe to label Putin’s military gamble in Syria a unconditional victory for the Russians and an unfettered disaster for Washington and Brussels, the Syria story is still being written. And notwithstanding Putin’s declaration of victory on a Russian airfield and his ceremonial inspection of impressive-looking Russian honor guards, Moscow has now put itself in the position of being on the hook for the Assad regime’s continued success. Indeed, by coming to Assad’s rescue in September 2015 and enabling his government’s territorial gains over the last two years, Russia is now intimately responsible for Syria’s future.

Militarily speaking, there is no question whatsoever that Bashar al-Assad is winning the war. When it has not been overpowered by extremist factions on the ground or co-opted into irrelevance, the moderate Syrian opposition has been left to rot in Eastern Ghouta or pushed into ever-shrinking portions of Syria’s northern Idlib province. A year earlier, most observers of the conflict would have found the notion of the Syrian regime recapturing the eastern city of Deir ez-Zor a fanciful proposition.

In reality, it was anything but fanciful. Deir ez-Zor has been cleansed of Islamic State fighters who for years were previously encircling Syrian troops in the heart of the city. The Syrian government controls all of the key access points, airports, ports and population centers it would need to retain at least nominal control of the country. In perhaps the clearest manifestation of the regime’s military success, the West has largely lost interest in Assad’s political future. In years prior, Bashar al-Assad’s eviction from the presidency was a red line for the West and a condition that Washington was insistent on during the UN-facilitated intra-Syria negotiations held in Geneva. Now, even Saudi Arabia has privately acknowledged that Assad’s departure during a theoretical Syrian political transition is unachievable and that the political opposition needs to come to terms with the reality of the dictator staying in office for the near term.

Yet even as the trajectory of the civil war is going the regime’s way, Syria is in tatters. The nation is broken, with a divided society, a completely destroyed economy and an incompetent and corrupt political system that will likely encourage some of Assad's opponents to fight on. The confidence Vladimir Putin showed this week during his meetings with Syrian government officials is in many ways a deceptive mirage; when one looks closer, it is clear that an Assad victory does not correlate into a healthy and functioning state that has control over its sovereign borders or can survive independently.

Syria’s war has been incredibly costly, not only to its people—approximately four hundred thousand people have been killed during the course of hostilities—but to its economic potential and its social unity. According to the United Nations Office for the Coordination of Humanitarian Affairs, 13.1 million Syrians (approximately 72 percent of the population) is dependent on humanitarian assistance from international donors to get through the day. Over six million Syrians are internally displaced, stranded in other parts of the country and unable to go back to their homes due to the security situation. In many cases, there are no homes to come back to. Over five million Syrians have fled for refugee camps in Lebanon, Turkey and Jordan that are overcrowded, struggling to cope with the capacity, and often devoid of international funding.

Whatever potential Syria’s national economy had before the civil war is now gone. By any rational estimation, it will take generations for Syria to recover to its pre-war status. The World Bank has calculated that the fighting and physical destruction associated with over a half a decade of conflict have cost the Syrian government $226 billion in cumulative losses. That assessment includes medical infrastructure, an educational system, and overall public infrastructure that is dilapidated and ineffective at best. The World Bank reported that “27 percent of the housing stock has been impacted, with 7 percent destroyed and 20 percent partially damaged.” Half of the medical clinics and hospitals have either been destroyed completely or damaged—exasperating a dire humanitarian emergency in the country by preventing millions from access to basic medical care. If you look at the video footage and pictures coming out of Syria today, you will likely see entire cities—Raqqa, Aleppo, the southwestern and northeastern Damascus suburbs, Idlib, and former rebel-held districts in Homs—leveled to the ground.

Why does this matter to Putin? Because the Friend of Syria contact group—a collection of wealthy countries including the United States, the United Kingdom, France, Saudi Arabia and Qatar—has made it clear that no reconstruction assistance to Syria will be offered from the grouping unless Syria goes through the political transition process dictated by multiple UN Security Council resolutions. Speaking to the State Department press corps on September 18, Acting U.S. Assistant Secretary of State for the Near East David Satterfield stressed the point that if Assad survives, he is on his own. “[T]he regime and the regime’s supporters cannot declare a victory solely based on a map and colors of positions on the ground,” Satterfield said. If a transitional process does not happen, the international community is “not going to contribute to a legitimization or authenticization or to the reconstruction of Syria.”

Without financial aid from the West and the Arab world, an Assad-led Syria will struggle mightily to bring some sense of normalcy in the post-war environment—an objective that the dictator may hope to accomplish if for no other reason to buttress the idea that he has legitimacy in the eyes of his people. For Putin, this means that Moscow has a decision to make: it can either step into the breach and spend tens of billions of dollars rebuilding a weak ally, or it can pull out and hang the Assad regime out to dry. The former will be an exceedingly expensive proposition for Putin to implement, particularly when the Russian economy grew at a lower quarterly growth rate than anticipated. The latter would mean that Russia’s closest ally in the region would be in a permanent, decrepit state of disrepair, unable to defend its own national security without the intervention of foreigners like Lebanese Hezbollah, Iraqi Shia militiamen, and Iranian Revolutionary Guard Corps operatives.

By virtue of sustaining Assad’s rule, Putin and his Iranian partners are now de facto responsible for ensuring that the Syrian state is at least semi-functional and able to combat any security challenge that presents itself. Given the lack of capacity of the Syrian army after tens of thousands of deaths, injuries and desertions, it will take years before Assad can contain threats to his rule on his own—if he ever can. The last thing Moscow can afford after so much investment in Assad’s survival is a pyrrhic victory, one that would expose Putin’s war plan to be more of a mistake than a act of genius.

Syria holds a lesson for the United States, too, one that Washington should have learned from sixteen years of military intervention across two continents and several countries. And the lesson is this: beware of tactical advances masquerading as strategic victories. Gains on the battlefield are not enduring and frequently require a massive amount of investment in blood and treasure to have a possibility of becoming a reality. It is far costlier to spend the billions of dollars and devote the immense military and political resources typically needed to sustain a victory than scrambling the fighter bombers and deploying special forces to help allies win territory. In foreign policy as in life, it is better to think about the consequences before you make a decision and act on it.

Daniel R. DePetris is a foreign policy analyst, a columnist for Reuters, and a contributor to the Washington Examiner.”

Image: A member of the Syrian Democratic Forces calls his comrades during the fighting with Islamic State fighters in Raqqa, Syria, August 14, 2017. Zohra Bensemra: "The Reuters team waited almost all day behind Syrian Democratic Forces members who were fighting Islamic State in Raqqa to lead us into this building. They had posted themselves there temporarily. They took it after fierce fighting. It was just at very short distance from the Islamic State's position. Whenever a building or a district was taken from the jihadists, the soldiers would exhibit their black flags like spoils of war. That day they found two black flags. I heard them arguing with each other over whether to burn them. Some soldiers refused saying that the words on the flag contained text from the Koran and was thus sacred." REUTERS/Zohra Bensemra/File Photo