Why America Can't Win the War in Afghanistan 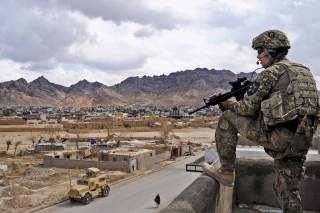 The Washington Post published an opinion piece written by Republican Senators John McCain and Lindsey Graham, which argued that the war in Afghanistan is in a stalemate and the only way to break that stalemate is to give the commanding general more combat troops. If the president follows their advice, then the almost certain outcome will be an increase in U.S. casualties without any strategic impact on the outcome. The war will continue on without end or purpose.

McCain and Graham claim that in recent years the U.S. government has “tied the hands of our military in Afghanistan.” To succeed this time, they said, “requires the right number of people in the right places with the right authorities and the right capabilities.” They also noted that it is “imperative that we see our mission through to success.” The only problem with their observations is that the two senators ignore the fact that this pattern has been repeated countless times since 2007 to no effect.

In February 2007, there were only twenty-six thousand U.S. troops in Afghanistan. Gen. Dan McNeill was in command at that time and decided to “take a harder line with the militants than his predecessor.” In June 2008, McNeill complained that his command was “under resourced” and that the lack of resources had “been a constant theme since I’ve been here.” President George W. Bush increased that troop strength to thirty-three thousand. By September of that year, General McNeill’s replacement, Gen. David D. McKiernan, claimed that there weren’t enough resources to defeat the insurgency. He said an additional twenty thousand troops should do achieve that goal. Newly elected President Obama authorized an additional seventeen thousand troops to support the mission.

In May 2009, however, Secretary of Defense Robert Gates fired General McKiernan because he said “fresh thinking” and “fresh eyes” were needed. Those eyes belonged to Lt. Gen. Stanley McChrystal, whom Gates put in charge. There were approximately sixty thousand U.S. troops in Afghanistan by the time McChrystal had taken command in June 2009, yet by September of that year McChrystal had concluded that things were getting worse.

The situation was so dire, McChrystal wrote, that the “failure to gain the initiative and reverse insurgent momentum in the near-term . . . risks an outcome where defeating the insurgency is no longer possible.” What was needed, he continued, was a new strategy and more resources. The president approved thirty thousand additional troops.

President Obama is routinely blamed for setting artificial deadlines in Afghanistan, calling for the withdrawal of the troops to begin by the summer of 2011. But he did not come to that conclusion on his own. It was agreed to by General Petraeus, Adm. Mike Mullen, Secretary of Defense Robert Gates and General McChrystal.

In case there was any doubt all the senior military leaders of the country—both uniformed and civilian—believed the surge provided enough resources and would work to defeat the insurgency, McChrystal and Petraeus dispelled that in subsequent public statements.

During a House Armed Services Committee hearing in December 2009, former chairman Buck McKeon asked General McChrystal if “the deployment of 30,000 troops to the eastern and southern parts of the country and the 18-month timeline provide the least risk and most opportunity for success” when compared to the other options he had given to the commander-in-chief. In response General McChrystal said:

I believe that nothing in this is without risk—as you have said, with least risk—so I think it is appropriate risk . . . I believe that the resources we have been provided, along with the strategy which we have already started implementing and the resolve reflected by the support of the American people and our other coalition allies, I believe for this 18 months we are going to make tremendous progress against this, while we simultaneously grow Afghanistan's capacity to provide for its own security. That then bridges to the long term. So I am very comfortable where we are now as we go out toward the strategic partnership, and I don't believe the July 2011 time frame militarily is a major factor in my strategy.

In a January 2011 open letter to the troops in Afghanistan, General Petraeus wrote:

“Indeed, together with the establishment of additional organizations and refinements of our strategy, the additional resources enabled us this past fall to get the ‘inputs’ right in Afghanistan for the first time.”

Yet despite the confidence of these two four-star generals, despite the right “inputs” provided by the president, the mission was unsuccessful.

General Petraeus and Admiral Mullen both said they would not return later and said America should stay forever if the surge did not work. That, unfortunately, is exactly what McCain and Graham are now requesting.

Here is the unequivocal bottom line: despite hundreds of billions of dollars spent over the past sixteen years, and the 2,293 killed and 17,674 wounded American troops during that timeframe, Afghanistan is still a violent, unstable country with a hopelessly corrupt government.

Every commander since General McNeill in 2007 has asked for more troops. Presidents Bush and Obama authorized the troop request every time, yet not once after the generals got what they asked for were their tactical or strategic objectives met.

I served in Afghanistan at the height of the 2010 surge and can confirm that even with more than one hundred thousand U.S. troops on the ground, there were still massive swaths of the country that were no-go territory for friendly troops, and the Taliban and other insurgents ran wild.

So long as Pakistan refuses to stop the Taliban from using its territory as a safe haven and the government in Kabul remains as corrupt as it has been, it wouldn’t matter if President Trump sent two hundred thousand troops to Afghanistan. There would never be enough troops and the war would not be won. Until the Afghan government, the people and the Pakistan government decide they’re willing to do whatever it takes to end the war, then the fighting will continue, without resolution, irrespective of what military tactics the United States employs.

The idea that only a few thousand will “break the stalemate” ignores the past decade of tactical failure with ten times that number of troops. It is imperative, therefore, that the United States not pointlessly sacrifice the lives of any more American servicemen and women, nor should it pour any more treasure into a mission that cannot succeed.