Why America Could Invite Taiwan's President to Washington 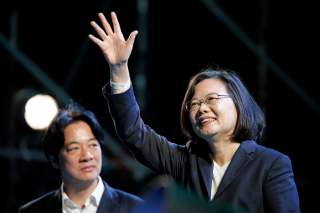 American-Taiwanese relations are in the spotlight again, following the efforts of a group of U.S. lawmakers urging Nancy Pelosi, the speaker of the U.S. House of Representatives, to invite Taiwan’s President Tsai Ing-wen to address a joint session of Congress. In their letter, the lawmakers called President Tsai “a genuine democratic leader engaged in a struggle against an authoritarian and oppressive system that seeks to deny the Taiwanese people democratic rights and fundamental freedoms.” The letter, signed by U.S. Republican senators Ted Cruz, Marco Rubio, Tom Cotton, Cory Gardner and John Cornyn, concluded that an invitation to President Tsai “would send a powerful message that the United States and the American people will always stand with the oppressed, and never the oppressor.” Given the elevated tensions among China, Taiwan and America, is now the time for Speaker Pelosi to invite Tsai to Washington?

The Taiwan Relations Act of 1979

The Taiwan Relations Act was enacted by Congress after U.S. President Jimmy Carter’s decision to cut official diplomatic ties with Taipei and annul the Sino-American Mutual Defense Treaty between the United States of America and the Republic of China (Taiwan). All of this was done in favor of the People’s Republic of China (PRC), after the two governments forced Washington to choose sides. The TRA now stands as a unique domestic law passed by Congress to limit the damage to U.S.-Taiwan relations and to reassure Taipei of continued relations and U.S. military assistance, making it U.S. policy “to maintain the capacity of the United States to resist any resort to force or other forms of coercion that would jeopardize the security, or the social or economic system, of the people on Taiwan.”

The U.S. senators are hoping to mark the fortieth anniversary of the Taiwan Relations Act (TRA) on April 10, knowing full well the visit would draw the ire of Beijing, which may consider Tsai’s address before Congress de facto recognition of Taiwan as a state and a move toward secession. Any move toward secession falls under Article 8 of China’s 2005 Anti-Secession Law, which authorizes the use of “non-peaceful means” as a response.

Beijing considers Taiwan as a lost “sacred territory” of China and has been calling for the “reunification” of the self-governed and democratic state after Chiang Kai-shek’s Kuomintang (KMT) forces fled to the island after being defeated by Mao Zedong’s Communist forces in 1949. On January 2, Chinese president Xi Jinping gave his “Message to Compatriots in Taiwan” speech to mark the fortieth anniversary of formal diplomatic relations with the United States, calling for the peaceful “reunification” of the island and mainland while refusing to rule out the use of force.

Today’s Congress has also been active in their support for Taiwan, passing such legislation as the Asia Reassurance Initiative Act of 2018 at the end of last year, which. That act, although not binding, mandates, “The President should conduct regular transfers of defense articles to Taiwan”—as opposed to the infrequent transfers that have taken place normally. Congress has also introduced legislation to help Taipei retain its remaining diplomatic allies under the Taiwan Allies International Protection and Enhancement Initiative (TAIPEI) Act and to help Taiwan regain observer status in the World Health Organization. And any potential visit by Tsai would also be welcomed under the Taiwan Travel Act, passed by the Congress in March 2018 to help “encourage visits between U.S. and Taiwanese officials at all levels.” U.S. Vice President Mike Pence also expressed support for Taiwan in his “Remarks on the Administration’s Policy Towards China” last October, pronouncing “America will always believe Taiwan’s embrace of democracy shows a better path for all the Chinese people.”

Should Pelosi extend an invitation to President Tsai?

House Speaker Nancy Pelosi is surely aware of the potential risks o Tsai faces should she address the U.S. Congress, as Beijing is unlikely to allow her visit to pass without some sort of face-saving response. Tsai’s less-offensive visit to America in August of last year, to Los Angeles and NASA’s Johnson Space Center in Houston, served as a convenient excuse for Beijing to put more pressure on poaching Taiwan’s few remaining diplomatic allies and conducting more military exercises, including “island encirclement patrols” by China’s bombers, fighter jets and warships. Fortunately, her travels so far have not led to the type of blowback experienced by her predecessor, Lee Teng-hui, after his June 1995 visit to his alma mater Cornell University, which preceded the 1996 Taiwan Strait Crisis ten months later.

Should Tsai go to Washington, her Democratic Progressive Party (DPP), which lost several key elections last November, may get a boost from the more independence-minded Taiwanese, along with her bid for a second term in 2020. But beyond a well-publicized symbolic show of support from the Congress, Tsai may have few substantive rewards for her visit, as U.S. lawmakers appear to be reaching the limits of their legislative support for Taiwan. A group of U.S. scholars issued a report last Tuesday, advising the Trump Administration “symbolic or substantive actions that call into question the U.S. commitment to its historic [One China] policy will aggravate the mainland threat to Taiwan and cause unproductive friction in Washington-Beijing relations without accomplishing any useful purpose.”

Moreover, strong backing for Taiwan from the U.S. president has been in doubt after he asked “even more than [Korea], what do we get from protecting Taiwan?” at a meeting of the National Security Council on January 19, 2018. Strong support from the American public is also in question—though public opinion is fickle, only 35 percent of Americans polled would favor the use of U.S. troops if China invaded Taiwan. Of course, this level of support could change depending on whether China was provoked by a declaration of independence or a mere invitation for Tsai to speak before Congress.

Independence for Taiwan is a related issue, and a spokesperson for the American Institute in Taiwan (AIT), the U.S. de facto embassy in Taiwan, recently stated AIT’s stance toward independence, when she expressed her displeasure over a proposed referendum on Taiwan independence. With U.S.-China trade talks underway and another round of North Korea talks scheduled, Washington appears less eager at this stage to increase tensions with Beijing to the point of war, and more content to maintain the status quo on Taiwan.

Stick to the status quo, but extend a trump card

Congress has displayed strong support for Taiwan through recent legislation, and there is no real harm by extending an invitation to President Tsai to speak in Washington. But as the democratically-elected leader of twenty-three million people, Tsai is beholden to and must carefully weigh the wishes of the majority of Taiwanese, most of whom cling dearly to the status quo of neither political integration with nor de jure independence from China. And Tsai must be mindful not to embrace the fortieth anniversary too closely, lest she alienate those Taiwanese voters who see April 10, 1979, not as a day to celebrate, but rather to lament as the day U.S. President Carter betrayed the island’s people.

While Taiwan’s Ministry of Foreign Affairs (MOFA) has indicated there are no current plans for President Tsai to visit Washington, in the event of a formal invitation from House Speaker Pelosi, Tsai will need to weigh the risks and rewards of accepting an invitation. In lieu of any unlikely concrete assurances of total damage control from Washington, she may be better off expressing her gratitude and politely declining any potential offer to address Congress in April. Nonetheless, the extension of an invitation by speaker Pelosi under the Taiwan Travel Act will serve as a useful reminder to Beijing that Tsai holds a trump card—an open invitation to Washington.

Gary Sands is a senior analyst at Wikistrat, a crowdsourced consultancy, and a Director at Highway West Capital Advisors, a venture capital, project finance and political risk advisory. A former diplomat with the U.S. Overseas Private Investment Corporation, he has contributed a number of op-eds for Forbes, U.S. News and World Report, Newsweek, Washington Times, The Diplomat, Asia Times, National Interest, EurasiaNet, and the South China Morning Post. He is now based in Taipei, Taiwan.