Why America Is Divided Over Donald Trump 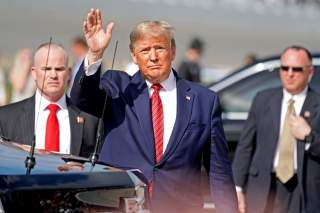 In 2016, Donald Trump won the presidency in an election with 56 percent of eligible voters turning out, approximately 136 million citizens. Much has been made of the fact that Trump won 63 million (43 percent) of those votes, but 73 million (57 percent) of voters preferred other candidates.

In the 2018 midterm elections for the House of Representatives, the turnout was 113 million voters, slightly over 50 percent of those eligible. In the House vote to impeach Trump, representatives favoring impeachment had won 61 million or 54 percent of the votes cast in 2018, while those opposing had won 51 million or 45 percent.

Looking at the Senate's decision not to remove the president, it is also worth noting the electoral base on which the senators reside. The current senators’ most recent elections were the ballots of 2014, 2016 and 2018, together with four special elections in 2017 and 2018. Collectively in those elections, the Republican majority in the Senate attracted a total of about 57million votes while the Democratic minority received slightly under 69 million. In terms of total constituents senators favoring Trump’s conviction represent some 173 million citizens, those opposing some 158 million.

A minority elected Trump. A minority defended him in the House. A minority of voters supported the senators protecting him against witnesses and additional evidence.

Everyone who cares about the American community should ponder these numbers. They reflect the deliberate constitutional design that protects the minority by weighing their votes more heavily than those of the majority: by allowing less populous states to have two senators and by incorporating that design in the electoral college, the voting power of citizens in those states is enhanced. With the enfranchisement of former slaves and later of women, this remains the central constitutional deviation from the democratic norm.

A different but related distortion arises in the many legislative districts that are gerrymandered for partisan advantage at both the state and federal levels. In the same ruling that refused to referee gerrymandering disputes, Chief Justice John Roberts made clear that the practice is incompatible with the nation’s core democratic values.

The long-standing grievances of the minority who elected Trump are being counterbalanced by mounting frustration on the part of the majority who chose other candidates. That frustration feeds the increased demand for direct popular election of the president. Profound challenges to the constitutional order are now upon us. The founders’ acute wariness of unrestrained majoritarianism persuaded them to adopt exceptional safeguards against it. Yet it is doubtful that a system pitting minority power against majority rights is sustainable.

In this context the results of the impeachment process require explication. Views expressed by key senators make clear that their moral verdict differed starkly from the political decision. Sen. Lisa Murkowski (R-AK) displayed obvious anguish that the process had made a fair trial impossible. In the opinion of Senator Ben Sasse (R-NE), his colleague, Sen. Lamar Alexander (R-TN), spoke for many Republican members—“lots of us”—when he concluded that the House had proved Trump’s inappropriate behavior on Ukraine but that the mandatory punishment of removal from office was too heavy a responsibility for the Senate to bear. If that assessment is accurate, then most senators probably agree that Trump is guilty as charged. Yet the outcome is effectively an abortion, neither a true acquittal nor a Scot’s verdict of “not proven.”

Many senatorial consciences must be troubled by the tug of war between the narrow politics of accommodating the Trump base and the evident sentiment of most Americans that, at a minimum, the president’s conduct deserves rebuke. Like most elected officials, senators generally pledge faithful service not just to voters who supported them but to all their constituents. Though often honored in the breach, that commitment demands understanding and, where possible, compromise with the views and interests of those who supported other candidates. That obligation grows more profound when a person gains office without earning a majority of votes. If a winning majority owes respect to a losing minority, then democratic logic says that a winning minority owes even greater sensitivity to a losing majority.

For a healthy and durable balance of interest to prevail, Americans in both the minority and the majority camps need to consider carefully the concerns of their political opponents. The minority hardly conceives of itself as privileged—and in many respects, economically and otherwise, some members are not. It is, however, clearly privileged in voting power. On the other hand, the majority may be less aware of the economic and other advantages it enjoys, but it is becoming more alert to the discount imposed on its vote. Those disparate perceptions are a recipe for prolonged conflict.

No single formula will dissipate these tensions. Divergent interests and situations will always persist. A pluralistic society requires citizens to develop a kind of situational awareness, not sacrificing their own interests but balancing them against the comparably valid interests of their neighbors. If this observation seems mushy and unsatisfying, it’s because it is. Hard-edged prescriptions may do more harm than good, inviting vinegar where balm is needed. Evangelical or not, we could do worse than to heed Proverbs 15:1 “A soft answer turneth away wrath, but a harsh word stirs up anger.”

In the coming presidential and congressional elections, those who oppose Trump should grant his supporters the presumption that they are patriots acting in good faith. The Trump minority owes no less to those who find Trump a man of defective character and dangerous impulse. That mutual obligation is the first imperative for a civil, sturdy American polity.

Alton Frye is a fellow of the National Academy of Public Administration.