Why America Must Own the 9/11 Terror Attacks 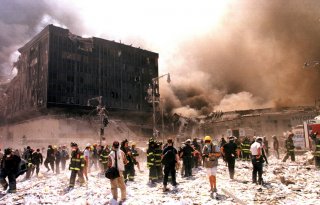 For the next five years, until the terrorist attacks on September 11, 2001, a series of bombings occurred, targeting mostly Western expatriate workers living in Saudi Arabia. In 2001, the Saudi intelligence chief, Prince Turki bin Faisal, also traveled to Afghanistan to persuade the Taliban leadership to hand over bin Laden. Despite the failure to secure bin Laden, the Saudi government was engaged in a proactive campaign to decimate Al Qaeda on the eve of 9/11. In the aftermath of this tragedy, hell broke loose.

In 2003, Al Qaeda launched a massive terrorist campaign in Riyadh, targeting critical infrastructure, international businesses, foreign residents, Saudi authorities, and the U.S. government. It began with a series of attacks on housing complexes in the Saudi capital in 2003. Until 2006, hundreds were killed and thousands injured. In 2009, Al Qaeda in the Arabian Peninsula (AQAP) came into being to wage more deadly attacks. Four times, it tried to assassinate then-Crown Prince and anti-terrorism chief Muhammad bin Nayef, forcing the U.S. government to declare AQAP as the world’s most dangerous Al Qaeda affiliate.

For its part, Saudi Arabia also created one of the largest and most efficient counterterrorism programs in the world, both in its own right and in collaboration with the United States and its other strategic allies. These efforts bore fruit in 2010 when the Saudi-backed infiltration scheme thwarted AQAP’s attempt to place bombs on two cargo planes in Yemen that had been destined for the United States. This helped save thousands of American lives.

The subsequent U.S.-Saudi counterterrorism partnership has led to the killing of AQAP leader Qassim al-Rimi last year and his predecessor Nasir al-Wuhayshi in 2015. They died in U.S. drone strikes in Yemen. This partnership has also helped decimate ISIS in Syria and Iraq, including killing its leader, Abu Bakr al-Baghdadi, in a U.S. drone attack in 2019.

Al Qaeda and ISIS pose a “mortal danger to Saudi Arabia”— the phrase used in the 9/11 Commission Report—as they both aspire to revive the Islamic caliphate. Since Saudi Arabia is the cradle of Islam and its leadership the custodian of the Two Holy Mosques in Mecca and Medina, the road to this caliphate lies through the kingdom and its monarchy. As Saudi Arabia faces an existential threat from Al Qaeda and ISIS, it should be the last country to collaborate with the terrorists. What can be expected is that it will do whatever it can “to protect the Islamic nation from the evils of all terrorist groups and organizations,” as the founding goal of the forty-one Muslim nations Islamic Military Alliance against Terrorism forged by Riyadh in 2016 states.

The above narration sufficiently exposes the absurdity of claims about Saudi links with 9/11 terrorists. If two of the Saudi hijackers were meeting with a couple of U.S. residents of Saudi origin in Los Angeles, then was it not the responsibility of the U.S. security agencies to keep a tag and take preventive measures? Where does the Saudi government come in here? It cannot be made a scapegoat for the worst intelligence failure in U.S. history.

Let it also be clear that terrorism has no religion, as the deviants of all faiths, Muslims, Christians, and others, have committed terrorism and killed innocent civilians. Timothy McVeigh’s decision to bomb a building in Oklahoma City in 1995 is a classic example. Yet, for twenty years, Islamophobia has shaped Western attitudes and policies. Saudi Arabia, for being the center of gravity for the world of Islam, has been given special treatment. The U.S. declassification spree has done nothing except damaging its time-tested relations with Saudi Arabia.

Hence, there is an urgent need for the Biden administration to make a course correction and exhibit responsible behavior. Saudi Arabia and the United States have both faced deadly acts of terrorism by Al Qaeda and ISIS. Together, they have rendered mortal blows to these terrorist outfits. Such facts alone should put an end to baseless insinuations about Saudi complicity in the terrorist attacks of 9/11. The historic bond between the two nations is too precious to fail. Hence, it is time to heal old wounds, move on and rebuild the strategic partnership.

Ali Asseri served as ambassador of the Kingdom of Saudi Arabia in Pakistan (2001-09) and Lebanon (2009-16) and is a Board member at RASANAH - the International Institute for Iranian Studies in  Riyadh. He holds a Ph.D. in Economics from Beirut Arab University and has authored a book titled Combating Terrorism: Saudi Arabia’s Role in the War on Terror, which received a letter of appreciation from President Barrack Obama.