Why America Must Stand Up for Hong Kong's Democracy Movement 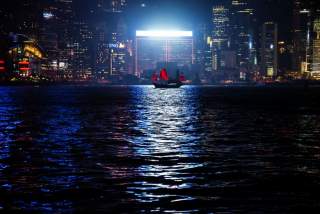 Loath to become the world’s policeman, the Obama administration has turned instead into its fireman. Hither and thither, the administration runs to different corners of the world trying to put out fires—today Central America, tomorrow Jerusalem, next week Syria. Such an approach may rack up air miles for the Secretary of State, but clearly, it’s no substitute for a preventive blueprint that safeguards our national interest.

As it happens, one part of the world experiencing a mini–flare up—Hong Kong—affords us an opportunity to pursue a long-term strategy pertaining to a much larger actor: China. Our foreign-policy challenges would ease considerably if China became a normal, status-quo country with elections, free markets and checks and balances that its leaders could use to manage internal tensions.

Allowing the 7.1 million people of Hong Kong to practice real democracy would let the authorities in Beijing see up close that there’s nothing to fear from a sovereign people. Over time, familiarity with democratic practices in this one Chinese city would help China’s leaders acquire for themselves the frame of mind needed to begin to introduce universal suffrage on the mainland itself.

This is what we see with economic development. China’s experiment with capitalism and free markets since the death of Mao in 1979 has been vastly helped by the fact that its businessmen are able to learn best business practices from Hong Kong, much to the benefit of 1.3 billion Chinese on the mainland. Political culture, like business culture, can be learned through observation and close proximity.

Unfortunately, China has shown itself in no mood to countenance the legitimate demands of the people of Hong Kong to be allowed to practice democracy in electing their Chief Executive and their miniparliament, the Legislative Council. Its response to a referendum last month, which called for universal suffrage, was to denounce it as illegal, even as some 800,000 of the city’s registered voters voted for democracy. And when half a million marched on July 1 to demand democracy, China had 500 of them and five of the protest’s leaders arrested. Most ludicrously, the leaders were clapped into prison for “walking too slowly.”

This makes a mockery of the pillars of Hong Kong’s success story: the rule of law and due process. As with China’s ham-fisted attempts to silence independent media outlets over the past few years, China is now putting at risk not just its own political evolution but Hong Kong’s economic success.

The Success of a Barren Rock

Journalists often write that Britain “returned” sovereignty of Hong Kong to China in 1997 after 151 years of colonial rule. In fact, that misstates the history. There was no “there, there” in Hong Kong when Britain grabbed the area at the mouth of the Pearl River in the Opium War of 1839-42. The city that eventually was built around this deep natural harbor became an economic miracle, the fortuitous combination of three factors: British rule of law and sense of fair play, the industry of the Chinese who populated the area and the craftiness of colonial administrators sent by London who remained steadfastly free-market, even when Britain turned socialist after World War II.

The Index of Economic Freedom published each year by The Heritage Foundation and The Wall Street Journal has always identified Hong Kong the world’s freest economy. Anyone who has visited this capitalist theme park would know why. The city levies almost no trade tariffs, is completely open to international trade and has a small, efficient government, a professional, honest civil service and a light regulatory touch. It is easy to see why Hong Kong’s GDP per capita of $36,796 is one of the highest in the world and four times higher than the GDP per capita of the country to which the city has belonged since 1997—China. The border between Hong Kong and communist China served for many years as a stark reminder of the laws of economics: on one side lay impoverished, oppressed China and on the other, enlightened, prosperous Hong Kong.

On July 1, 1997, London handed sovereignty of the territory to China. Britain could hold on to Hong Kong no longer, because while China had ceded the island in perpetuity in the nineteenth century, the adjacent Kowloon peninsula had only been leased for ninety-nine years on 1898, and Hong Kong could not be split. The Chinese leader who took over China in 1979, Deng Xiaoping, clearly was cut from a different cloth from the man he replaced, Mao Zedong, as he wasted little time introducing some free-market reforms. Deng was able to convince Margaret Thatcher, the then-prime minister of the UK, to turn over Hong Kong in 1997, promising that he would implement a “One Country, Two Systems” policy.

In essence, this meant that while China’s 1.3 billion people would continue to have their most basic freedoms restricted under rule by the Chinese Communist Party, Beijing pledged that Hong Kong would continue to enjoy most of the same rights as the world’s liberal democracies. Specifically, in the Joint Declaration signed by both China and the UK, a binding international treaty filed at the United Nations, Beijing promised that,

Rights and freedoms, including those of the person, of speech, of the press, of assembly, of association, of travel, of movement, of correspondence, of strike, of choice of occupation, of academic research and of religious belief will be ensured by law in the Hong Kong Special Administrative Region. Private property, ownership of enterprises, legitimate right of inheritance and foreign investment will be protected by law.

Moreover, China also promised that from 2017 on, Hong Kongers may elect their Chief Executive and all members of the Legislative Council. China may be going back on these promises now by allowing Hong Kongers to vote for their leaders, but only for the handful of those picked by Beijing.

China is backsliding on more than its electoral promises. Its attempts to quash the last fully independent media outlets in Hong Kong, those owned by publisher Jimmy Lai, a critic of the Communist Party, render pledges to respect freedom of speech, press or private property meaningless.

America has a strong national-security interest in making sure that Hong Kong remains the free port that it is. According to the State Department, trade with Hong Kong produced the largest of any U.S. trade surpluses in 2012, owing largely to high-tech products. Some 1,400 U.S. firms have offices in Hong Kong; close to 900 of them are regional headquarters or offices. And even after the handover, Hong Kong remains a mecca for entrepreneurial Americans: some 60,000 American expats call Hong Kong home.

It should hardly surprise that early on, Congress established what U.S. policy toward Hong Kong would be by passing the U.S.-Hong Kong Policy Act in 1992. It said,

Support for democratization is a fundamental principle of United States foreign policy. As such, it naturally applies to United States policy toward Hong Kong. This will remain equally true after June 30, 1997.

The human rights of the people of Hong Kong are of great importance to the United States and are directly relevant to U.S. interests in Hong Kong. A fully successful transition in the exercise of sovereignty over Hong Kong must safeguard human rights in and of themselves. Human rights also serve as a basis for Hong Kong's continued economic prosperity.

The Obama administration, alas, seems to want to run away from all this. Asked last week what the State Department thought of China’s recent handling of Hong Kong, spokesman Marie Harf’s response left much to be desired. Here’s the exchange she had with a reporter:

QUESTION: Should Beijing be listening to what’s happening in Hong Kong? Should they be taking note of these cries for greater democracy?

QUESTION: You think they are?

MS. HARF: Not for me whether to say if they should or not.

Ms. Harf did profess support for democracy in Hong Kong, but seemed to absolve Beijing of any responsibility for living up to its promises under “one country, two systems.”  Moreover, her whole demeanor seemed to be one of disengagement. When first asked if she had heard about the protests, she answered in an offhand way, “Yeah. And this happens, I think, every year on July 1st, yeah.” Leaving aside the fact that we must wonder why thousands of Hong Kongers protest the anniversary of their “return to the motherland,” this year’s was the largest since the handover itself, and led to the largest wave of arrests.

It is understandable that an administration beset by so many crises would want to dodge yet another, but that is precisely the point. The United States has a long-term interest in seeing Hong Kong play the same role that, say, Greece played with Rome. Its larger master may have vanquished Greece militarily, but Greece culturally colonized the colossus.

U.S. national interests will prosper when China is on a path toward a political culture where disagreements can be worked out peacefully, both domestically and internationally. Given the situation in Hong Kong, Mr. Obama should take a leaf from the playbook of his former chief of staff Rahm Emanuel and not let this “crisis to go waste.” Siding with the pro-democracy demonstrators in Hong Kong would not just be in keeping with our best traditions, it would also pave the way to a better relationship with China down the road.