Why America Needs Boots on the Ground in Iraq 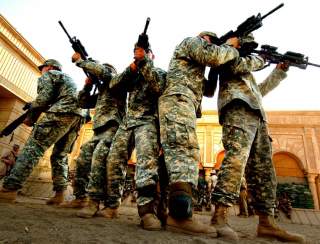 Although Chairman of the Joint Chiefs of Staff Martin Dempsey recently downplayed the importance of Ramadi, the loss of the capital of al-Anbar province casts doubt on the effectiveness of the U.S.-led coalition strategy to “degrade, and ultimately destroy” the Islamic State of Iraq and Syria (ISIS). Iraqi lawmaker Dhiaa al-Assadi called the fall of Ramadi “a major catastrophe.” Domestically, former Army Vice Chief of Staff General Jack Keane, one of the architects of the 2006 surge in Iraq, lamented that “we are in fact losing this war,” while House Speaker John Boehner argues that "the president's plan isn't working. It's time for him to come up with overarching strategy to defeat the ongoing terrorist threat." Even Iran’s Quds Force commander Major General Qassem Soleimani accused Obama of having “not done a damn thing so far to confront [ISIS].” The impact of the loss of Ramadi was magnified by the recent recapture of Tikrit by Iraqi security forces (ISF) that was touted as a major victory and a potential turning point in the war against ISIS.

Such dire statements stand in sharp contrast to President Obama’s assessment that the loss of Ramadi constitutes a “tactical setback” and the overall strategy is succeeding. While U.S. officials are still trying to determine exactly what happened in Ramadi, it appears that the ISF retreated in the face of a complex and determined ISIS offensive to seize the city. Despite having superior numbers, Secretary of Defense Ash Carter said that “the Iraqi forces just showed no will to fight” and their withdrawal allowed a large number of U.S.-supplied tanks, personnel carriers and other military equipment to fall into the terror group’s possession. Additionally, the resultant exodus of thousands of displaced Iraqi Sunnis seeking to escape the violence in nearby Baghdad led to reports of sectarian harassment and violence.

While the significance of Ramadi is debatable, it is clear that despite nine months of U.S. and coalition airstrikes, ISIS remains a resilient and credible fighting force that has made significant territorial gains in Iraq and, after the recent seizure of Palmyra, controls approximately half of Syria. Such disconcerting results have exposed the limitations of air power and the requirement to reassess the strategy. Simply put, it is unrealistic to expect the coalition to defeat, let alone destroy, ISIS because the current strategy is inadequately resourced for this outcome.

How can this discrepancy be resolved? The coalition could change the ends of its strategy to a less ambitious goal of degrading and containing ISIS, but this seems unlikely, as it would send a message of weakness or lack of commitment to Iraq’s security. Another alternative is to increase the resources allocated to the strategy (means) and/or change how they are applied (ways). Options include increasing the number of coalition military forces in Iraq to work more closely with ISF and build their capacity to combat ISIS, or maintaining a small military footprint while outsourcing the fight to the Iranian-backed Shiite militias (collectively referred to as the Hashd al-Shaabi, or Popular Mobilization Units).

Despite the threat that ISIS poses to the United States and its regional and international partners, Obama remains opposed to significantly increasing the number of U.S. troops in Iraq. This is unsurprising when one considers that he campaigned on ending the “dumb war” in Iraq and recently told the Atlantic’s Jeffrey Goldberg that “if [Iraqis] are not willing to fight for the security of their country, we cannot do that for them.” However, Obama’s intransigence misses the opportunity to view the loss of Ramadi as a wake-up call and deploy additional U.S. military forces in order to expand the existing training program and embed with ISF units to build trust and confidence as they transition from a largely “checkpoint army” to a combat-ready force against ISIS. While it is certainly true that the United States cannot provide the Iraqis the will to fight, Max Boot argues that “[e]xperience shows that ‘combat advisors’ fighting alongside indigenous troops are far more effective than trainers confined to large bases.” Additional special operations forces would facilitate more direct combat operations such as the recent Delta Force raid that killed ISIS leader Abu Sayyaf in Syria. Obama also should heed former secretary of defense Robert Gates’ recommendations to establish more permissive rules of engagement while increasing the number of joint terminal attack controllers (JTACs) and forward deploying them with the ISF to direct coalition combat aircraft against ISIS. Senator John McCain recently noted that some 75 percent of coalition airstrikes have not released ordnance “because we don’t have somebody on the ground who can identify a . . . moving target.”

How many additional U.S. troops are required in Iraq? Former supreme allied commander retired admiral James Stavridis has advocated increasing the number of U.S. troops to 10,000, while military analyst Fred Kagan has argued for 20,000 personnel. While the numbers vary, these estimates suggest that a larger military footprint in Iraq is needed to successfully implement the current strategy. During the course of his presidency, Obama has listened to, and acted on, the Pentagon’s recommendations regarding increasing or extending the number of troops deployed to Afghanistan and Iraq when required by the security situation and the strategy. For example, he directed the “surge” of 30,000 troops in Afghanistan in 2009. Obama also increased the number of military personnel serving in Iraq from 1,500 to 3,000 in November 2014. Finally, he authorized the 9,800 troops currently deployed to Afghanistan to remain throughout 2015, with all U.S. forces scheduled to depart by the end of 2016. While the decision to increase U.S. military forces in Iraq risks further mission creep, it is a far cry from the 160,000 U.S. troops serving in Iraq during the height of the surge in 2007 and the Obama administration would undoubtedly establish strict controls to prevent further expansion of the combat mission.

To be sure, a more direct combat role for U.S. military forces alone will not solve this security challenge that is largely political in nature. The United States should demand that Iraq’s prime minister, Haider al-Abadi, deliver on his promise to implement necessary reforms to create a more inclusive “national unity government” that is responsive to the concerns of the minority Sunni and Kurdish populations. Additionally, the loss of Ramadi should motivate the Iraqi government to overcome sectarian concerns and finally get serious about recruiting, training and equipping Sunni national guard forces to combat ISIS in Anbar province. Abadi’s efforts to date have been half-hearted and ineffectual, leading Kenneth Pollack to conclude that the program “would be a joke were it not so lethally frustrating to the Sunnis themselves.” The Pentagon reportedly plans to provide military equipment to Sunni tribal fighters, but a more robust training program is required. These forces, properly resourced and trained, could play a critical role similar to the so-called “Sons of Iraq” during the Sunni Awakening in the fight against Al Qaeda. Continued delay will only make the task of defeating ISIS in Iraq more difficult and costly.

The Obama administration’s position regarding cooperation with the Iranian-supported Shiite militias has evolved in recent months. In March, CENTCOM Commander General Lloyd Austin appeared before the Senate Armed Services Committee and testified that “I will not, and I hope we never, coordinate or cooperate with Shiite militias.” While this worked in Tikrit, some Iraqis blame the United States for the loss of Ramadi because the Obama administration pressured Abadi to keep out the militias that could have fought and defeated ISIS. The Anbar provincial council has subsequently called for support from the Hashd al-Shaabi to assist them in the fight against ISIS, and Pentagon spokesman Colonel Steve Warren acknowledged that “[t]he militias have a part to play in this. As long as they are controlled by the central Iraqi government, then they will participate.” If this evolution continues, perhaps Washington Post columnist Eugene Robinson’s musing that we might one day see an Iranian general (the aforementioned Qassem Soleimani comes to mind) calling in U.S. airstrikes for support would not be as far-fetched as it once seemed.

Although the Shiite militias have acquitted themselves better than the ISF in combatting ISIS, their expanded role risks increasing the sectarian divide in Iraq and promoting the perception that the United States is losing influence within the region. While Abadi has vowed to recapture Ramadi “within days” and has authorized Hashd al-Shaabi to spearhead the campaign, former U.S. Ambassador to Iraq Ryan Crocker believes that Iran-backed militias “invading Sunni territory” is potentially worse than ISIS because it threatens to destroy Iraq as a unitary state. Even the name of the operation (Labaik ya Hussein, in honor of a revered Shiite imam) seems an unforced error that influential Shiite cleric Moqtada Sadr has criticized for fueling the perception that this is a sectarian war.

White House Press Secretary Josh Earnest’s announcement that “the United States is not going to be responsible for securing the security situation inside of Iraq” reinforces the view among many Iraqis that Iran is a more committed security partner. Iraqi Member of Parliament and advisor to former prime minister Nouri al-Maliki Sami al-Askari argues that “[t]he American approach is to leave Iraq to the Iraqis. The Iranians don’t say leave Iraq to the Iraqis. They say leave Iraq to us.” Tehran has invested heavily in training the Shiite militias to defeat ISIS in Iraq, a goal that it shares in common with the United States. That said, coalition air support for the Hashd al-Shaabi in Ramadi (even under the government’s control) would create the perception that the United States is acting as “Iran’s air force” and serve as another sign of its shrinking influence. The loss of U.S. clout in Iraq is likely to further alienate the Arab Gulf states that are already suspicious about the pending nuclear deal and Iran’s regional ambitions. More broadly, Iran’s increased influence risks upsetting the balance of power in the Middle East, where key U.S. economic and security interests are at stake.