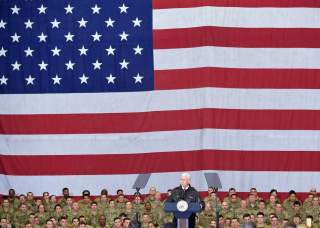 Thousands of U.S. soldiers have been killed in action, thousands more have been wounded, more than $5.6 trillion dollars in expenses have been generated, and America has an overburdened military posture stretched thin to the point of being dubbed “the greatest gift” that China could wish for. These are just a few of the self-evident costs borne by America’s exceedingly active policies pursued in the greater Middle East since the end of the Cold War. Clearly, given the level of attention the region has received over the past quarter century, the day-to-day geopolitics of the Gulf must profoundly impact U.S. interests and security, right? Or, to the contrary, and as Justin Logan argues, does the Middle East just not matter that much to Washington?

Since consolidating hegemony over the Western Hemisphere around the turn of the 1900s, the United States has had a vital interest in preventing the rise of a peer competitor elsewhere that threatens American primacy within its sphere of influence. Washington retains such an interest and should go to great lengths to maintain this status quo. However, in the Gulf, there is no potential peer competitor to the United States. Nothing even remotely close to it. Still, a common argument in favor of preventing the rise of a regional hegemon in the Gulf revolves around its significant energy reserves. A Gulf hegemon in control of the vast hydrocarbon resources of the Gulf, as the argument goes, would retain the ability to exert outsized influence on global-energy markets and potentially harm global prosperity by curtailing oil exports. This makes it necessary to assume the expensive burden of being the Gulf’s outside security guarantor, they posit.

This claim deserves scrutiny, particularly given the fact that it has actually fostered less dissention than U.S. security commitments to Europe and Asia have. First and foremost, it should be made clear that this interest concerns prosperity and not security, whereas in the Cold War both were at stake in this realm. Today, perversely, it is China, America’s only potential peer competitor that would shoulder a disproportionate burden from a hypothetical Persian Gulf supply rut. Concerning the prosperity argument, even if a single entity exerts hegemonic control over the Gulf’s oil, why would the Gulf completely disregard market incentives by curtailing supply for extended periods, even as prices shift in its favor, and not maximize profits? Moreover, the claim that regional instability thanks to interstate war could lead to massive supply cuts is questionable. How, then, was there an oil glut during the height of the brutal Iran-Iraq War? Even in the highly unlikely scenario of a massive Persian Gulf supply shock wrought on by an extreme event, such as the complete closure of the Strait of Hormuz for months on end, the economic impacts would be substantially cushioned by domestic and international oil reserves.

Furthermore, the United States’ astonishingly rapid rise to the top of global-energy producer charts further softens the potentially threatening nature of Gulf supply cuts. After the benchmark price of a barrel of crude plummeted to as low as $30 per day in 2016, OPEC and Russia struck an agreement to curtail supply in order to bolster prices, leading to a roughly $25 rise in price per barrel. In response, and largely thanks to the unique ability of U.S. producers to respond to price swings, U.S. production increases are not only counteracting the supply cut, but are projected to nearly make up for it by the end of this year. OPEC includes all of the countries in the Gulf with significant hydrocarbon reserves, and OPEC’s diminishing power is illuminated by the fact that perhaps the most significant outcome of its production cut was increasing the market share of U.S. producers. Given America’s already modest and continually dwindling reliance on Persian Gulf oil exports and Washington’s relative insulation from the adverse impacts of supply disruption price spikes, the onus of proof is on Gulf hegemon pessimists to delineate how this exceedingly unlikely worst case outcome is a vital U.S. interest to thwart.

While such a theoretical debate would be interesting, its pertinence is diminished because of the balance of power within the Gulf, even without the inclusion of Washington’s robust conventional capabilities. This is where those with the proclivity to inflate threats falsely proclaim that Iran is a menacing regional beast that is primed to conquer the Arabian Peninsula or, at the very least, interfere with freedom of navigation in the Strait of Hormuz despite having shown little inclination to do so. Such a proclamation completely disregards the fact that the nations comprising the Gulf Cooperation Council (GCC) drastically outspend Iran militarily. The calculus further shifts against Iran when one also factors in other regional states that are aligned against Tehran, such as Israel and Egypt. Israel, increasingly aligned with the Gulf States thanks to the purported Iran threat, is the only country in the region to possess a nuclear deterrent.

Saudi Arabia alone spends well over five times as much on defense as the Islamic Republic, while the United Arab Emirates nearly doubles Tehran’s expenditures by itself. Indeed, even prior to the implementation of crippling multilateral sanctions, Iran only boasted an unimpressive 9 percent of the region’s military outlays. Qualitatively, the military edge shared by the Gulf States over Iran is pronounced. While Iran is often forced to rely on Shah-era weaponry procured before the 1979 revolution, the Saudis and friends deploy highly advanced Western hardware, such as F-16s, Abrams battle tanks, Predator drones, and Patriot (and in the near future THAAD and Russian S-400) missile defense systems. As Justin Logan explains, the Gulf States possess what amounts to a half-century qualitative technological advantage over Iran. The scope of the anti-Iran coalition’s qualitative edge is almost laughable when one factors in Israel’s forces.

But what about Iran’s ballistic-missile program that Washington’s Iran hawks constantly express alarm over? Conveniently, they leave out the fact that Iran is held at risk by the missile arsenals of the likes of Israel and Saudi Arabia, the former, of course, being capable of delivering nuclear payloads. This mutual missile vulnerability and its conventional weaknesses have led Tehran to create a military posture assessed by the Pentagon as being defensive in nature; quite the opposite of the expansionist beast that Iran hawks describe. Indeed, the antipathy towards Iran displayed by the hawks seems to be less about hard-headed calculations concerning the Gulf’s strategic balance and more about their outright refusal to accept that Iran has legitimate security interests of its own.

Luckily, the strategic balance in the Gulf lends itself to mutual deterrence, as both sides are too weak to meaningfully project power at the other’s existential expense (nonetheless rule over a population that is overwhelmingly the opposite sect of Islam), which renders offense prohibitively costly. If it is determined that it is still in the United States’ vital interest to prevent the rise of a Gulf hegemon, then the United States would be wise to move offshore and adopt an over-the-horizon posture and allow local actors to uphold the balance of power themselves. Doing so would save Washington considerable treasure and free up strategic attention that can be focused elsewhere in more pertinent strategic theatres (such as actually pivoting to Asia). In the exceedingly unlikely instance that the Gulf’s power balance breaks down, the United States can quickly project power from its carrier strike groups and long-range strategic bombers, move onshore to help restore the status quo, and leave. It is also worth noting that America’s onshore presence (in liberal democratic stalwarts like Qatar and Bahrain) inflames anti-American sentiment, exacerbating the threat posed by terrorists (more on that below).

The elephant in the room when discussing supposed U.S. interests warranting kinetic action in the Middle East, of course, is terrorism. As scholars such as John Mueller have aptly documented, the United States spends a wildly disproportionate amount of money combatting Salafi-jihadist terrorism given the negligible threat that it poses to American lives and interests. Since 1970, the odds of an American being killed in a terrorist attack is one in four million per year, an exceedingly low risk by any reasonable risk assessment barometer. Since 9/11, a horrifying attack that is nonetheless an extreme statistical outlier in terms of death and destruction, the odds of an American being killed in a terrorist attack drop to an astronomical one in fifty million per year. Indeed, the six Americans per year since 9/11 that have perished in terrorist attacks were significantly more statistically likely to be killed in freak accidents such as lightning strikes or by drowning in their bathtubs. Notwithstanding these empirical realities, the United States spends roughly $100 billion per year (along with the cost in human life and diverted geostrategic attention) combatting the miniscule threat posed by jihadists as part of its global war on terrorism. If one assumes that $14 million per life saved is an acceptable cost burden to regulators (this number is significantly higher than the $1 million per life saved that regulators tend to follow), there would have to be six thousand to seven thousand American lives saved per year from jihadists in order for this expenditure to be cost effective.