Why America Prefers a Weak and Peaceful Europe 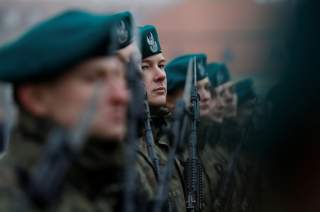 The United States has a very large military—its budget is nearly four times greater than China’s (although China is four times as populous and maintains nearly twice as many active personnel). The U.S. military budget is nearly two and a half times greater than those of all of Europe’s North Atlantic Treaty Organization countries combined. Washington’s defense budget is greater than the combined defense budgets of China, Saudi Arabia, Russia, the United Kingdom, India, France and Japan. Furthermore, many of the soldiers in this enormous military are stationed outside of the American homeland.

The U.S. military maintains over eight-hundred bases in foreign countries—the largest number of any country in the world. Some were inherited from prior holdings of European empires such as Spain and Britain. Others were gained over the course of wars the United States fought. Some others were attained via negotiation with a host government as part of an alliance or in exchange for American security guarantees.

This global military presence is normally explained with the following narrative: peaceful democracies around the globe—not inclined to threaten each other—have given up solving their problems through violence. They no longer wish to build and maintain fearsome militaries. Instead, America benevolently provides them a security umbrella within which they thrive, and which, in turn, ensures the stability of the global economy and world order.

An example of this can be seen in Europe’s relatively peaceful history since 1945. The common refrain is that European culture, once exceptionally warlike and combative, changed due to the Second World War. Reeling from the death and destruction of World War II, former imperial powers supported the establishment of new institutions, such as the European Union and NATO, in order to prevent another war from breaking out on the continent. The last seventy-five years of European peace—for the most part—is thus explained by this memory of mid-century devastation and the advent of new political institutions.

If this explanation were true, then why is the United States subsidizing European security? As U.S. President Donald Trump has famously said of America’s NATO allies: “They are not paying their fair share.” And Trump’s point, whatever his own reasoning, would follow logically from the common narrative. Meanwhile, many on the Left insist that the military budget be reduced to allow for more spending on domestic concerns. While many on both the Right and the Left object to an increase in U.S. military presence and spending, the fundamental narrative remains, and its assumptions often go unchallenged.

But unquestionably accepting this common narrative is to misread the history of postwar European peace. It is also to misunderstand the geopolitical dynamics that either push in the direction of war or make peaceful coexistence more likely. Instead of being the product of new institutions, or the result of a collective memory of war, European peace has a simpler explanation: effective disarmament and subordination to the American sphere of influence.

This is not simply a quid pro quo financial dynamic, in which German military spending or build-up (as might well become the case) could substitute for the security and stability that American spending and presence has provided. It is no coincidence that one-third of U.S. military personnel deployed between 1950 and 2000 were sent to Germany, which alone hosted more than ten million Americans during this time period. If elites and the public want to comprehend why Europe has been so peaceful for the past seven decades, they must start by understanding how disarmament and the American sphere of influence contributed to this peace.

European states are now largely incapable of taking unilateral military action—against each other or anyone else. Not only that, but America acts in Europe as security guarantor of last—and, potentially, nuclear—resort. NATO has pushed member states (minus America) to specialize their militaries. The United Kingdom and France have even discussed sharing their aircraft carriers. The stated reasons, namely, budget constraints and “interoperability,” do not fully explain the need to specialize a military. Limited budgets only call for a country to specialize its military when the goal is to reduce capabilities that are duplicated between it and an ally. A specialized military is a force without all the features necessary for independent military action—or indeed military independence. The effect of NATO pushing its members to specialize is that they become more dependent not only on each other but also, ultimately, on the United States.

Since the end of World War II, the United States has blocked independent military action by allies. During the 1956 Suez Crisis, the government of Egypt nationalized the Suez Canal. In response, Britain, France and Israel invaded the country. Rather than backing its allies, the United States joined its rival—the Soviet Union—in putting diplomatic and financial pressure on the interlopers until they withdrew. When this succeeded, the three countries were humiliated, the UK in particular. The Suez Crisis can be regarded as the final nail in the coffin of the British Empire—it showed that even if Britain had independent military capability, it would not be able to deploy it against American wishes.

In France, we find an example of a country that tried to buck this trend, succeeded for a time, but ultimately found its way back into Uncle Sam’s warm embrace. French president Charles de Gaulle was a talented and headstrong statesman, and he wanted to maintain France’s status as an independent world power against rising American and Soviet influence. After twelve years of retirement, he returned to politics in 1958, shortly after the Suez Crisis demonstrated Britain was subordinate to America. He undertook a number of efforts to buttress and expand France’s own sphere of influence, including a withdrawal from NATO. In 1967, de Gaulle kicked the U.S. military out of some twelve air bases in France. Although Le Général’s efforts failed in the long run—France fully rejoined NATO in 2009—the country still maintains an effective ability to intervene unilaterally in West Africa, a fragment of its former colonial empire. To this day, France is the only major country in Western Europe without an American military base.

The case of Russian geopolitics also abrades the common narrative of European peace. Although Russia had a very different political history following World War II than most European countries, it suffered immense devastation in that “Great Patriotic War” —unmatched in terms of absolute casualties, comparable in relative terms only to Poland and possibly Germany. Yet the memory of this devastation fuels nationalist militarism rather than a sense of “never again,” or the desire for greater political integration in Europe. Under President Vladimir Putin, Russia has maintained its status outside the American sphere. Putin takes pride in his ability to act independently on what he sees as Russian security interests. Russia, of all the European countries, is the only one that cultivates its own sphere of influence outside of—or in conflict with—America’s.

Washington exerts its military dominance worldwide. This has kept the international system favorable to American economic and ideological interests. It simplified a world of many militarized, independent states capable of unilateral (and very deadly) action into one in which the United States has an immense sphere of influence, and only a handful of global competitors, like China and Russia, are capable of unilateral action. Most states in the American sphere rely on the United States as an ultimate security guarantor. Therefore, they can “outsource” security to America; effectively disarming themselves and becoming incapable of taking independent military action.

The result of this de facto disarmament of states within the American sphere has also tended to mitigate and prevent regional conflicts. In Europe, where regular wars had been a natural occurrence for centuries, peace is now the norm. The term “frozen conflict” is regularly used to describe the Russian strategy of stationing troops in previously warring states, such as in Moldova or Georgia, to “freeze” tensions. But America perfected this strategy decades ago: Britain and France, or France and Germany, no longer go to war with one another—a sharp contrast to their long history of doing so.

Most European countries with American military bases are simply dependent on the United States for military power, but some would not exist at all without the intervention and continued presence of American troops. Bosnia and Kosovo are two examples of such countries. American intervention in the Balkans in the 1990s prevented Serbia—and to a lesser extent, Croatia—from occupying and integrating Bosnia and Kosovo.

When Belgrade was the capital of Yugoslavia, the country was on the edge of viability as an independent, neutral military power. Under Josip Broz Tito’s leadership, it was even almost viable as a patron to other client states. Tito’s Yugoslavia was a key organizer of the Non-Aligned Movement and provided armaments to anti-colonial players like the Algerian National Liberation Front and the Ethiopian government in the 1950s. Now, Belgrade is just the capital of Serbia. Other former Yugoslav republics, like Croatia and Slovenia, have been fully militarily integrated into NATO, and others like Bosnia and Macedonia are well on their way. Montenegro and Kosovo used to be part of the Serbian Yugoslav Republic, but Montenegro seceded from Serbia and recently joined NATO, while Kosovo declared independence—still disputed by Serbia—and hosts U.S. military bases.