Why America Should Deploy the U.S. Navy to the Baltics 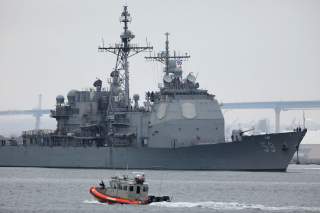 Great power competition has created an opportunity for the United States Navy to bolster alliances and partnerships, hone its capabilities, and deter a resurgent Russia through increased operations in the Baltic region. America should boost its naval activity specifically in the Baltic Sea, the North Sea, the Norwegian Sea, and in North Atlantic approaches to these waters. Also, the U.S. should pursue a strategy of persistent regional maritime presence as a means to advance national interests through unscheduled, and short notice, deployments, and patrols by U.S. warships.

The National Security Strategy reaffirmed that “a strong and free Europe is of vital importance” while the National Defense Strategy went even further, stating the need to “fortify” NATO and work with European allies and partners to deter “Russian adventurism” and aggression. America’s Navy fleet structure is already changing to address dynamic challenges from Russia but is not a substitute for sending forces forward. Increased naval operations in the Baltic would signal steadfast U.S. commitment and provide a mobile force capable of addressing regional maritime challenges. Furthermore, the benefits of having naval forces in the area and ready to respond with scalable defense options are undeniable.

Allies and partners have been vocal in requesting increased U.S. involvement in the region. Poland proposed permanent basing of American forces by offering America infrastructure and financial incentives. Also, both Sweden and Finland expressed willingness for greater participation in exercises and operations with America. More overtly, Germany also suggested it is open to the local basing of U.S. Navy ships, and Lithuania has solicited the deployment of American air and maritime defenses. These requests come at a time when there is no policy of continuous naval presence despite several security concerns and calls from American allies for U.S. deployments. Additionally, these requests come on top of reports suggesting that the North Atlantic Treaty Organization (NATO) has several command and readiness issues that an adversary could take advantage of.

The U.S. Navy is combat capable, incredibly versatile, and well suited for independent deployments. America is well suited to maintain a persistent presence with at least one cruiser or destroyer in the area – overlapping and varying the duration of deployments and patrols to minimize gaps. Ideally, these deployments would also increase U.S. naval strength to two, three, or more ships when practical. American cruisers and destroyers have already demonstrated the ability to integrate with multi-national forces and should be prioritized over other warships. These two classes of ships should be the focus of any deployment because of their ability to perform a wide range of missions (although littoral combat ships could be considered once they are ready). Constant or near constant operations by cruisers and destroyers would improve air and maritime awareness while bolstering air and ballistic missile defense, surface and anti-submarine warfare, cruise missile assets, and enable a broad range of military actions.

Frequent and continuous maritime operations would also normalize U.S. cruiser and destroyer activity in the area, making it part of the routine pattern of life. However, the initial surge in activity required to implement this strategy should be done in a manner to prevent state competitors from interpreting it as escalatory. Yet, greater familiarity, interaction, and adherence to agreements on conduct and action can have a positive effect; leading to safer and more responsible exchanges between forces at sea. These experiences can help avoid misunderstandings and reduce the likelihood that these U.S. forces would be misconstrued as aggressive, even in these tense times.

U.S. warships provide credible defense, access, and flexible response options in a way that land-based forces cannot. This point was inferred by Bruce Stubbs of the U.S. Naval Institute, who emphasized the role of seapower in the Baltic but stopped short of advocating for continuous operations by cruisers and destroyers.

Routine visits to the same ports and nations also provide an opportunity to build nascent logistics to enable maritime activity. Temporarily stationing U.S. warships in, or conducting patrols out of, principal seaports would lead to the development of infrastructure and pier services as well as efficiencies in everything from mail and personnel transfers to refueling and ordnance onload. Another benefit is that all of this regular activity would refine relations with the host nations, which would be beneficial especially in a time of crisis.

For example, the Secretary of Defense expressed a desire to create a posture that "will prioritize for warfighting readiness in major combat, making us [the United States] more strategically predictable and reliable for our allies but operationally unpredictable to any adversary." The U.S. Navy can do this; reinforcing alliances and partnerships with credible forces while destabilizing competitors with unscheduled deployments, nearly unlimited access, and the ability to execute multi-domain missions. In fact, ship schedules can even become more flexible and less predictable than the case under the current optimized fleet response plan (OFRP). Indeed, Secretary Mattis highlighted this with his concept of “dynamic force employment.” Done deliberately, more dynamic planning within the OFRP construct can improve proficiency, responsiveness, and flexibility. This dynamic force employment will leave ships available for more time at sea in addition to, or in place of, standard deployments.

Therefore, persistent deployments and patrols easily fit into the Pentagon’s vision, with a constant or near constant naval presence demonstrating strategic predictability while introducing strategic unpredictability. Increased U.S. Navy patrols and deployments, of varying duration, type, and number, would make capabilities and maritime activities more unpredictable to competitors. Leveraging combined forces and seaports would also keep potential adversaries off balance and improve military responsiveness. Finally, the U.S. would also see an improved ability to integrate against high-end threats by working with other militaries across multiple warfare areas and domains.

Boosting American naval activity in the region would advance vital interests in this era of great power competition and is consistent with U.S. national security and defense strategies. A strategy of persistent maritime engagement in the Baltic would reinforce U.S. commitment while deterring a resurgent Russia through operational unpredictability and sustained proactive presence of credible American seapower.

Matthew Krull serves as a fellow at the Atlantic Council and is a Surface Warfare Officer in the U.S. Navy. The views and opinions expressed are the author’s alone and do not represent the official position of the Atlantic Council, U.S. Navy, U.S. Department of Defense, or U.S. Government.