Why America Should Lose Sleep Over Greenland (Think China) 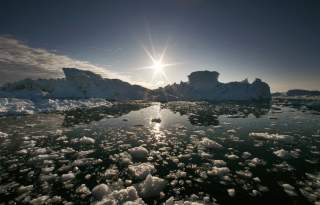 Ask a Dane about independence for Greenland, and you’re likely to see a lot of eye rolling. Yes, Greenland has had home rule since 1979, and self-rule since 2009, and it’s logical to assume the next step is complete independence, however impractical, for a vast territory of only 56,000 inhabitants. But the real issue for the world’s largest island is not independence from Denmark—but rather increasing dependence on China. Americans should be aware of China’s designs on Greenland and understand the implications of what could become a sustained and heavy investment. As a counterweight, the United States could play a significant role in Greenland’s future, if only it would pay attention.

Greenland’s upcoming parliamentary election on April 24 would be a good place to start. The thirty-one-seat parliament is comprised of five political parties, and the primary issues are fishing, climate change and foreign investment. There are darker issues too—familiar to Greenland’s fellow Arctic communities in Canada and Alaska—societal ills such as drugs, alcoholism and lack of opportunity for the youth. The “when” question of independence is a constant underlying factor in Greenland’s politics, followed closely by the pragmatic “how” question of paying for it. Greenland still receives a Danish subsidy of $500 million annually, roughly half of Greenland’s budget, and is wide open to ideas on how to become self-sufficient.

The joker in the deck is climate change. A generation ago talk of far-flung economic activity would have been a hypothetical exercise. No one was interested in a land covered in mile-deep ice. But today’s accelerated rate of melt is changing the ground under the feet of every Greenlander. Only 80 percent of the territory is ice-covered, a percentage that declines each year. Examples abound on how warming and melting have already made an impact: root crops flourish in the southernmost part of the island; the retreat of glaciers reveals stunning scenery ripe for tourists, if only infrastructure to accommodate them existed. The awakening landscape also reveals opportunities for mining and industry—opportunities that should be seized by the United States.

Greenland is well aware that it needs foreign investment, and is in no position to be choosy. Greenland sees tourism as a path toward independence, and it views its neighbor Iceland with admiring eyes. Also a former Danish colony, Iceland carved a fertile niche market for tourism. As one of the countries hardest hit by the 2009 global financial crisis, it reinvented itself as an unspoiled tourism destination, growing the sector from 600,000 visitors in 2000 to 1.8 million by 2016, with all the attendant problems large numbers of tourists bring to a tiny country of only 335,000 people. Problems, Greenland says, it would love to have.

And China would love to help. Economic investment in the Arctic is fully in line with its first Arctic Policy paper released in January, and its determination to exercise power as a “near-Arctic state” is fully in evidence in its economic diplomacy in Greenland.

Greenland has been susceptible to Chinese wooing. Prime Minister Kim Kielsen led a delegation to Beijing in October 2017 to explore ways to deepen ties. Chinese firms are interested in expansion of three of Greenland’s airports, including runway lengthening and infrastructure development essential for fledgling tourism. Chinese firms also have invested in Greenland’s mineral sector which has become more accessible thanks to climate change. Greenland has issued more than fifty permits for exploration, many of them to Chinese firms. Rare earth elements, uranium, and zinc are under development at Kvanefjeld by an Australian-Chinese partnership. An Australian firm planning to mine zinc just signed an MOU with a Chinese firm, and a Hong Kong–based company holds rights to a potential iron mine. China is also constructing a scientific research base and satellite station. This heavy courtship from China threatens to swamp Greenland’s tentative steps into the global marketplace.

Not all are happy with the sudden Chinese interest. When a Chinese firm tried to buy an abandoned U.S. naval base in late 2016, Denmark, still in charge of Greenland’s foreign and defense policies, stepped in at the eleventh hour to block the sale. A large Chinese presence on the island would challenge remaining Danish links, compromise fragile political institutions and potentially exert undue influence as the dominant foreign investor. China’s interest is not solely economic—it seeks influence in Artic affairs and Greenland is increasingly looking like a soft entry point. With Denmark as a founding member of NATO, Greenland’s geostrategic contribution to the alliance has been taken for granted. As a future independent country, Greenland might well choose to loosen the bounds of an alliance that has taken much and given little. That would be a severe loss, and one the United States should strive to prevent.

China’s forays look all the more worrisome because Greenland’s overtures toward Europe have been surprisingly unproductive. It has probably exhausted all that it can expect from the stale postcolonial relationship with Denmark, weighted by language and cultural identity disputes and quarrels over self-reliance vs. old world paternalism. Greenland’s experience with the EU was also an unhappy one. It left in 1985, frustrated over unrealistic fishing policies devised in Brussels for a people who still relied heavily on hunting and gathering. Greenland is also not alone as an Arctic EU skeptic. Iceland and Norway have kept at arm’s length from the EU for similar reasons. Greenland is trying again with seal skins, its second biggest export, which were banned by the EU in 2010. After winning an “Inuit exemption,” it sold 34,000 skins in 2016, a fraction of the 160,000 before the ban.

But there is another option for Greenland: the United States has a history in the country that far predates Chinese interest. The United States oversaw Greenland after Denmark fell to the Nazis in 1940. The United States erected a variety of military installations and monitoring stations, seeing Greenland as a geostrategic midpoint between the Western Hemisphere and Europe. A somewhat mixed legacy, the inevitable trash and debris—some of which may be radioactive—left Greenlanders leery of foreign military presences.

After the war, the United States was quick to appreciate Greenland’s continuing value as a Cold War defense monitoring point and offered the Danes $100 million for it. The Danes declined, despite the considerable expense of the annual subsidy. But Thule Air Base, founded in 1943 and now run jointly by Americans, Danes, Canadians and Greenlanders, symbolizes a significant and long-running relationship. It’s a thin plank, but it’s a start—a rare example of Americans and Greenlanders working together.

Thule got America in the door long ago, but it’s high time for a new initiative to get it to the table. A modern relationship with Greenland ought to be defined not solely in military terms but in trade, investment, tourism, research, and the exchange of people and ideas. Americans should respect the fact that Greenland has a choice: it can strengthen ties to North America—its geographic home; it can realign itself to Europe; or it can seek help further afield, particularly from China. The United States could make a strong case, since Greenland is geographically part of North America. Its Inuit communities have more in common with communities in Canada and Alaska than with Washington, Copenhagen or Beijing. Most of the population resides on the southwestern shores, facing Canada and the United States.

There’s an easy way for the United States to stay in the game. Washington could signal its interest in engagement by opening a small consulate, or an American Presence Post (APP) in Nuuk, Greenland’s capital. This could be a modest affair, staffed by a single officer reporting back to the U.S. embassy in Copenhagen. The APP model has been successful in France, Brazil, and elsewhere, and offers the undeniable advantage of inserting an American diplomat as a permanent feature on the nascent diplomatic landscape. The point is not to offer consular services, but a friendly diplomatic face to engage with Greenlandic society—everyone from parliamentarians and those working in the business, education, arts and environmental sectors. When Greenlanders want to meet with Americans, this officer would be the go-to person, helping organize trade missions, professional and educational exchanges, and bringing experts from all walks of life to meet with Greenlanders. Former secretary of state John Kerry set the stage for deeper diplomatic engagement during his visit to Greenland in July of 2016. Now it’s time to follow up.

A U.S. diplomatic presence could serve as Greenland’s entrée to many other institutions in the Western Hemisphere. Ultimately, Greenland might find a newly negotiated NAFTA to be a more comfortable fit than the EU. Canada too, should reach out and explore deepening relations with the territory that has much in common with its own Arctic region.

One thing is certain—the United States won’t be the only country trying to establish a foothold on Greenland’s growing embassy row. In an era when U.S. military presence is all too present, this pragmatic exercise in soft power would nicely balance America’s interests and offer Greenland a fresh alternative.