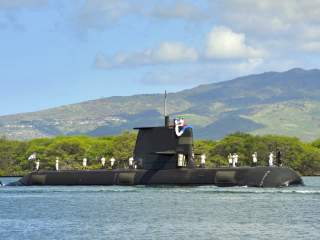 Despite the change of government and the recent downturn in its economy, Australia has just recommitted to a modest military buildup. This is welcome news. Prime Minister Malcolm Turnbull has announced his intention to fully fund the purchase of up to twelve new submarines and buy or build a number of other ships, planes and other weapons systems as well. Australia’s military budget will reach the target level of 2 percent of GDP and the nation will reaffirm its status as America’s key ally anchoring the southern swath of the Pacific Ocean region. Simultaneously with his commitment to this investment plan, Turnbull announced his concern about China’s behavior in the South China Sea, leaving little doubt about one of the principal motivators behind his initiative. Yet the buildup is modest, measured and reasonable, and Beijing would be wise not to object too strenuously.

However, like all matters concerning China these days, it is important to get the balance right. The United States and allies need to be strong and steady, without overreacting to the situation. In its regional foreign policy, China is being more assertive than aggressive. It is expanding its reach with reclaimed islands, and with the construction of new military facilities atop these formations and on disputed existing islands in the Paracel and Spratly chains. It is not, however, conducting major military operations against the people or military forces of other states. As such, the policy of America and its allies towards China should be met with one part of reassurance and restraint for every two parts of resoluteness, notionally speaking.

Thus, the United States needs to be wary about one idea that has been circulating of late around Washington. In regard to that upcoming submarine buy, with a contract decision expected this spring or summer, there are three main contenders—led by Japanese, French and German firms respectively. Some U.S. officials are reportedly rooting for the Japanese company and conveying that desire to Australian counterparts. Their logic may or may not be based on a technical assessment about the quality and value of Japanese vessels versus those of other firms. Rather, their principle motivation may be political—a desire to see the Australian-Japanese security relationship tighten, largely in response to China’s recent behavior and its overall strategic rise.

This type of thinking makes me wary. Yes, good communications between Tokyo and Canberra are useful; yes, a stronger network of working security relationships among America’s Asian and Pacific allies would serve U.S. interests (and can be expanded and tightened further as a function of future Chinese behavior, as appropriate). But the notion that Washington should have any view on the winner of this contract—or, worse, make its views known to the Turnbull government in a polite but nonetheless unambiguous effort to pressure Australia—seems a step too far.

For one thing, France and Germany are U.S. allies too—and they are allies that the United States wants to see as more active in the Asia-Pacific region themselves. France has interests in the region already, in French Polynesia; Germany has been a stalwart participant in the Afghanistan mission and thus has been moving its own sights further eastward in recent times as well. These are desirable developments that should be further encouraged—as then Secretary of State Clinton argued at a speech at Brookings in late 2012, asking European allies to “pivot with us” to Asia. Indirectly weighing in against their proposals is thus a questionable approach by the United States.

To be sure, Japan is the more crucial partner for Washington in the Asia-Pacific. It is also, however, the more complicated partner, in light of the Abe government’s continued difficulty with the history question. Let’s not overstate the matter. Abe is criticized too much by Beijing in particular for Japan’s supposed military buildup, which is even more modest proportionately than Australia’s, and quite modest compared to China’s own military expansions of recent times. That said, Japan is a complicated player and partner in the region, and there are downsides to asking Australia to favor it too much in a competition that arguably should be about the technical and economic merits of the respective bids and nothing else.

Let me be clear: Japan is an excellent ally, and one that we should not in any way apologize for. But what is apparently at issue here is a question of whether, potentially in the face of countervailing technical arguments, Canberra should base a decision on a future submarine buy on a desire to favor this relationship over other important relationships with important western democracies and American allies. That is a different proposition altogether.

Wherever Australia gets the submarines, it should be willing to work with Japan on future security collaborations, as its government sees fit. The United States should encourage any and all such cooperation, and facilitate it where appropriate. But it should not overplay its hand on this matter, or take sides in a situation where several of its key allies have interests at play, and where there are potential strategic advantages to any winner among the three contenders. Let the best submarine win!