Why Is America So Scared of China? 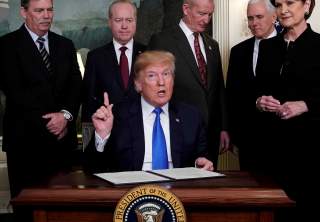 More and more, Americans seem to fear China. In one sense, their reaction is understandable enough. As China has gained power—economic, technological, and military—it has morphed from almost an American protégé to a rival. American enthusiasm from earlier in this century, including even wonder at how quickly China adapted to markets, has been replaced by a more realistic wariness. Even considering the altered power balance, today’s fears seem to have taken leave of reality. Although China does indeed present much about which to be wary, even to fear, it is not as formidable as some now seem to claim. It has weaknesses. People, policymakers especially, need to recognize those weaknesses as well as China’s strengths.

Broad polling trends are clear. Over the last five-ten years, American fears have grown markedly. The pollsters seldom ask about fear specifically, but the mix of approval and disapproval tells the story. According to Pew, the proportion of Americans with an unfavorable opinion of China has risen from 39 percent in 2007 to 55 percent more recently. In 2018, Gallop noted that 11 percent of Americans identified China as the “greatest threat to the U.S. economy,” a significant percentage considering the long list of other threats they could have chosen from. More significant is that the figure has risen from 2 percent in 2007. Strangely, the deterioration in American attitudes has begun to reverse, though hardly significantly, during more recent months despite ongoing trade tensions.

The American fear of China is still more evident in survey details. A recent Gallop poll on threats to U.S. interests noted almost 90 percent of Americans listed China’s economic power, and an equal number listed that country’s technological power as causes for concern. Meanwhile, Pew shows a slightly different picture. It found only 29 percent of respondents feared China’s military while 58 percent feared its economy, with 62 percent citing China’s holdings of U.S. debt, 58 percent cyberattacks, and 51 percent citing jobs and trade. A private poll commissioned by the firm Axios revealed that some two-thirds of Americans feared China’s economic strength and nearly as many feared its technological prowess. A recent gathering of prominent Silicon Valley venture capitalists not too long ago at the so-called Churchill Conference gave voice to such fears, predicting, with virtually no dissent, that by 2020 China will overtake the United States in the development of supercomputers and artificial intelligence, especially self-driving vehicles. Responding to all these feelings, Vice President Mike Pence, speaking recently at the Hudson Institute, stressed the need for the United States to contain China.

To be sure, China gives America and its residents ample cause for concern. China is growing much faster than the United States, some six percent a year in real terms. However, even at that rate, it will still take Beijing a long time to overtake the United States. There is no denying that at such a growth pace China is quickly amassing relative and absolute economic power. Legitimate concerns also arise from China’s less-than-fair trade policies. Foreign firms, for instance, need a Chinese partner to enter their economy and almost always have to relinquish technological and commercial secrets as well. Beijing also clearly wants to alter—if not upend—the existing global economic arrangements. It has claimed large parts of the East and South China Seas, imposing on its neighbors and implicitly, if not explicitly, threatens trade flows. Its so-called “One Belt-One Road” push to link Asian trade with the Middle East and Europe by land certainly would change trade patterns and also advances Chinese dominance. So too does the surge in Chinese purchases of American firms and China’s heavy official investing in Asia and Africa. For instance, Beijing’s Asian Infrastructure Investment Bank would seem to fit with such efforts.

Without downplaying any of this, it would nonetheless be easy to exaggerate the threats. Take, for example, the question of Chinese ownership in the United States. Many resist Chinese purchases for fear that it would give Beijing powerful influence. Ownership would, of course, extend Chinese economic power, but popular fears seem to go further, suggesting that somehow Chinese ownership could thwart U.S. policy. In this, it pays to remind ourselves that ownership is not sovereignty. No firm, regardless of its ownership, can violate the laws or regulations of the jurisdiction where it resides much less actively frustrate government policy. Analogous fears seem associated with the Confucius Institutes sponsored by Beijing on American campuses. Their propaganda might confuse some students and maybe convince some that Chinese culture and ways are superior to their American equivalents, but that would hardly distinguish these institutes from any number of other groups on campus promoting alternative cultures as superior. Beyond this, the Confucius Institutes could hardly prepare a fifth column movement, as some of the most fearful claims. That would require more discipline than they could organize, especially without a leak.

On the technology front, is not even apparent that Chinese gains would necessarily threaten the United States or its industry. After all, China has gained from American innovations and found ways to apply them at least as fast as the United States has. So have other countries gained even though they are less inclined than China to steal intellectual capital. There is every reason to believe that this country could do the same with innovations made elsewhere. To be fair to the gathering of venture capitalists in Silicon Valley, where fears of China’s technologic process received considerable attention, one participant made just this point, arguing that technology is far from a winner-take-all activity and that innovation in China will benefit economies and consumers everywhere. Indeed, if history is any guide, innovation, wherever it occurs, tends to inspire further innovation as others apply it to their particular circumstances.

What is most remarkable about those who promote such fears is how they tend to characterize China’s weaknesses as strengths. The National Security Agency’s statements on Chinese technology, for example, call for an American response to Beijing’s policy of subsidizing semiconductor production. The venture capitalists and their Silicon Valley associates at the discussion quoted earlier similarly pointed out that without redoubled American efforts the “lockstep” march of Beijing and Chinese tech leaders will “swamp” U.S. efforts, especially in supercomputers and artificial intelligence. To be sure, concerted efforts can make great strides, but should innovation shift, as is its tendency, such a “lockstep” emphasis almost always misses the change. It is certainly less flexible than the less directed approach used in the United States and elsewhere in the West. In the face of inevitable technology shifts, those following orchestrated, top-down direction waste effort and misuse resources, financial as well as physical and intellectual. Indeed, China has fallen into this trap before, which is why it still has empty cities and carries an excess of debt used to finance that now clearly pointless effort.

Policymakers and the public would also do well to look into the motives of groups who warn of China’s prowess. All those issuing warnings—whether the NSA, the National Science Foundation, the Energy Department, or Silicon Valley—also call for more spending, especially by Washington, to meet the challenge. Such money flows would, of course, benefit the particular groups making these forecasts. The fact that they would benefit from increased spending does not mean their claims are untrue, but it does raise a need for further investigation before rushing to meet the challenge they describe in the way that they prescribe.

The whole picture is only too reminiscent of this country’s fear of Japan in the 1980s and early 1990s. Back then, many in business and government extolled the close cooperation between Japan’s government, particularly its Ministry of International Trade and Industry (MITI), and Japanese industry to direct that country’s innovation and investment efforts. Then President Bill Clinton led in such thinking. That cooperation, he and others widely claimed, would allow Japan to supplant this country’s technological and economic edge. For much the same reason, a 1980s study by the Massachusetts Institute of Technology (MIT) predicted most the economic balance would shift to Japan. In 1985, Theodore H. White, the Pulitzer Prize-winning author, wrote in the New York Times of “The Danger from Japan.” The Atlantic wondered if the United States could “contain Japan.” The anxiety became so intense that members of Congress compromised their dignity (a fraction of which still existed at the time) by smashing Japanese electronics on the steps of the Capitol. Japan, however, failed to triumph, in large part—if not entirely—because its top-down efforts, those that so many now fear in China, missed the changing direction of innovation.

None of this is to say that China will go the way of Japan. Perhaps China will prove more flexible and succeed where Japan failed. But matters nonetheless do look similar. Similar fears have gripped the country before. Even if China were to succeed where Japan failed, the nature of innovation suggests that America can benefit from innovation elsewhere and even improve on it.

Meanwhile, China’s efforts to use its growing economic and diplomatic strength to upset existing relationships have met with as much failure as success. Its enormous investments in Africa, for instance, have begun to evoke African fears of a “new colonialism.” Many in Asia complain about Chinese bullying and have refused Chinese development money. China does indeed present many concerns, but today’s fears exaggerate Beijing’s strength while minimizing its task of gaining the dominance that many believe is imminent.