Why America Was Denied a Blue Wave and a Red Wedding 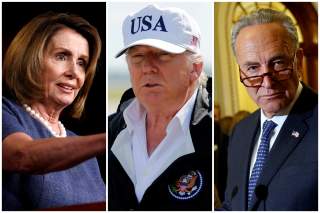 The blue wave didn’t materialize. The red tide didn’t come in. Still, while we still do not have final numbers, there is no way to spin the evening as good news for Republicans. Not only will they see important committee chairmanships pass to the Democrats—more on that in a moment—but they lost some important races and more than a few high-profile incumbents, including the defeat of Nevada Sen. Dean Heller, Texas Rep. (and House Rules chair) Pete Sessions, and a one-time presidential hopeful, Wisconsin Gov. Scott Walker, whose electoral luck after a recall and a reelection finally ran out.

But there are three important and sobering realities to consider as the United States closes out the 2018 cycle and moves into the first days of the 2020 presidential race.

First, the future of the Republican Party has been decided. If this was a referendum on President Trump—as he insisted it was—then we have our answer: the president is deeply unpopular with the majority of the American people, but wildly popular in his own party. The total number of votes cast for Democrats has nothing to do with how many seats will be won or lost, but it does serve as a barometer of the president’s popularity. By that measure, the fact that the overall vote was nine percent higher for the Democrats than the GOP is a clear rebuke to the president.

The Republican party itself, however, is a different story. Republicans, especially older voters, also surged to the polls, and reaffirmed that there is literally nothing that will sway them from doing as the president asks. If Trump is to blame for some of the House losses, then he can also rightly take credit for at least some of the close saves on an otherwise bad night, especially in the Senate.

But Democrats now face the question about whether they can govern in the age of Trump. Republicans are rapidly becoming the party of uneducated white males and angry old people, leaving the Democrats as the party of everyone else. Can the Democrats accommodate an influx of new voters—including suburban educated women, the one Republican group that seems to have defected from the GOP—and broaden its appeal on something besides revulsion to Donald Trump? If they fall under the sway of their own extremists, then they will make Trump’s 2020 case for him and lose again.

Third, Democrats now hold crucial chairmanships in the House, an especially important takeaway for those of us concerned about national security. If the Democrats have accomplished nothing else, they have pushed Devin Nunes out of the chairmanship of the House Permanent Select Committee on Intelligence, captured the Judiciary Committee, and (if current numbers hold) rid the Congress of California’s Dana Rohrabacher, an American legislator so enamored of Vladimir Putin that he would have been more comfortable in the State Duma than the House of Representatives. This is all to the good.

The question now is what the Democrats will do with this power. They can, and should, issue subpoenas into everything from Nunes’s shenanigans to the White House’s possible abuses of power. That’s what congressional oversight means: oversight. The Republicans, utterly beholden to Trump, failed in this duty. Divided government is the only remedy in such a situation.

But the Democrats must beware the same partisan temptations. If they try to bury the White House in a flurry of frivolous writs—or if they embark on a quixotic quest for impeachment—they will be little better than the Republicans they’re replacing. Instead, they must show that they are capable of governing with all of the qualities the GOP abandoned: fairness, probity, prudence and patriotism.

Opposing Donald Trump has bought the Democrats and the country a reprieve, and halted America’s authoritarian backsliding—at least for the moment. It is now the Democratic Party’s decision whether this is merely a pause or a new direction.

Tom Nichols is professor of national-security affairs at the Naval War College and an adjunct at the Harvard Extension School. His opinions do not reflect those of the U.S. government.