Why American Voters Have Difficulty with Free Trade Agreements 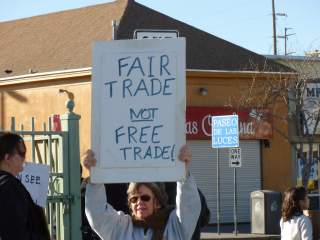 As a member of Congress for twenty years, I supported every measure to open more overseas markets to U.S. goods and services. While I’m a strong free trade advocate, my goal is to present the sentiments of American voters as they enter the final weeks of an extraordinary election.

Free trade agreements (FTAs) are under fire from both the Democratic and Republican nominees for president and their respective political parties. Hillary Clinton’s views on the Trans Pacific Partnership (TPP) have shifted, but Donald Trump has always been opposed. Clinton’s running mate has changed from cautiously supporting to opposing TPP. Trump’s running mate has always been an ardent supporter of free trade agreements and TPP, but now he “questions their wisdom.”

The Republican Party platform differs dramatically from the 2012 document, using more cautious language in describing the benefits of free trade. In fact, the platform states that the Trans Pacific Partnership (TPP) should not be voted on in an after-election “lame duck” Congress. The Democratic Party platform for 2016 likewise reflects a more protectionist position than the 2012 document. Though the platform does not specifically mention opposition to TPP, the emphasis in the 2016 document is now on trade enforcement.

Since the 1980s, trade has departed from being a bipartisan issue to being primarily supported by most Republicans and opposed by most Democrats. What is different this year is that several Republican candidates have backed down from their classical free trade position, reflected in the pending TPP trade deal, partially in response to the rhetoric coming from the leaders of both political parties. Note that the incumbent candidates voted for TPA for the President.

I served with most of these legislators and know their sensitivity to their constituents. The purpose of this article is not to criticize them for changing, but to illustrate how their constituents shifted their views on trade.

As a general rule, Members of the House and Senate vote for or against FTAs based upon the impact of the agreement on the state or congressional district they represent. The difficulty legislators have on these votes is when the effect is unclear on a particular state or congressional district. When I was a freshman in Congress, I was confronted with how to present NAFTA to my constituents. I favored it, so I took the initiative to organize a trade education event in my district and helped to turn the tide of public opinion around to support NAFTA.

Now, public views have shifted. A recent poll conducted by Politico Pro-Harvard “shows an across-the-board skepticism toward international trade, with 65 percent of Americans believing that trade policies have led to a loss of U.S. jobs. Just 13 percent believe trade policies created jobs and 15 percent said it had no effect.”

According to the Pew Research Center, Republicans have shown the biggest shift. In June 2015 (before Trump announced his candidacy for President), Republicans supported free trade by a margin of 51 to 39 percent. But in August, when asked if past free trade agreements are a bad thing, the margin flipped to 61 to 32 percent. Also, Pew found that people with a high school education or less said that trade agreements had hurt their family’s finances by a ratio of nearly two to one. Plus, people who are opposed to free trade are more motivated to vote, similar to other single-issue voters.

Positioned at the intersection of dramatically shifting demographics and technology, Americans are relating to institutions in a fundamentally different way than before. Gallup reports that the public’s trust in institutions (including Congress, the Presidency, the Supreme Court, religions, the press, and military, among others) is exceedingly low. Moises Naim, the former editor of Foreign Policy, wrote, “Most people look at the world, their neighbors, employers, clergy, politicians and governments with different eyes than their parents did.” People’s views of all institutions – companies, governments, religions – are changing so rapidly that predictability and stability can no longer be assumed.

People are getting much of their information from the Internet, particularly millennials, and not even taking the time to fully read a newspaper article. The constant shifting from one site to another, just looking at the headline and the first sentence or two, destroys our powers of concentration and critical thinking. In this age of instant communications, people are talking more but communicating less; they are exposed to so much information that they are on overload. Ironically, when we should be “coming together” more and easier than ever before, information is becoming white noise, resulting in us becoming more isolated from each other, insular, lonely, and, obviously, less trusting.

It is through this lens that Americans view important issues, including trade. For voters, trade is symbolized by: (1) publicity of plant closures and movement of production overseas; (2) a feeling of being left behind while “elites” get ahead; (3) the failure of free trade proponents to effectively communicate its benefits; (4) the failure of government programs to assist displaced workers; and (5) overall distrust of the political system, especially of Congress.

United Technologies decided in February 2016 to close its Carrier plant in Indiana and move production to Monterrey, Mexico, directly idling 1,400 workers. In a radio interview on July 28, 2016, Republican vice-presidential candidate and governor of Indiana Mike Pence said the move was a “jarring experience. I was stunned by that. They said, all the people we compete with are already manufacturing in Mexico, and we’re just going to go there. That tells me something’s wrong and we’ve got to change it.” A Carrier representative announced the closure to employees saying, “This is purely a business decision.” Afterwards, voters saw the dramatic footage in a cell-phone video of the announcement, which has been viewed nearly 4 million times.

Ford also announced it was moving all of its small car production to Mexico. Even though the CEO of Ford said that no American jobs would be lost, many Americans do not trust big business leaders and perceive these closures as the sliding slope to destruction of manufacturing in America even though over the past five years, car makers have invested nearly three times as much in building new or upgrading plants in the United States than in Mexico. Initially, NAFTA was supposed to raise the standard of living in Mexico so it would become competitive with U.S. wages, incentivizing American companies not to shift production there. Instead, both the Ford and Carrier representatives said the reason for the move was to seek a less expensive labor environment.

Unfortunately, foreign companies starting, saving or increasing production in America don’t get the publicity of plant closures. This is because people in suits break ground for a new facility is good news while a plant closure is bad news that focuses on individual hardships. I have been to several plant groundbreakings, including a $3 billion investment by Lotte Chemical that will employ 2,100 workers in Louisiana. There is no lingering images of a groundbreaking ceremonies, but only one with padlocked gates and distressed workers. That’s what moves voters at the polls.

Common Man vs. the “Elites”

Americans feel locked out of the system. Many believe that their problems are caused by an “elite” class who do not understand them, but control their lives.

Heather Conley is the Director of Europe Programs at the Center for Strategic and International Studies (CSIS). In a recent blog for Carnegie Europe, she criticizes people in positions of authority, the “elites” – elected and high ranking appointed officials, academics, and think-tank operatives, including herself – for not connecting with the American people in making, explaining, and promoting foreign affairs and trade policy.

The American middle class feels under siege because of stagnant wages, especially at a time when CEO pay has increased. If Americans’ dreams are shrinking, then political turmoil becomes the new norm.

The Difficulty of Explaining Benefits of Free Trade Agreements

Arizona Senator Jeff Flake commented why free trade agreements are falling in disfavor with the American public: “On the campaign trail, it’s just too difficult to quantify the gains from free trade and too easy to point at a plant that closes and scapegoat trade.”

Free trade agreement successes have become increasingly more difficult to explain, in spite of overall advantages to America as a whole. For example, facially, the Korea-U.S. Free Trade Agreement (KORUS-FTA), shows a growing trade surplus in favor of Korea since 2011. However, the independent, bipartisan U.S. International Trade Commission estimated that KORUS FTA improved the bilateral U.S.-Korea merchandise trade balance by $15.8 billion. Total exports of U.S. goods and services to South Korea have increased by nearly five percent between 2011 and 2015. Nevertheless, these statistics do not make for a rousing campaign speech.

The Failure of Government Programs to Assist Dislocated Workers

Even the most ardent advocates of open markets trade acknowledge that free trade does not work for all people at all times. These are the individuals who are left behind, particularly among older adults with limited or dated skills. There are existing federally-supported Trade Adjustment Assistance (TAA), programs that are designed to assist workers and companies transition into non-import sensitive industries. However, according to the Government Accountability Office, some of the training does not result in employment. Some workers think this training program is a joke. This has to change – individuals should be trained for jobs that exist and work more in partnership with local employers.