Why Americans Can Say Anything We Want 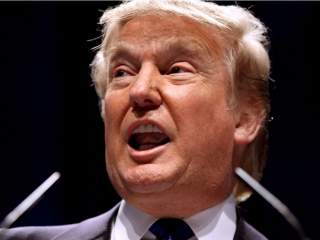 A committee of the British Parliament recently debated a petition to ban Donald Trump from the United Kingdom because of his anti-Muslim remarks. Members expressed surprise that the kind of “hate speech” banned in Britain is legal across the Atlantic.

In fact, Americans get to say pretty much anything we want, whether it’s at a public meeting, on the Internet or in a presidential candidate debate. It wasn’t always the case, though, and the change goes back to January 28, 1916. That was the day President Woodrow Wilson nominated Boston attorney Louis Dembitz Brandeis to the U.S. Supreme Court.

Brandeis was born in 1856, the son of immigrants from Prague. In 1879 he and a fellow Harvard Law School graduate started a small and soon extremely successful commercial law firm in Boston, and Brandeis began to involve himself in public affairs. From the 1890s up to the time of his nomination to the Supreme Court he battled against public transportation monopolies and the “too big to fail” trusts that were increasingly dominating the American economy. He invented savings bank life insurance as a way of getting laborers low-cost policies. He supported labor unions and exposed President William Howard Taft’s corrupt sale of Alaskan land. He viewed his activities as no more than involvement in the issues of the day, the responsibility of citizens in a democratic state. And he did it all without pay, thereby earning himself the title of “the People’s Attorney” and effectively creating the tradition of today’s lawyers who take on public causes for no compensation.

Brandeis was confirmed by the Senate and sworn in on June 5, 1916, in spite of the opposition of much of Wall Street and the former presidents of the American Bar Association, who viewed him as a dangerous radical. Three years later he and the other justices began hearing free speech cases.

The cases grew out of prosecutions under the federal Espionage Act, which was adopted while the country was in the midst of World War I. As amended in 1918, the Act criminalized what the government considered anti-war activities, including speech that questioned American involvement in the war, the constitutionality of the draft, or “any disloyal, profane, scurrilous, or abusive language about the form of government of the United States. . . or the flag. . . or the uniform of the Army or Navy.” More than two thousand people were prosecuted. Three of them took their cases to the Supreme Court.

The Court unanimously upheld the convictions. Justice Oliver Wendell Holmes Jr. penned language for the Court that quickly became part of the national lexicon. Congress enacted the law at a moment when the country saw itself in peril, he wrote. The Constitution’s First Amendment protected speech, but it “would not protect a man in falsely shouting fire in a theatre and causing panic.” The question to be considered in each case, he added, was whether the speech was “of such a nature as to create a clear and present danger.” Anti-war speech, he concluded, presented just such a danger.

Brandeis signed onto Holmes’s opinion. In the following year, however, he began to rethink its approach to speech. When the cases were decided, he said later, “I had not then thought the issues of freedom of speech out—I thought at the subject, not through it.” By 1927 he had thought “through” the subject and came up with the doctrine that now underlies the American approach to speech.

He did so in a case called Whitney v. California, which involved Anita Whitney’s participation in organizing a radical political party. There Brandeis emphasized the crucial connection between free speech and democracy. Citizens in a democratic state were responsible for involving themselves in public affairs and voting intelligently—otherwise, how did democracy make sense? Without access to all ideas, citizens would not have the knowledge necessary to make the decisions about public policies and political candidates that were their obligation. That meant hearing “bad” ideas as well as “good” ones, and challenging the “bad” ideas in order to shape their own opinions. History showed that today’s “bad” speech might well become accepted wisdom tomorrow. The only time that speech could legitimately be interfered with or punished was when it was meant to incite immediate law breaking.

Brandeis was not naïve. He understood that speech could be dangerous. Democracy, however, was based on the belief that the citizenry would support “good” ideas, even if it sometimes took them a while to get there. Speech, after all, was what he had relied on to win his public interest battles: an endless stream of lectures, public meetings and newspaper articles.

Brandeis’s formulation—that in the absence of immediate incitement, speech, no matter how noxious, had to be allowed—was eventually adopted by the Supreme Court. That is why today, Americans can engage in the kind of speech that would be illegal almost everywhere else in the world. Brandeis’s nomination one hundred years ago brought changes to American law and American democracy that neither President Wilson nor the senators who voted to confirm the nomination could possibly have foreseen.

Philippa Strum, a senior scholar at the Woodrow Wilson International Center for Scholars and a biographer of Justice Brandeis, is the author of Speaking Freely: Whitney v. California and American Speech Law.