Why America's Hospitals Are Flunking The Coronavirus Test 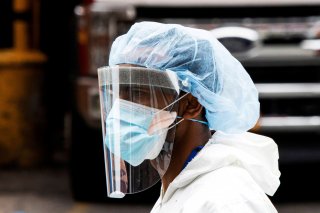 Entering a hospital should not be tantamount to a death sentence. But reports are proliferating in the media about hospital corridors filled with patients in dire straits who are essentially being left to expire as overwhelmed hospitals abandon, or don’t even initiate, the attempt to try and treat them. Far from meeting the challenge of the coronavirus, America is failing abysmally on its most basic moral responsibility: to safeguard the health and welfare of its citizens.

Consider the latest developments. The Los Angeles Times reports that “hospitals across the country have scrambled for personal protective equipment and other gear in short supply. Nurses and doctors have pleaded for donations online, telling stories of reusing masks and rigging trash bags as gowns. Many nonclinical hospital staffers say they, too, are woefully unprotected but feel like second-class citizens.” Then there is a piece from CNN detailing the crisis in Detroit. Perhaps the most shocking part is the revelation that “for patients, specifically elderly ones with high risk factors for Covid-19, two ER workers told CNN that staff at Sinai-Grace are calling the families of elderly patients and `encouraging them to make patient DNR (do-not-resuscitate)/DNI (do-not-intubate).’” In this regard, encourage appears to be a polite word for pressure. But contracting the coronavirus should not serve as a proxy for healthcare workers rendering life-and-death decisions on an ad hoc basis. Some states are moving to establish guidelines but they are steeped in controversy about provisions targeting the disabled and elderly.

If hospitals are unofficially instituting such policies, alarm bells should be sounding, particularly among the governors of Michigan, New York and New Jersey whose states have been hit the hardest by the coronavirus. When Hurricane Katrina hit New Orleans or previous calamities have occurred, Americans have not simply passively accepted failure but demanded results. The blandly reassuring statements being issued by hospital administrators and health-care providers that they are ensuring that all patients are receiving appropriate care should be invigilated by governors and mayors who have an obligation to not simply accept blindly these professions of good faith, but to help see to it that they are being acted upon.

More urgent action is also needed from the Trump administration. On the plus side, the Pentagon is working to address the medical crisis. In Seattle, Los Angeles, and New York the military has been accepting and treating patients, including the establishment of a medical care facility at the Jacob Javits Convention Center. Tens of thousands of members of the National Guard are also helping at local testing sites and to distribute food. In addition, Dr. Anthony Fauci, director of the National Institute of Allergy and Infectious Diseases, indicates that antibody tests should be available within a week. This would be of enormous benefit to healthcare workers as it could help determine who has and has not been previously infected by the coronavirus.

For now, Trump himself must recognize that prematurely opening up America for business, as his economic advisers are urging him to do, would likely gravely exacerbate the crisis. The whole idea behind flattening the curve is to try and prevent hospitals from being overwhelmed. Trump has already backed off an Easter deadline. But his fixation with his own popularity—today he tweeted, “Because the T.V. Ratings for the White House News Conference’s are the highest, the Opposition Party (Lamestream Media), the Radical Left, Do Nothing Democrats &, of course, the few remaining RINO’S, are doing everything in their power to disparage & end them. The People’s Voice!”—suggests that he is at times seeking to subordinate medical decisions to political ones. The problem, of course, is that even if Trump exhorted Americans to return to work, many would be reluctant to return to their previous patterns of behavior. The prospect of a sharp economic rebound would inevitably collide with fears about close contact with other Americans. The damage done to restaurants, airlines and other businesses will not be repaired quickly—if ever.

The magnitude and costs of America’s failure remain stupefying. As Susan Glasser correctly asks in the New Yorker, how did America, the richest country in the world, end up with nurses donning garbage bags? Some of it can be traced to the Centers for Disease Control which distributed a faulty test for the coronavirus in February. The CDC impeded university labs from devising their own tests. Weeks were lost as bureaucratic stumbling blocks were erected by government agencies. It is also that case that Trump’s refusal to accept that the pandemic was coming to America’s shores as well as his reluctance to order and distribute adequate medical supplies grievously hampered any effective response. This past week Trump went on to dismiss as fake news a report from the inspector general for the Department of Health and Human and Services that found grievous shortages of supplies at three hundred and twenty-three hospitals. He should proceed with greater caution: the latest polls indicate that a majority of Americans believe that the government has responded poorly to the pandemic.

But the current debacle cannot be laid solely at Trump’s doorstep. It is much broader than that. America’s practical and moral catastrophe in dealing with the pandemic is part of a pattern of woeful failure that has characterized it over the past several decades. Institution after institution has failed. It began with 9/11. Then came the financial crash of 2008. Now the pandemic and Great Depression 2.0. When will it end?