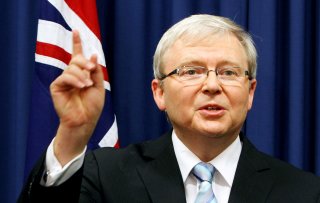 IT SEEMS remarkable that some U.S. congressional hawks are reported to have recently asked: “Who lost Australia?” At first glance, the very need to raise this question borders on the absurd. Notwithstanding the dip in Australian public support for President Donald Trump and the doubts that this key American ally, like others in the region, retains about the U.S. staying power in Asia, the last four years have seen Canberra emphasize its loyalty to the strategic alliance with the United States. This was perhaps best symbolized in the toast delivered by Australian prime minister Scott Morrison at the White House last September. On that occasion—only the second state dinner bestowed by the Trump administration after that given to Emmanuel Macron’s France—Morrison raised a glass in effusive salute to the past “100 years of mateship” between the two countries, mostly forged on battlefields in Europe, the Pacific and the Middle East, and also to “100 more.”

Little wonder, then, that the Australian Embassy in Washington is troubled that the proposition “Who lost Australia?” retains currency in the American capital. Even if its use is not widespread, the phrase carries baggage worth unpacking, for it highlights a central dilemma for the U.S.-Australia relationship as it responds to China’s rise. Not only does it clearly—and intentionally—revive the bitter, partisan recrimination in Washington following the coming to power of the Chinese Communists in 1949, its use now suggests that some in America think their grasp on Australian loyalties is slipping, that China is getting what it wants in terms of gradually peeling Australia away from the U.S. Asian alliance system. Perhaps it constitutes, then, a none too subtle American diplomatic ploy to remind its ally of the risk of getting too close to Beijing.

But Australia is not and moreover does not want to be “lost.” After all, this is an ally that has hosted American intelligence facilities on its soil for over half a century Moreover, many in Washington, and Canberra for that matter, see Australia as an exemplar of how to meet the China challenge. The very asking of the question symbolizes not a crisis in the U.S.-Australia alliance, but a lack of awareness in Washington as to Australia’s particular circumstances when it comes to dealing with the rise of China. Indeed, it shows once more the tendency amongst some U.S. observers to take its junior ally for granted, and to demand positions that Australia cannot deliver.

For the United States, then, its relations with Australia increasingly revolve around its geopolitical competition with China. A new consensus has emerged in Washington that the age of engagement with China, which has held sway from the early 1970s to 2012, is now over. Australia, however, has never had an exceptionalist view of its own world role. For Canberra, while China’s rise does stoke older fears and phobias about its geopolitical location, along with anxieties about actual and perceived threats to its sovereignty, the Australian government has not yet signaled a readiness to announce the death knell of engagement. It knows, even if it will not say so publicly, that its trading relationship with China will continue to be crucial on the other side of the coronavirus. So however much its current relations with China are mired in acrimony and mistrust, however much its prime minister lays down clear and necessary lines over what Australia will not tolerate in terms of Chinese interference in its politics, Canberra will find it difficult to align itself with a full-throated, U.S.-led policy of containing China, or even a stance of “strategic competition.” For all its preparedness to “push back” against a more hostile Beijing, Australia may be ultimately unable to deliver the kind of hard-line that some U.S. hawks in Congress and elsewhere clearly desire.

Where there is alignment, however, is on the respective debates amongst political elites in Washington and Canberra over China’s most recent, aggressive efforts to assert its international presence and personality. These include the way in which analysts, think-tankers and journalists in both countries have responded to Chinese unilateral land reclamation and intimidation in the South China Sea, Xi Jinping’s saber rattling and legislative change in Hong Kong, Beijing’s ongoing repression of the Uighurs in Xinjiang province and of course the ongoing fallout from China’s initial handling of the coronavirus, not least the tendency of a new generation of “wolf warrior” ambassadors to aggressively prosecute the party line on China’s response to the outbreak of the pandemic. Indeed, both the Australian and American debates over China had already reached a fever pitch before the globe went into lockdown. Much of this has been in response to clear Chinese provocation and assertiveness, not only in vital Asian waterways, but also its attempts to influence institutions and domestic politics in both countries. In Australia, some prominent defense and foreign policy commentators quickly endorsed the characterization of U.S.-China rivalry as a “new Cold War.” Although varying in their enthusiasm for the return of this conceptual framework to the parlance of international affairs—one analyst in Canberra warned of things “getting out of hand” if the Cold War moniker struck deep roots—there has nevertheless been a remarkable enthusiasm to reapply the labels of nearly half a century ago to the current geopolitical environment.

Even former Australian prime minister Kevin Rudd, one of the more astute China watchers in either country, concedes that we might be looking at “Cold War 1.5.” Indeed, in the Australian public debate more generally the rhetoric of the “China threat” has now morphed not only into a classic red scare but also something of a paranoid syndrome. Evidence of Chinese interference in Australian politics there most certainly is, but not on the scale which would suggest, to borrow the title of one of the more hysterical tracts on this subject, that the country is at risk of a “silent invasion.” Allowing for the periodic bouts of panicked agitation that have characterized Australia’s China discussion since 2016, the comments from some senior figures over the past twelve months have been extraordinary. Late last year, the former head of Australia’s domestic intelligence agency, Duncan Lewis, said publicly that the Chinese are readying to “take over” Australia, and that its people “might wake up one day and find decisions made in our country that are not in the interests of our country.” Ministers and officials, borrowing the language of the American wild west, talk openly of the need for “scalps” from the foreign interference legislation that was introduced by the government of Malcolm Turnbull in late 2017. It is worth recalling that at the height of the Cold War in the 1960s, Australians, like others in the Western world were often instructed, even if metaphorically, to beware “reds under the bed.” We are basically being told to look there again.

PARLIAMENTARIANS IN Canberra openly call for “political warfare” with China—one, a former Australian ambassador to Israel, suggesting that the government in Canberra ape Mossad and “take the fight” to the Chinese, “even if only to create effective deterrence.” Perhaps the most visible sign of Australian political activism on China is seen in the creation of a bipartisan group calling themselves the “Wolverines.” The formation of such a group mirrors developments in both the United States and Britain; in Washington, the reconvening of the Committee for the Present Danger; in London, the creation in the British parliament of a group of backbenchers calling themselves the “China Research Group.” More recently a global inter-parliamentary alliance has been formed to urge governments across the world to adopt a tougher stance on China. Canberra’s “wolverines” assert their preparedness to “speak out against China’s expanding power,” and take their name from the 1984 Hollywood film Red Dawn, in which high school jocks thwart a Soviet invasion of the United States. Membership of the group is now advertised by the appearance of wolf claw stickers on the entrances to their parliamentary suites. The U.S. ambassador to Australia, Arthur B. Culvahouse Jr., has recently accepted honorary membership of the group. Its most prominent member, backbench politician Andrew Hastie, a former special forces soldier, has labelled the West’s belief that an economically globalized China would politically liberalize as an “intellectual failure” akin to the French delusion that the Maginot line would withstand the Nazi advance in 1940.

What is being witnessed now in both Australia and the United States is a toxicity of views on China across three levels—security, economic, and now the unleashing of a pandemic—coalescing into one. First, there is the fear of an over-dependence on China for certain supply chains—indeed there are calls from the most hawkish voices in both countries to decouple from China economically, or at the very least to dramatically reduce their trade dependency on the middle kingdom. In the United States, the economic grievance towards Beijing has taken the form of a prolonged trade war; in Australia it has been manifest in growing calls to “diversify” its trading relationships more broadly across southeast Asia, and particularly with India. Second, there is the military fear of Xi’s strategic muscle-flexing in the South China Sea and his use of the Belt and Road initiative to push an expansionary vision of the “China model” or “China dream” for developing countries. Third, there is now the anger over the outbreak of a lethal virus in China that has spread worldwide, taken lives, upended livelihoods, and diminished economic prosperity. All of these anxieties in one way or another touch deeper chords in the respective strategic imaginations of both countries—most particularly the fear of Communist China they shared during the Cold War and which in that period cemented the strategic bond embodied in the ANZUS treaty, signed in September 1951.