Why Are U.S.-Sanctioned Airlines Still Flying to the Gulf States? 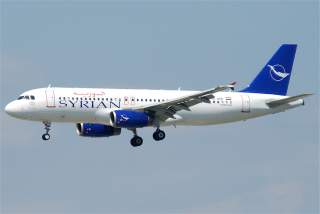 America’s Gulf allies are shooting themselves in the foot. While they strive to push back against Iran’s regional aggression and terrorist proxies, they are allowing operations by a Syrian airline that is part and parcel of Iran’s regional agenda. Every one of America’s Gulf allies – with the exceptions of Oman and Saudi Arabia – continues to host Syrian Arab Airlines, which is under U.S. counterterrorism sanctions for airlifting military supplies and personnel from Iran. Dubai has been particularly short-sighted, also hosting flights by Iran’s Mahan Airlines, which has an even worse record of mayhem in the region.

The Sunni-ruled Gulf states have plenty of reasons to be frustrated with President Obama’s policies on Syria and Iran, which they see as too accommodating. Their criticism would carry more weight, however, if they stopped letting in flights by Mahan and Syrian Arab Airlines, also known as Syrian Air. By so doing, they are missing an opportunity to safeguard the integrity of their financial systems, stand up to the Syrian regime’s butchery, and encourage a more active U.S. posture against Iran’s Islamic Revolutionary Guard Corps (IRGC).

In May 2013, the U.S. Treasury Department sanctioned Syrian Air on charges of providing a platform for the IRGC’s external arm, the Quds Force, to ship illicit arms and ammunition for the Syrian regime’s crackdown. These weapons included “mortars, small arms, rockets, and light anti-aircraft guns” and were shipped with the assistance of Hezbollah, Iran’s proxy in Lebanon and a key player in the Syrian war.

Despite these sanctions, Syrian Air has been permitted to fly to numerous Gulf countries, including not just Iran’s ally Iraq, but also to Bahrain, Kuwait, Qatar, and the United Arab Emirates’ three most important city-states (Abu Dhabi, Dubai, and Sharjah) just this month.

Allowing Syrian Air to land in their territory undermines some of those governments’ own stated policies on Iran and Syria.

In March, the Gulf Cooperation Council announced its decision to ban Hezbollah as a terrorist group (GCC member state Bahrain had already done so in 2013.) In his 2016 UN speech, the U.A.E.’s foreign minister called Iran a state sponsor of terrorism and denounced its terrorist proxies for the suffering they had caused in Syria. In May, it was reported that Kuwait instructed local financial institutions not to deal with any entity under U.S. or UN sanctions for links to Hezbollah or Iran.

These countries have also convicted individuals on charges of terrorist activity on behalf of Hezbollah and the IRGC.

In Kuwait, one such cell was caught last year with 42 thousand pounds of ammunition, 317 pounds of explosives, 68 weapons, and 204 grenades. Bahraini authorities expelled an Iranian diplomat after they allegedly disrupted a local cell with 1.5 tons of explosives and “strong connections to with the [IRGC] and Hezbollah.” Emirati prosecutors asserted in April that the IRGC had activated a Hezbollah sleeper cell in 2013, and in recent months several other defendants have been convicted in the Emirates on similar charges.

Remarkably, one of the aircraft that Dubai and Kuwait City have been hosting is leased to Syrian Air but actually belongs to another sanctioned airline, Iran’s Mahan Airlines. On the night of August 4, the old Airbus A306 (tail registration: EP-MNM) landed in Damascus, one of many weekly flights that Mahan operates to the Syrian capital. But this flight was different. Rather than returning to Tehran in the dead of night like it did many times before, the airplane was overhauled and transferred to Syrian Air.

The plane resumed its operations nine days later, with a Damascus-to-Dubai flight on August 13. Between then and October 21, it flew thirty times to Dubai and twenty times to Kuwait City, as well as to destinations in Sudan and Iraq. The U.A.E. even lets Mahan operate its own twice-daily flights to and from Dubai, despite the fact that the airline’s alleged violations exceed even the accusations leveled against Syrian Air.

Mahan has been under U.S. sanctions since 2011. Like Syrian Air, the charges against it include facilitating the shipment of personnel and arms into Syria for the IRGC’s Quds Force, as well as transporting “personnel, weapons, and goods on behalf of Hizballah.” The United States also declared that Mahan has facilitated covert travel in and out of Iraq for suspected Quds Force officers to aid sectarian militias. The most prominent Shi’ite militias in Iraq are designated by the U.A.E. as terrorists.

The airline also may be linked to weapons smuggling to Yemeni insurgents, where Emirati counterinsurgency forces have suffered some of the worst military casualties in their country’s history.

Several months after the Yemeni capital Sanaa fell to Iranian-backed Houthi rebels in September 2014, their ersatz government signed a memorandum of understanding with Iran allowing fourteen Yemen Airways flights and fourteen Mahan flights between the two countries per week. This made Mahan the first foreign airline into Sanaa after it fell to the rebels.

Soon afterwards, a spokesperson for the Saudi- and Emirati-led military intervention said “most” of the fourteen flights into Sanaa were used to smuggle arms and ammunition for the rebels. Days later, Saudi Arabia banned Mahan from crossing its airspace over unspecified “violations.”

Secretary of State John Kerry made similar suggestions in April of 2014 when asked whether Iran was arming the Houthis. He responded by pointing to “supplies that have been coming in from Iran” and said the U.S. was closely watching “a number of flights every single week that have been flying in.”

Hosting flights by Mahan Airlines into Dubai therefore conflicts with a number of Emirati policy priorities, even beyond Syria and Hezbollah. Furthermore, turning a blind eye to Mahan’s and Syrian Air’s abuses could also cause significant harm to these Gulf countries’ financial reputations.

Every year since 2013, additional companies with offices in the U.A.E. have been hit with U.S. counterterrorism sanctions on charges of acting as financial facilitators for Mahan or obscuring its commercial dealings. The airline stands accused of engaging in illicit financial activities such as smuggling funds, excluding key information from cargo or passenger manifests, bypassing security procedures, and using false invoices.

The line between Mahan’s illicit activities and routine business is blurry. Treasury noted earlier this year that Mahan “regularly uses the same aircraft it flies to Syria to fly commercial passenger routes to international destinations in Europe, the Middle East, and Asia.” And not only does Syrian Air allegedly engage in similar behaviors as Mahan, now it’s flying one of Mahan’s own planes throughout the region. Not only has this aircraft been in and out of Dubai, Kuwait, and Damascus this month, it has also flown to Abadan, which appears to be a key logistical hub for the IRGC’s Syrian airlift operation.

Acting Under Secretary for Terrorism and Financial Intelligence Adam Szubin has warned that his office would continue to expose Mahan’s front companies and remind governments and firms “that they risk exposure to U.S. sanctions.” Members of the Senate have called on the administration to take action in this regard immediately, including in the Persian Gulf.

Gulf rulers should recognize that the Obama administration, or more likely its successor, could also choose to enforce these sanctions against financial intermediaries for Syrian Air.

The consequences for those rulers could be particularly embarrassing, both for what such sanctions could suggest about the integrity of their financial systems and the consistency of their policies toward Hezbollah and the Iranian-backed slaughter in Syria.

For example, prominent travel agencies in Doha and Sharjah still advertise that they include Syrian Air among the many airlines for which they act as general sales agents. The precedent is also there, since a general cargo and sales agent for Mahan was sanctioned by the United States in 2013.

And it is not just the financial intermediaries for these airlines that could be at risk. Companies handling their cargo or providing ground services could be equally subject to U.S. sanctions if Treasury wished to enforce them.

Taking action against Mahan and Syrian Air could be a smart step for the Gulf states. It could be a simple way to pressure the IRGC’s Quds Force, Hezbollah, and the Assad regime. It also may be the only way to avoid embarrassing sanctions against local firms.

Dr. Ottolenghi and Dr. Weinberg are Senior Fellows at the Foundation for Defense of Democracies.