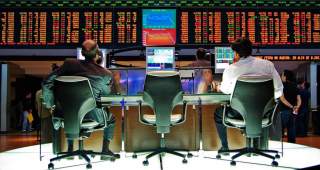 The 2013 “taper tantrum” saw billions of dollars wiped off Asia’s emerging markets as investors fled for safety. Worryingly for Asia, the region appears far from ready for the U.S. Federal Reserve’s next upward move in interest rates, which could come as early as mid-December.

The impact on the Far East of the Fed’s other significant decisions in recent years suggest another rate hike could place unwelcome pressure on Asian markets. The announcements of the first, second and third rounds of quantitative easing (QE) between 2009 and 2012 saw capital flood into Asian markets. While property values and currencies soared, each announcement brought diminishing returns.

However in 2013, when then Federal Reserve Chairman Ben Bernanke hinted in a congressional testimony that he was considering scaling back QE, billions of dollars were drained from Asian and emerging markets in what is now notoriously referred to as the “taper tantrum.”

And when the Fed announced its first rate hike in almost a decade in December 2015, despite being widely forewarned and despite the fact that it was a relatively insignificant 0.25 percentage point hike, Asian investors again hit the panic button. In China and Hong Kong in particular, companies which had gorged on U.S. dollar borrowings in recent years faced the prospect of inflated repayments, prompting their markets to plunge by double digits.

Even more concerning is that this exodus of capital and severe market losses occurred despite these economies anticipating the hike, cutting interest rates and weakening their currencies as a result.

The Asian Development Bank’s (ADB) latest “Asia Bond Monitor” highlighted the heightened threat posed to the region’s emerging markets by the monetary policies of the Fed, European Central Bank and Bank of Japan.

The ADB said the policies have complicated the economic climate in the region by “increasing the volatility of capital flows,” which can “jeopardize the financial stability of emerging Asian markets.”

These concerns were realized earlier this month when Boston Federal Reserve chairman Eric Rosengren stoked market fears of the Fed raising rates on September 20. While the hike never eventuated, Rosengren’s comments spooked investors from emerging markets, leading to 0.9 percent dip in the JP Morgan emerging market currency index, and a two per cent plunge in the FTSE emerging index, a gauge of emerging market stocks — its worst fall since Brexit.

While South America led the downwards charge, the Philippines, Taiwan and Malaysia were not far behind, with most of ASEAN and South Korea sharing the pain.

The outflow of capital, increases in the real value of U.S. dollar debt and crashing equity markets are not the only potential consequences for Asia. Commodity prices, particularly oil which is now more dependent on U.S. dollar fluctuations than actual consumption, will likely resume their downwards spiral.

With global commodities priced in U.S. dollars, a rise in the greenback lowers the cost of a given commodity. While iron ore is the least U.S. dollar driven, oil, base metals and gold would see immediate falls in value, which could further punish major regional commodity exporters like Indonesia, Malaysia and Mongolia.

But while there is little debate as to whether a Fed rate hike does more harm than good to the Asian economic region, some will do better than others.

For one, a hike would quite likely be welcome relief for Asia’s second-largest and most advanced economy, Japan. The yen has strengthened this year as investors sought its status as a safe haven in the extraordinarily volatile global economy.

Brexit, paired with concerns over the outcome of the U.S. presidential election in November, and instability in the Middle East and Europe have strengthened the yen and wounded Japanese exporters, with the Bank of Japan seemingly powerless to reverse the trend.

When Fed Chairwoman Janet Yellen said the case for a September rate hike had strengthened in late August, Japan’s benchmark Nikkei Stock Average of Tokyo stocks rallied by 2.3 percent and the yen weakened, providing welcome relief to its major exporters. This included carmaker Toyota, which had cut its operating profit forecast by $11.1 billion as the exchange rate pounded its margins.

As for the region as a whole, there is the argument that short-term pain will force overdue policy improvements across the continent. But whether Asia’s economic and policy leaders can successfully make these adjustments while capital pours out and equities plummet remains to be seen.

German economist Peter Tillmann suggests that India and Indonesia are particularly vulnerable to an “uncertainty shock,” with Asia’s emerging economies more prone than others to “policy spillovers.” With the Fed’s next key policy meeting on December 13-14, Asia could have more than the grinch to fear this Christmas.