Why Assad Must Go: Here's How to Do It 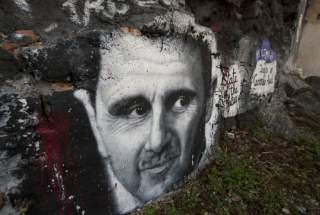 President Obama learned from his predecessor that decisiveness is not necessarily a virtue—yet an overly cautious approach to foreign policy challenges can also have regrettable national security consequences.

On Syria, President Obama has arguably erred on the side of acting too cautiously, contributing to a situation in which the most viable factions are radical Sunni Islamists on the one side and the equally irredeemable Syrian dictator Bashar al-Assad on the other.

President Obama has defended his ineffectual Syria policy in part by arguing that from the beginning, there were too few moderate and capable Syrian rebels to work with on the ground. Whether or not this is true, it is probably also self-fulfilling to a significant degree.

The moderate Syrian rebels who might have been willing to partner with the U.S. early in the civil war have been determined to eliminate Assad from power, but President Obama has been reticent to support this objective (at least overtly), probably due to his fear of the potential consequences to the Iran nuclear negotiations, among other regional security issues.

As a result, the moderates were effectively compelled to enter into a devil’s bargain with the radical Islamists in order to have any chance of accomplishing their overriding goal.

Attempting to do otherwise, they probably calculated, would have been futile or at best would have significantly increased their chances of being slaughtered by a quantitatively and qualitatively superior Syrian military.

Those who did not make this calculation are by now either dead, have withdrawn from the battlefield, or are hoping they will not be killed as a result of the indecisive geopolitical calculations of their American patrons.

Russia’s intervention in Syria raises the question of whether it will manage to save Assad or whether Putin’s perceived asset will turn out to be a liability, as Obama administration officials have stated they believe Putin will eventually conclude. Certainly Russian military operations have raised the risks of U.S. involvement in Syria.

Taking these risks into consideration, the Obama administration should increase its military aid to the moderate rebel factions in order to pressure Putin to jettison Assad.

If the Obama administration does not, it will likely find itself watching haplessly as the U.S.’ regional partners—Saudi Arabia, Turkey and Qatar, in particular—act unilaterally by supporting their own chosen factions, thereby exacerbating the sectarian dimension of the conflict.

This will reinforce the current dynamic that compels the moderates (from their perspective) to act in concert with the Islamist radicals.

Under the status quo, if this rebel coalition were to eventually succeed, the radicals would be in a much more advantageous position in a post-Assad Syria—to the detriment of all including Russia and Iran.

A stronger moderate element, in contrast, would have a better chance of eventually subduing its radical rivals once Assad were removed from power.

The Obama administration is therefore faced with a grim but seemingly clear choice: it can step back and allow Russia and Iran to unconditionally back Assad as he continues to slaughter his own people, or the administration can work to make these antagonists’ decisions costly enough that they will sooner rather than later decide that the wiser course of action would be to nudge Assad out of power or orchestrate a coup.

The U.S. should take precautions to prevent the downing of Russian aircraft in order to mitigate against the risk of direct military confrontation between Russia and the U.S. or one of its regional partners. The Obama administration should, however, significantly increase its supply of anti-tank weapons and other military equipment that could help level the playing field. Further, it should assist with targeting of Assad’s rotary- and fixed-wing aircraft in order to help drain his and Russia’s finances and demoralize his ground forces.

As a result of their extensive advisory missions, Russia and Iran should, over the coming months, have a clearer intelligence picture that will enable them to determine who would be best positioned to hold the state together in a post-Assad Syria. This leader should be able to command the allegiance of the Syrian military and should not be directly implicated in egregious human rights violations.

It will almost certainly not be possible to find a viable candidate with an unblemished record but this consideration will have to be weighed against the priority of stabilizing the Syrian state.

Perhaps Russia and Iran are correct: Assad may be the only one who can keep Syria together. More likely, however, they are simply not yet prepared to accept the risks of disavowing him.

Perhaps the Obama administration is right: there may not be enough moderates on the ground to mount a decisive challenge to Assad and the radical Islamists. More likely, however, many of the relative moderates are bandwagoning with the radicals in order to achieve their common objective, after which they will turn against each other.

It is in the interest of all parties to recognize that the sectarian dimension of this conflict is more likely to get worse with time and that they should pursue the common objective of positioning the moderates to come out on top. The longer the civil war burns, the fewer moderates will be found to put the pieces back together. A positive-sum solution should be devised while there is still time.