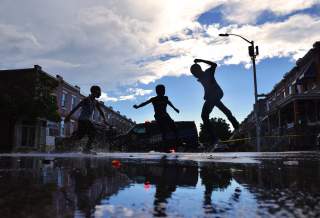 Baltimore’s streets are pockmarked with tragic and violent incidents. Shootings, stabbings and other cruel crimes sparked by rage, retaliation and opportunity mar the street corners and buildings of the city. Sometimes deflated balloons tied to a streetlight are the only small sign that someone was loved and lost, but their memory never truly left behind. Sometimes city developers bulldoze over the place where a person had their last spark of life or the location of an unsolved homicide as if their existence lost value in the face of commercial revenue.

The cycle moves quickly—so fast that it’s difficult to ascertain whether the crime itself is more horrific than the city’s ability to move on to other things.

Baltimore has endured many brutal events in 2017. In March, nineteen-year-old Shi-Heem Sholto and seventeen-year-old Tyrone James died during a firebombing in city’s eastern district. They were collateral damage, two unintended victims who happened to be at the wrong place at the wrong time. In June, thirty-seven-year-old Charmaine Wilson, the mother of eight kids, called police after her son was assaulted near her home in west Baltimore. She was gunned down in front of her children for reporting the crime.

“All of this ugliness is now showing up in our city because we’re separate from it,” community organizer Erricka Bridgeford shouted while she and other people formed a circle around the spot where twenty-four-year-old Lamontrey Tynes was fatally shot on Sargeant Street in southwest Baltimore on Saturday. “All of this ugliness is showing up in our city to show us some places that we are and some places that we need to heal.”

Bridgeford helped spearhead a large-scale effort to institute a three-day cease-fire in Baltimore. She and other supporters of the Baltimore Ceasefire movement prayed for Tynes, who was one of three people fatally shot over the weekend. They also prayed for his killer.

Five hours after Tynes was killed, thirty-seven-year-old Donte Johnson was gunned down on the other side of town. Several yellow markers sprawled across Gertrude Street in west Baltimore stood in contrast to the dark night and served as the tell-tale evidence of his demise. Johnson was killed just a block away from where Wilson was murdered for standing up for her kids.

Overall, by the time the sun had risen on Monday morning, seven people had been shot, bumping up the number of 2017 homicides to 211.

The statistics weren’t surprising. They weren’t any different from what the city sees on any other hot summer weekend. The atmosphere they generated among the public, however, had changed.

Many of Baltimore’s crime scenes contain the same elements day after day and night after night. If family members and friends are in the area at the time that a loved one has died, then they gather near the police investigation and mourn the loss of that life. More commonly, however, crime scenes attract bystanders in search of the latest gossip. Sometimes children play games down the street and ignore the crime-scene tape as it flutters in the wind. Sometimes the children play with the tape. Sometimes people blatantly ignore the investigation, duck under the tape and cut through the scene simply because it stands between them and the comforts of home or the one place in the neighborhood that that they can go to buy lottery tickets.

To see a circle of people praying around the place on the ground where a man they had never met had lost his life was a marked difference. It was the unexpected flash of light in a long, dark tunnel of cyclic mayhem.

Who knows when—or if—Baltimore will experience that type of powerful response again? Even if the community is able to sustain its effort to curb violence, that effort is not a good substitute for crime prevention, said Peter Moskos, an assistant professor at John Jay College of Criminal Justice and former Baltimore Police Department officer.

“Community efforts don't get to the murderers who are committing the murders,” Moskos said. “Almost by definition, Those who commit violent crimes are not in mainstream social networks, and won't be affected by community efforts to stop killing. I wish it were as simple as telling people to do the right thing, but at some point, especially in high-violence Baltimore, you need proactive policing that confronts those who are shooting people.”

“Asking people not to murder each other is never going to be an effective solution to the systemic problems of violence in Baltimore,” he said. “Of course it requires, in the long term, social change and improvement. But that could take years, decades or centuries. In the short-term we need to have proactive policing. The irony that bothers me, is that things were actually getting much better until the riots. Arrests were down, homicides were down, the population of Baltimore was increasing. That is the incremental improvement that the city needed to build on. Instead, it all went to hell.”

Is there a way out? On Friday evening, Corey Woodfolk, an ex-convict, was one of five representatives from Bates & Garcia who showed up to the Baltimore Ceasefire event on Belair Road to offer free legal services to city residents. Woodfolk has a paralegal degree and an advanced degree in business and corporate law from Blackstone Career Institute. He also has a certificate of readiness from the Hankamer School of Business.

“People like success,” Woodfolk said. “No matter who you are, they like the shiny things. They like that first, but when you show them that you can shine in business and you show them that they can do it . . . it gives them something else besides the street. Because if not, they’re going to do what they know how to do. They’re going to do what’s comfortable with them.”

But change won’t come overnight. And whether the three-day ceasefire was the quick gut-punch that the city needed to come to its senses or the first fist thrown in an eight-punch combination, its potential to be a success was made evident by the Saturday gathering on Sargeant Street.

Image: Children play in flash-flood waters as police investigate a July 2 shooting in the 2700 block of E. Chase Street.