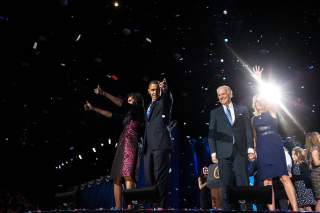 Barack Obama’s farewell address to the nation last night was both familiar and discordant. It was familiar because of the elevated rhetoric reminiscent of his 2008 campaign. It was discordant because of a fundamental disconnection from present reality.

The address was what his admirers have come to expect: a soaring speech that ties America’s founding principles to today’s challenges. He spoke of “a radical idea” that America’s founders put forward “to chase our individual dreams through our sweat, and toil, and imagination . . . to achieve a common good, a greater good.” He cited America’s founders as examples of compromise and equal treatment.

In a tribute to the American democratic way of life, he said—amidst some boos—that he would oversee an orderly transition of power to the incoming Trump administration, just as the Bush administration had done for him.

And his touching praise of his wife and daughters embodied what so many people admire about Barack Obama: he is an exemplary husband and father who has not let the altitude of high office distract him from his primary obligations.

But the speech was discordant in its notable detachment from current history. Donald Trump won the presidency during a period in which the president’s party has suffered troubling losses in state legislatures, governors’ mansions and Congress. Across the country, Americans have repeatedly rejected a progressive agenda they regard as more ideological than aspirational.

Americans want to know that their elected leaders care more about their upward mobility than fighting inequality. They want to know that elected officials are more preoccupied with their job prospects than with climate change. Progressives have repeatedly failed to track with the mainstream on these and other concerns, and voters have noticed.

President Obama’s call to a just economy in his speech last night only reinforced this incongruity. He called for “a new social compact to guarantee all our kids the education they need. To give workers the power to unionize for better wages. To update the social safety net to reflect the way we live now. And [to] make more reforms to the tax code so corporations and the individuals who reap the most from this new economy don’t avoid their obligations to the country that's made their very success possible.”

But the new social compact sounds too much like the old social compact that has characterized the Obama economy: an overly regulated marketplace in which workers lack either the skills for today’s economy or the proper incentives to find work in the first place.

Last month’s jobs report was an apt finale to the Obama era. Even as wages grew, job growth was lackluster in an economy that many working Americans sense is not especially great, even after years of recovery. There are ninety-five million people out of the workforce, even as job openings have outnumbered hires, and growth during the current expansion has been at its slowest rate since just after World War II.

During the Obama expansion, the number of people on food stamps has grown substantially, and too many Americans have found disability benefits more attractive than a job. The administration has had plenty of time to “update the social safety net” but has not made doing so much of a priority. There has been widespread agreement for some time that a serious skills mismatch is behind our troubling labor participation numbers, and yet the administration has been slow to adapt to this reality and give “our kids the education they need.” Meanwhile, regulatory interference has contributed to a marketplace in which fewer people work in new and small businesses, the traditional engines of job growth in America.

In short, there is too much sand in the gears of economic life in our country—and working Americans know it. Ironically, they seem to want hope and change, a new social compact indeed that differs markedly from the past eight years.

Ryan Streeter is Director of Domestic Policy Studies at the American Enterprise Institute. Before joining AEI, he was executive director of the Center for Politics and Governance at the University of Texas at Austin. Dr. Streeter has had a distinguished career in government service, which includes being deputy chief of staff for policy for Indiana Governor Mike Pence, special assistant for domestic policy to President George W. Bush at the White House, and policy adviser to Indianapolis Mayor Stephen Goldsmith. Outside of government, he has served as a senior fellow at the Legatum Institute and as a research fellow at the Hudson Institute.

Image: The Obamas and Bidens at President Obama’s farewell address in Chicago. Via White House Facebook