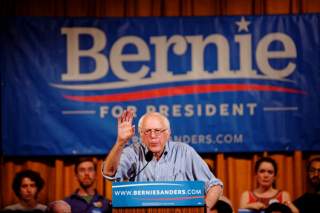 On May 12, David Wade—a man who knows quite a bit about electoral politics and what it takes to run a presidential campaign in the modern era—wrote a persuasive essay in Politico Magazine in which he argues that Sen. Bernie Sanders ought to drop his presidential aspirations and ride into the sunset. According to Wade, the senior communications strategist for John Kerry’s 2004 campaign and President Barack Obama’s 2008 campaign, the junior senator from Vermont is not doing himself or the Democratic Party any favors by staying in the race. In fact, his mere presence is not only dragging out what is otherwise Secretary Hillary Clinton’s inevitable clinching of the Democratic nomination but also is providing presumptive GOP nominee Donald Trump with the type of opposition research that has served as valuable blunt instruments in presidential campaigns ever since the founding of the Republic.

Wade has a good point. Mathematically speaking, it is only a matter of time before Hillary Clinton attains the 2,383 delegates she needs in order to formally claim the Democratic Party’s nomination. With 939 delegates yet to be awarded or decided, Clinton is essentially a shoe-in at this point in the race: at 2,293 delegates (according to the Bloomberg Politics tracker), Clinton is 96% of the way to the finish line. In order for Bernie Sanders to pull ahead of Secretary Clinton, he would need to perform a magic act of epic proportions, winning 850 of the 939 delegates still up for grabs. Sanders would only be able to pull this off by persuading a significant number of Clinton superdelegates to switch to his camp.

Diehard Bernie supporters who continue to attend his massive rallies on the trail may not want to admit it to themselves, but Sanders is a dead man walking. The Sanders campaign, as Wade writes in Politico, is in a “zombie” state of mind—going through the motions knowing full well that it’s at best highly unlikely the state of the race will change.

If common sense dictated the 2016 campaign, Wade’s argument would be well taken. Yet if there is anything at all we can say about this year’s election season, it’s that common sense and delegate math has been overshadowed by the passion and anger of the American electorate. The conventional rulebook, where the runner-up sees the handwriting on the wall and decides to call it quits in deference to party unity, has been thrown away.

Sanders and his advisers see the math. They know what is going on. No amount of political spin from the straight-faced Jeff Weaver or Tad Devine can make up for the fact that both of these men likely understand deep down that Bernie’s path to the nomination is about as visible as a stony trail under two feet of snow.

The reality of the situation though doesn’t seem to particularly matter to Bernie Sanders and his advisers. Bernie doesn’t think he owes Hillary Clinton anything, especially when the complaining comes from the Democratic establishment that he so viscerally despises. As he told MSNBC’s Andrea Mitchell “don’t moan to me about Hillary Clinton’s problems.”

To seasoned political observers, what Bernie Sanders is doing by staying in the Democratic primary is unnecessarily diverting Hillary Clinton’s attention and campaign war-chest away from a candidate in Donald Trump who has not only overcome all obstacles in his path but has made political pundits in America’s newspapers look foolish all year long.

Bernie and the 9.9 million people who voted for him perceive the situation in the exact opposite terms. What others see as a selfish candidate putting himself above the Democratic Party, Bernie sees as a genuine and principled insurgency to the Democratic machine. Every time the establishment argues for his departure, Bernie doubles down and declares boldly that he isn’t going anywhere. Sanders has used the spotlight of a national political campaign and transformed his run for the presidency into a vehicle for his pet projects, from exposing the inner workings of the Democratic National Committee to eliminating the aristocratic system where party elites have more power than the Average Joe who casts a ballot after work.

Hillary Clinton will win the nomination. But she and her campaign will need to grind it out until California votes on June 7. That means holding their noses for another three weeks and weathering a few more attacks about the evils of speaking to a roomful of Goldman Sachs executives. Bernie Sanders will only start campaigning on behalf of Hillary Clinton when he absolutely has to.