Why Biden Can’t Ease Up on Iran’s Revolutionary Guards 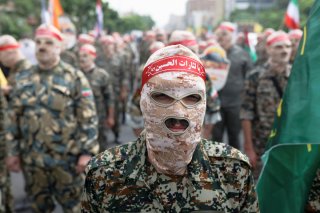 The White House announced on Wednesday that it was imposing new sanctions on an Iranian oil smuggling and money laundering network comprised of ten individuals and nine companies in several different countries. U.S. officials specifically alleged that the network’s operations were directed by the regime’s Islamic Revolutionary Guard Corps (IRGC) and that it also received substantial support from Russia, which is largely expected to rely more heavily on Iranian-style sanctions evasion in the face of extensive international sanctions related to the unprovoked Russian invasion of Ukraine.

Insofar as they target the IRGC, the new sanctions are arguably among the strongest indicators so far that the Biden administration intends to maintain or expand upon all existing pressure. The administration has previously faced criticism from various foreign allies and U.S. lawmakers, including some from the president’s own political party, for declining to rule out the prospect of removing the IRGC from the State Department’s list of foreign terrorist organizations.

This month, Canada canceled a planned friendly soccer match with the Iranian national team after a torrent of public criticism of the planned event. Critics claim that Tehran should be held accountable for the IRGC shooting down a passenger airliner in January 2020, which killed all 176 passengers aboard the plane.

The Iranian regime has imposed the demand for delisting during negotiations in Vienna, which aim to restore the 2015 Iran nuclear deal, formally known as the Joint Comprehensive Plan of Action (JCPOA). Tehran seemed to dig in its heels even further in March, after the negotiations were paused as a result of Russian demands that new sanctions on Moscow would not interfere with the prospective expansion of Russian trade relations with Iran. Russian officials later vaguely proclaimed that they had received the requested assurances, but the same pause persists to this day, with Iranian negotiators saying they will only return to Vienna in order to sign an agreement that reflects American capitulation to the demand for IRGC delisting.

The prospect of that signing has grown dimmer ever since, and some experts have since come to the conclusion that the Vienna negotiations and the JCPOA are effectively dead, though participating governments still refuse to accept them as such. Nevertheless, some American and European officials have recently shed their former optimism and begun to acknowledge that it is very unlikely, albeit not impossible, that the current impasse will be overcome.

This trend was once again evident on Wednesday when Rob Malley, the State Department’s special envoy for Iran, appeared before a hearing of the Senate Foreign Relations Committee and faced questions from lawmakers whose skepticism about a nuclear deal has been a matter of public record for months, if not years. Sen. Bob Menendez, the Democratic chair of that committee, declared it an “increasingly obvious reality” that there is no imminent return to a deal he considers “not in the U.S. strategic interests.”

Meanwhile, Malley himself stated that the prospect of re-implementing the JCPOA was “tenuous” and that the Biden administration was actively preparing for a situation in which the Vienna talks fail and the agreement is finally declared dead.

The latest assessments from the International Atomic Energy Agency now indicate that Iran has stockpiled ninety pounds of that material while still refusing to cooperate with inquiries into the origin and status of nuclear material that was found to have been present at three undeclared nuclear sites, including the Parchin military base.

That base returned to international headlines on Thursday when it was reported that an “accident” at a defense research unit had caused the death of an engineer. The incident is likely to raise new questions among Western policymakers about the nature of military projects currently being pursued inside the Iranian regime, as well as the limitations that would be imposed on the monitoring of those projects even if the JCPOA were re-implemented.

Tehran has a long history of portraying all U.S. sanctions as aggression against the Iranian people, despite the fact that there are carve-outs in those sanctions for trade in humanitarian goods. The regime’s narrative has seemingly been rejected by the public during a number of recent anti-government uprisings, one of which has been ongoing since food prices jumped by as much as 400 percent in early May. Among the slogans that define the uprisings is a chant that says the enemies of the Iranian people are inside the clerical regime and that “they are lying when they say it is America.” The leading opposition group, the National Council of Resistance of Iran (NCRI), has openly embraced the notion of expanded sanctions on the Iranian regime, arguing that an influx of foreign capital to the country would not reach the general public anyway.

The regime has been emboldened by the recent visit to Iran by Alena Douhan, the UN special rapporteur on unilateral coercive measures. Her report last week called for an end to sanctions on Iran after asserting that they impeded the enjoyment of human rights by Iranian citizens. But multiple human rights groups had warned in advance that Tehran would promote a self-serving narrative during her visit and would exploit a favorable conclusion to evade responsibility for the regime’s own systematic human rights violations. For nearly seventeen years, Iranian authorities have avoided requests for access to the country by UN special rapporteurs, only to finally extend an invitation to the one and only such individual whose defined mission is to interrogate the effects of foreign pressure on a given country.