Why Bloomberg Got It Wrong 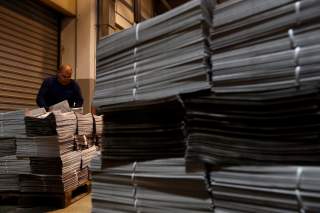 George Orwell was never overly impressed with the news media, which he considered often more interested in advancing preferred narratives than reporting the facts. Working for the organization that hosted Donald Trump’s first and only foreign-policy speech during the 2016 presidential campaign—and having considerable experience with the media since then—I can’t say that I’m all that impressed either.

Orwell’s tart assessment of the reaction of the British press’ response to the Spanish Civil War sounds somewhat familiar in an era when a new media cohort often seem to abandon their professional standards, at least if “Trump,” “Russia,” or both are in the headline. As Orwell noted,

Early in life I have noticed that no event is ever correctly reported in a newspaper, but in Spain, for the first time, I saw newspaper reports which did not bear any relation to the facts, not even the relationship which is implied in an ordinary lie. I saw great battles reported where there had been no fighting, and complete silence where hundreds of men had been killed. I saw troops who had fought bravely denounced as cowards and traitors, and others who had never seen a shot fired hailed as heroes of imaginary victories; and I saw newspapers in London retailing these lies and eager intellectuals building emotional superstructures over events that never happened. I saw, in fact, history being written not in terms of what happened but of what ought to have happened according to various “party lines.”

Today’s dominant “party lines” are likewise often shaping reporting to a greater extent than the facts. Yes, President Donald Trump went too far in branding the New York Times, CNN, and NBC News as “the enemy of the American people.” But it is no exaggeration to say that many reporters have become witting or unwitting enemies of truth.

Bloomberg reporters Caleb Melby and David Kocieniewski, who recently sought to insinuate the Center for the National Interest into their “party line,” are merely the latest example of this. While I understand that Melby, Kocieniewski and their co-author Gerry Smith spent weeks researching their story, they were unable to report anything other than the fact that presidential son-in-law Jared Kushner took part in an event in New York that some center board members and a center executive also attended. Is this what passes for news? Having come up short after speaking to several center board members, they ignored the facts and turned to twisted interpretations and innuendo to weave unrelated occurrences into a thoroughly false narrative. Their product is misleading and—one can fairly say—Orwellian.

How so? Consider the following sentence: “A partnership with the center would help catapult Kushner to his role as a key diplomat in the White House.” It is self-evident that what catapulted Kushner to a key role was his father-in-law’s campaign and election. The Center for the National Interest hosted Donald Trump as a public service, to provide a forum in which Trump could try to explain his foreign-policy perspective. Other think tanks were interested in hosting him; the center also invited Hillary Clinton. Indeed, just a month later, the Center for the National Interest presented Clinton’s eventual running mate Sen. Tim Kaine with its Distinguished Service Award. Many other Democratic and Republican politicians and senior officials have also spoken at the center, including then-National Security Advisor Susan Rice (who praised our bipartisan approach), current Secretary of Defense James Mattis (who approvingly quoted center President Dimitri K. Simes on the course that American foreign policy should follow), then-Secretary of Defense Ashton Carter, and Sens. John McCain and Rand Paul, to name only a few.

The authors are similarly misleading in stating that Kushner and a center executive “discussed the possibility of an event”—the Mayflower foreign-policy speech—without acknowledging that Kushner has testified that it was his idea and that the editor of the National Interest (which hosted the event) said the same in an earlier article in Politico that took a critical look at Trump. The center’s bipartisan board of directors, which includes top national-security officials and senior military commanders, fully endorsed hosting the event for a Republican frontrunner.

Melby, Kocieniewski and Smith are similarly misleading in their portrayal of the center’s very limited interaction with Maria Butina, now charged with acting as an unregistered lobbyist for Russian interests. Maria Butina was at a center event because she accompanied Alexander Torshin, a Deputy Governor of Russia’s Central Bank who spoke at the center in April 2015, to serve as his interpreter. While Mr. Torshin has since faced U.S. sanctions and Spanish money-laundering charges, we did not have access to any derogatory information about him at that time. Revealingly, the Bloomberg reporters don’t ask why two Obama administration officials met with Torshin and Butina; as senior officials, they could easily have had access to more information about the two.

When Torshin was at the center, he spoke about Russia’s banking sector to an audience that included a senior career State Department official covering the country. After hearing from others about Butina’s conduct following the center meeting, we took steps to prevent her from participating in any other center events and went so far as to advise staff members to avoid contact with her. What would Melby and Kocieniewski have had us do differently? Try to conduct background checks on foreign citizens accompanying foreign officials who speak at the center? Encourage our staff to spend time with Butina?

Bloomberg’s three reporters—or perhaps their editors—are also quite selective in describing the center as “Russia-Linked” in their headline. For the record, the Center for the National Interest does not have an office in Russia, does not have any Russian nationals among its past or present employees, and does not take contributions from Russia. Other American think tanks have done--or are doing--all these things. The only “link” the Center for the National Interest has to Russia is that its U.S.-Russia relations program, which I direct, invites speakers from Russia and occasionally sponsors unofficial dialogue—something that many others do as well. The center’s magazine, the National Interest, publishes contributors from Russia to help Americans understand Russian perspectives as a necessary precondition for effective policy in managing the many threats Russia presents. The National Interest’s website regularly posts articles taking a broad range of perspectives on Russia’s politics and policies, U.S.-Russia relations, and the Trump administration. The bottom line is that center and its staff have no “links” to Russia beyond the professional contacts that any specialists (including Moscow-based U.S. journalists) would try to develop to do their jobs.

What is most disturbing in Melby, Kocieniewski and Smith’s work is their description of center president Dimitri K. Simes as “Russian-born,” something they managed to include in the third paragraph of a twenty-paragraph article, which suggests that they consider it quite important. Attempting to exploit Simes’ heritage as a Soviet Jewish political refugee in this manner is beyond sleazy—it is despicable. Setting aside the fact that Simes came to the United States forty-five years ago, and has been a U.S. citizen for decades, it is also the case that former President Richard Nixon selected him as the founding president of a new institution then bearing Nixon’s name and that during the Obama administration two Defense Secretaries invited him to address the Defense Policy Board.  How would this language not be inflammatory if Simes had emigrated from any other country? Journalists elsewhere have been fired for this kind of race-baiting; many others lambasted Trump for his reference to an American judge as a Mexican. Will Bloomberg take responsibility for its reporters’ behavior? It is notable that while Bloomberg has a very talented columnist who emigrated from Russia much more recently than Simes, the firm’s web site does not describe him as “Russian-born.”

The real problem here is not one for the Center for the National Interest. We are doing just fine and will continue our work as we have for the last twenty-four years. The problem is that journalists like Melby, Kocieniewski and Smith are hollowing out the values that define us as a nation in their scramble to win eyeballs, and advertising revenue, for corporate media bosses who know that Trump plus Russia equals dollars. One of those values is respecting fellow citizens in our immigrant nation. Another is honoring the truth, even when it may not fit with your preconceived ideas or your preferred narrative.