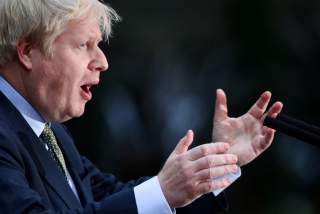 Does Boris Johnson’s stunning triumph presage a victory for Donald Trump in November 2020? Johnson rolled the dice, defied the odds and hit the jackpot with the biggest Tory victory since 1987, which was the year when Margaret Thatcher rolled to victory for a third term in office. Johnson’s true hero isn’t the Iron Lady, however, but Winston Churchill. Churchill was the subject of Johnson’s most recent book, The Churchill Factor: How One Man Made History. Now Johnson has made bold to follow in his footsteps by extricating the United Kingdom from the European Union.

At least one American who views the EU with disdain was elated by Johnson’s win. Donald Trump tweeted, “Congratulations to Boris Johnson on his great WIN! Britain and the United States will now be free to strike a massive new Trade Deal after BREXIT. This deal has the potential to be far bigger and more lucrative than any deal that could be made with the E.U. Celebrate Boris!” For Trump the most significant lesson may have been that Johnson was able, not to crack, but to smash the Labour Party’s so-called “Red Wall” in northern England. Just as Trump won in the Rust Belt states in 2016, so Johnson cruised to victory in working-class areas that supported Brexit and want to see a rebirth of their traditional industries. For Trump, it’s a sign that his strength in the Rust Belt was no fluke. These results should also fortify the resolve of Democrats who do not want to run a left-wing candidate, ala Jeremy Corbyn in 2020, and who are focused on regaining Wisconsin, Michigan, and Pennsylvania.

Trump is also chalking up a win with his China trade deal. Heading into the 2020 election, Trump had to able to demonstrate some progress to the Midwest farmers who have suffered a body blow during the trade war with Beijing. Trump tweeted, “We have agreed to a very large Phase One Deal with China. They have agreed to many structural changes and massive purchases of Agricultural Product, Energy, and Manufactured Goods, plus much more.” The tariff rate currently imposed upon Chinese wares will drop from 25 percent to 7.5 percent and a new round scheduled for December 15 will not be imposed. Had the December 15 round been enacted, the risk of a recession would have increased. China has reportedly committed to purchase $50 billion of American farm products next year and to stiffen its intellectual property laws. Together with the new trade deal with Mexico and Canada, Trump will be able to tout his deal-making prowess as he heads into the election.

Then there is impeachment. The House Judiciary Committee has passed two articles of impeachment, but Senator Mitch McConnell has already promised on Fox News that the trial will go nowhere. He explained to Sean Hannity, “Everything I do during this, I’m coordinating with the White House counsel. There will be no difference between the president’s position and our position as to how to handle this.” He added, “There’s no chance the president will be removed from office.” Zip, nada, zero. This isn’t surprising. The question will be whether McConnell, as astute a tactician as they come, will be able to minimize any political damage to Trump. Trump reportedly wants to turn the trial into a media circus, complete with testimony from Joe and Hunter Biden, but McConnell sees it differently. He wants to quash the entire episode as rapidly as possible so that it becomes a mere afterthought. So far, the GOP has assembled around Trump as steadfastly as a Roman Legion warding off invading tribes.

This perduring fealty to Trump has dumbfounded many NeverTrumpers. Writing in the Washington Post, Jennifer Rubin assesses impeachment and urges Democrats to work overtime to oust Trump. “The alternative,” she writes, “is unimaginable.” Actually, it isn’t. Much will depend on whom Democrats nominate to challenge Trump. But Trump appears to be on increasingly solid political terrain. If current trends continue, Trump may be on a firm path to re-election.