Why Catholicism Must Return to the Big Questions 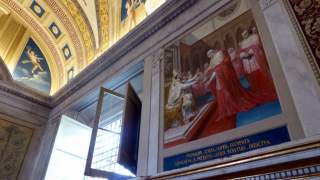 The Vatican Press Office is one of the newer departments of the Holy See, set up only a half century ago as the Catholic Church began to adapt to the age of instant, worldwide communication. Somehow it still found itself unprepared for the intense media reaction that came earlier this week, when a synod of bishops convened by Pope Francis released an initial report of its discussion on the Church’s pastoral approach to gay and divorced Christians. The subsequent spin from the blogosphere, in which both progressive and conservative outlets sought to portray a merely advisory document as a revolutionary upheaval—which depending on your prejudices is either a welcome development or a grievous blow to orthodoxy—might have been predicted by any competent PR agency.

Yet after the smoke clears and Church affairs recede back behind the front pages, a larger question remains: How does an institution once at the center of civilization effectively respond to a disenchanted public that, at least in the West, largely rejects the Church’s former role as the cornerstone of a universal, transcendent moral order?

Back to the Culture Wars

In first asking how to welcome gay and divorced members of the flock—when longstanding Church teaching calls for chastity and fidelity within traditional marriage—the bishops brought up issues that in recent years have marginalized conservative Christians, particularly in the United States, where same-sex marriage was universally prohibited as recently as a decade ago. Yet today in America, home to the world’s fourth-largest Catholic population, gay weddings are now legal in 30 states. So it should have not been a surprise that at least U.S. outlets would seize upon the Vatican report as yet another setback for conservatives still fighting a culture war.

In this myopic narrative, the battlefield had temporarily shifted from the typical domestic sites—the U.S. Supreme Court and sidewalks outside abortion clinics—to the papal palaces and colonnades of Rome. Perhaps, as the American Catholic writer George Weigel mockingly described a New York Times account of the synod, “the great Catholic cave in” to secular elites had finally come. The New Yorker called the report a “bombshell” and veteran Vatican reporter John Jarvis felt a “pastoral earthquake.”

Many conservatives had what Andrew Sullivan saw as a “collective breakdown” when faced with language from the report affirming that “Homosexuals have gifts and qualities to offer to the Christian community,” and asking “Are our communities capable of providing [a welcoming home], accepting and valuing their sexual orientation, without compromising Catholic doctrine on the family and matrimony?” This final qualifier and other reaffirmations that “unions between people of the same sex cannot be considered on the same footing as matrimony between man and woman,” were deemphasized, and the report became an irresistible opportunity for pundits to score the latest match between culture warriors.

In tallying or subtracting points, reporters often ignore questions about the nature of the playing field and the rules of the game. For example, some traditional Christians assume that they are already in the position of a visiting team with an unsympathetic referee, doomed to be an underdog for many seasons to come. Pope Benedict seemed to endorse this view, predicting a future church in which a much smaller membership “will have to start afresh more or less from the beginning. She will no longer be able to inhabit many of the edifices she built in prosperity …[and] will make much bigger demands on the initiative of her individual members.”

Many conservative Catholics have taken this vision as inspiration, forming more isolated, homogenous (and even residential) communes where there is no dissent on more difficult Church teachings. While most of these communities are not completely cut off from the larger society, they suggest less emphasis on grappling with the realities of modernity.

This potential turn inward, dubbed by some of the commentariat as the “Benedict option,” would represent somewhat of a reversal in posture from the 1960s, when the Second Vatican Council produced striking statements about the role of the Church in the modern world. (The meetings also notably resulted in allowing the formerly Latin mass to be celebrated in the vernacular, with more opportunities for participation of the laity.) In Pope Paul VI’s 1965 encyclical letter Gaudium et Spes, the Church declared that it “has always had the duty of scrutinizing the signs of the times and of interpreting them in the light of the Gospel. Thus, in language intelligible to each generation, she can respond to the perennial questions which men ask about this present life and the life to come, and about the relationship of the one to the other.” The letter calls for clergy and laity alike to “therefore recognize and understand the world in which we live, its explanations, its longings, and its often dramatic characteristics.”

Another important perspective comes from the philosopher Charles Taylor, who in 1996 produced one of the most cogent statements on the challenges faced by the Christian encounter with the present age. In “A Catholic Modernity,” originally presented as a lecture for an award given to prominent Catholic intellectuals, Taylor argues that any attempt to create a “modern Catholicism” would be “to chase a chimera.” The faithful must not fall into the smug assumption that their ancestors were simply backward, but must face the present world with humility, recognizing that “in modern, secularist culture there are mingled together both authentic developments of the gospel, of an incarnational mode of life, and also a closing off to God that negates the gospel.”

At the same time, Taylor is unapologetic when acknowledging that a return to a world ruled by Christendom, even if possible, would not be desirable. “There is something noble in the attempt” to “marry the faith with a form of culture and a mode of society.” But this was often accompanied by bloody conflicts and the denial of political standing to atheists, alien religions and homosexuals, costly and discriminatory practices that liberal society has shown that we are better off without. Unencumbered by the temptation to use political coercion, Taylor concludes, Christians may even be allowed “to live the gospel in a purer way, free of that continual and often bloody forcing of conscience which was the sin and blight of all those ‘Christian’ centuries.”

Taylor’s most important insight for the present debate among Church leaders, however, is a modern development that both Christians and secularists should be able to celebrate. Invoked in “A Catholic Modernity?” but extensively developed in his landmark Sources of the Self, is Taylor’s contention that early modernity is defined by “the affirmation of ordinary life.” In contrast to an earlier focus on the virtues of such elite activities as monastic contemplation or statesmanship, the modern period has been marked by an emphasis on the realities of everyday work and domestic life.

This turn to the ordinary has led to demands for greater egalitarianism in earthly institutions—a goal in conformity with the spirit of the gospel—but also conflicts with Christianity’s insistence on a positive role for suffering and the ultimate reward of eternal life. In modernity, the two ways of understanding must exist in tension with one another. As one of Taylor’s interpreters explains it, “Love of what is beyond life and love of life are bound together.”

As some in the present synod apparently attempt to change the pastoral tone toward persons who under past regimes of Christendom were unwelcome, they may gesture toward Taylor’s “affirmation of ordinary life”—including lives that are messy and, as with all of the faithful, fall short of important requirements of the gospel. If they can do so without discarding the transcendent, universal ideals of the Christian tradition, they will be doing the heavy lifting that modernity demands of them.

Despite an occasional tone deafness to the contemporary commentariat, the Church has succeeded in navigating the rough currents of history many times before. Those who wish her well should be optimistic that she will do so again.

Lewis McCrary is Robert Novak Journalism Fellow at the Fund for American Studies.