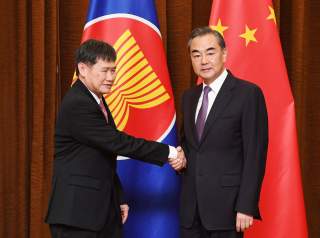 As the world gets acclimated to 2019, the South China Sea could very well be at the center of the new year’s most bare-knuckled negotiations. Talks between China and the ten-nation grouping of the Association of Southeast Asian Nations (ASEAN) over the Code of Conduct (CoC) in this strategically vital waterway will be (at best) an exercise in migraine-inducing frustration. Indeed, it could very well turn out to be an exercise in futility.

This, of course, would be an unfortunate outcome. Before Beijing began militarizing the area with anti-ship missile batteries on artificial islands and ramming fishing boats in order to assert dominance around contested reefs, the South China Sea was largely viewed as an issue that could be contained with informal understandings and good neighborliness. While territorial disputes between China, Malaysia, Brunei, the Philippians, and Vietnam were longstanding and often irreconcilable, the situation was not as escalatory as it has become over the preceding six years. Skirmishes and diplomatic finger-wagging were common, but China and ASEAN nevertheless recognized that stability was in the interest of everyone. A mechanism needed to be created that would resolve the competing claims once and for all.

This is precisely what the CoC was intended to achieve, an ambitious project that Southeast and East Asian nations committed themselves to after a 2002 meeting in Cambodia. As the non-binding declaration stated, “[t]he Parties concerned reaffirm that the adoption of a code of conduct in the South China Sea would further promote peace and stability in the region and agree to work, on the basis of consensus, towards the eventual attainment of this objective.”

Since that time, negotiations over a final CoC have been cumbersome and snail-like. Discussions produced little of anything until 2017, when China and ASEAN came to terms on a draft outline of what a code would look like. The agreement was merely a framework, the beginning of a bare foundation on which the rules would eventually rest. It took another fifteen months for the state’s respective delegations to arrive at a common understanding of the underlying text, which would theoretically include determinations on everything from how disputes would be resolved to how large of an area the code would cover. When an agreement on the draft was reached in August 2018, Chinese Foreign Minister Wang Yi was ecstatic. “It is like China and ASEAN countries building a house together,” the foreign minister said. “In the past, there were 11 designs from the 11 countries on what this house would look like. Now we have laid good groundwork for a single design of this house.”

The problem is that all of the claimant states have a different interpretation of how the house should be built. By virtue of their military power and economic dominance, the Chinese are by far the strongest party in the talks, and their negotiators are striking a hard bargain. According to public reports of the talks over the ensuing months, Beijing is lobbying to include provisions in the CoC that would prohibit regional countries from partnering with non-regional (i.e., U.S.) militaries in joint exercises unless all parties agree to the arrangement. This would provide China with a veto over the defense policies of their neighbors, a bureaucratically clever way to block the U.S. Navy from operating in an area the Chinese have long seen as an extension of their territory. The U.S. State Department has rightly objected to the Chinese suggestions, calling them abstruse to third-party states and an interference in the sovereign right of other nations to form their own defense relationships. Yet unless and until Beijing rescinds or compromises on this point, the entire negotiations over a CoC could fall apart over the one issue—sovereignty—that has made the South China Sea issue such a potent dilemma to being with.

China is not the only country with a hard line. Vietnam’s position on the CoC is the polar opposite of  Beijing’s. The Vietnamese are adamant that any code must explicitly condemn and make illegal the island-building campaign the Chinese have conducted over the previous few years, a demand Beijing will strenuously object to. In 2013, the Chinese set up an Air Defense Identification Zone over disputed waters with Japan in the East China Sea; the Vietnamese aim to prevent a similar zone from being adopted in the South China Sea, another collision with Beijing’s policy.

Then there are the competing claims from the Philippines, a country which has been far more friendly towards Beijing under the leadership of Rodrigo Duterte but not too friendly as to voluntary roll-over to China’s wishes.

A negotiation gets more difficult as more players participate. The more players at the table, the more positions are represented and the more interests are at stake. Talks over a code for the South China Sea have been going on periodically for two decades. Despite the positive spirit demonstrated by the parties last August, it’s highly unlikely the working level talks taking place throughout 2019 will result in a final agreement all eleven states can live with.