Why China Can't Sell Its 'One Country' Narrative 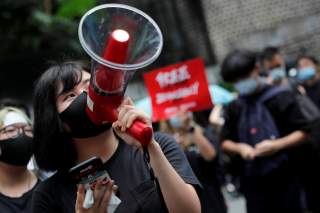 About two million residents took to the streets to protest subversion of their civil liberties. As a result, Hong Kong Chief Executive Carrie Lam shelved a reviled extradition bill and apologized profusely for misreading the public’s mood and promised to do better. And she very well may be able to do better—if she manages to keep her job. In the end, Beijing’s rulers backed off and let local citizens have their way.

From afar it looked as though Hong Kong’s democratic forces, who struggled to preserve their rights and a fair legal system, were victorious despite determined opposition from a supine local government backed by China’s Communist Party. But appearances can be deceiving, and it’s unlikely that there were any true victors. Hong Kong’s pro-democratic groups may have won a skirmish in their battle for more substantive self-rule, but the long-term trend is still against them. In the process, the obeisant Hong Kong government was further discredited—leaving Lam’s political future uncertain—while the reputation of Beijing’s “people’s government” was further tarnished when once again it made clear that it doesn’t much care for the people’s opinion when it comes to politics.

For now, there will be a relative pause. With intensifying trade negotiations between Presidents Xi Jinping and Donald Trump under way, Beijing wants to damp down overseas criticism of its human-rights record—and letting Hong Kong simmer meets that goal. Likewise, Lam’s administration, having botched the extradition law, has said that it won’t revive the matter before October, if then. Sporadic pro-democracy demonstrations are continuing, but none will match the disruptive mass marches of past weeks.

Some background may be helpful.

When Hong Kong returned to Chinese sovereignty in 1997, after 150 years as a British colony, it was promised “a high degree of autonomy” for fifty years, even though it came under Beijing’s rule. This allowed it to negotiate nonpolitical agreements with national governments and international organizations on many topics. (Some result from the 1992 Hong Kong Policy Act that let Washington sign pacts on such diverse matters as civil aviation and money laundering.) As a result, some of Hong Kong’s international agreements allow for the extradition of accused criminals on an ad hoc basis to twenty other jurisdictions (including the United States). This extradition clause meets United Nations guidelines on due process and fair trials. However, the clause does not apply to China because, while Hong Kong retains an independent legal system based on British common law, mainland justice too often reflects whatever the Communist Party finds convenient on any given day. Because of that difference, the 1997 handover terms deliberately excluded an extradition agreement.

An appalling murder case in Taiwan this year changed all that. A young Hong Kong man took his girlfriend there for a Valentine’s Day holiday. After a noisy row in their hotel room, he allegedly strangled her and deposited her body in a pink suitcase near a rail station before flying home. Hong Kong authorities could not try him for a murder committed elsewhere, but he was jailed for money laundering (he used her stolen credit card). Initially, Taiwan asked that he be sent back for trial despite the absence of a formal extradition agreement.

The case prompted Chief Executive Lam to draft and try to rush through new legislation, with little debate, that would let Hong Kong extradite accused criminals to some 170 other jurisdictions, including any part of the People’s Republic of China—which includes Macao and, by Beijing’s definition, the “renegade province” of Taiwan. She claimed, falsely, that this would “close a loophole” in the 1997 handover agreement, even though the matter had been purposely omitted. Taiwan immediately said it didn’t want the suspect returned if it meant acknowledging, however indirectly, that the island is in fact part of the People’s Republic of China.

But it was the proposed law’s other aspects that brought Hong Kong people onto the streets. Its final terms covered thirty-seven specific crimes (down from an original forty-six) involving possible jail terms of seven or more years, none of them to be political or common commercial crimes. But Hong Kong legal specialists and others weren’t mollified for they knew China often fabricated charges. For example, when a Hong Kong retailer of gossipy books about Beijing leaders was illegally seized and hustled across the border by mainland cops, he wasn’t accused of libel or political wrongdoing; the charges stemmed from a mainland traffic accident from ten years earlier.

Moreover, other clauses allowed for the seizing and freezing of assets of Hong Kongers who have been accused of corruption and certain other business crimes in China if conviction could bring at least two years (not seven) in prison. And the terms would apply to anyone physically in Hong Kong whom mainland authorities wanted—local citizens, foreign residents (including some seventy thousand American and three hundred thousand Canadian passport holders) and even casual tourists passing through. Thus, behind the scenes pressure from some leading tycoons, such as insurance executive Bernard Chan, helped persuade the administration to shelve the bill at least temporarily.

Finally, the Hong Kong courts could have no say over whether an accused person was to be shipped across the border to face Chinese justice; a prima facie case would do. As long as extradition forms were filled out correctly, a Hong Kong magistrate had to sign off and could not weigh the validity of any documents or witness statements used to justify transfer. Many Hong Kong citizens suspect the Taiwan case was merely Lam’s rationale for making it easier for her Beijing superiors to pick off the local dissidents they wanted to jail, though she claims otherwise.

The potential danger to civil liberties in all this brought forth the million or more marchers from all parts of Hong Kong society. Pro-democracy activists and other critics of Chinese Communist Party and government policies feared they might face bogus charges for alleged mainland crimes and be shipped across the border. Doing business in China often involves slipping backhanders to local officials; both Hong Kong and foreign businessmen suddenly realized that past instances could be revived as current charges and cause them to face extradition, even though the case might be prompted by a current business dispute. Moreover, many saw the extradition issue as just the latest example of an ongoing effort to curtail Hong Kong’s political space, this time with active help from the Lam administration.

So they took to the streets in massive numbers; an estimated one-fourth of the city’s entire population took part in the protests. After some equivocating and crossing the border to meet unidentified Chinese officials in neighboring Shenzhen, Lam shelved the extradition bill but insisted that it should be revived later in some form. Government and protest leaders continue to make contrasting claims about alleged violence by the other side, and calls for Lam’s resignation continue. Smaller demonstrations continue, with talk of an annual July 1 protest gaining momentum. This counter-demonstration would be held during an official ceremony celebrating the 1997 handover. But Hong Kong is relatively calm and another massive protest sometime soon is unlikely. But nothing has been settled.

Ever since President Xi gained power in 2012, China has grown increasingly intolerant of dissent and Hong Kong—with its British legal heritage—is a continuing source of trouble. Economic and other internal pressures make officials determined to suppress any sign of social unrest on the mainland, and they fear that Hong Kong’s relatively liberal ways might prove contagious if they seeped across the border. China has already reneged on promises to enhance Hong Kong autonomy and almost certainly wants new restrictions. Beijing may not want to make it “just another Chinese city”—its separate system provides important financial services, especially for wealthy mainlanders with family or other ties to those at the top—but it does want to restrict localism. An increasing percentage of its residents already consider themselves to be first of all Hong Kongers, not citizens of the People’s Republic of China, and that rankles.

In the meantime, Lam’s political future is in doubt. A career civil servant from modest origins, she gained the senior government post when her predecessor became the third consecutive chief executive to leave office under a cloud—a sad comment on governance under Beijing’s oversight. She insists that she will not heed public calls for her resignation, and that some form of extradition law is necessary, perhaps mainly because Chinese officials want one. But Beijing cannot be pleased with her performance since less maladroit handling of the issue could have minimized her protest problem. Yet replacing her would be surrendering to public opinion, not a Beijing habit, though keeping her guarantees a degree of continued unrest.

However, blocking the extradition bill was no permanent victory for pro-democracy forces, who want the full self-government Beijing promised back in 1997 and has subverted ever since. Polls say that Lam is the least popular government leader since the 1997 handover, but political activists have no mechanism for replacing her. Also, Lam does have continued backing from pro-Beijing organizations, notably business executives who support almost anything China wants rather than risk retaliation against their mainland commercial interests. (In Hong Kong, Communists and capitalists are often allied against expanded democracy.) This leaves few effective political tools for those who seek greater political autonomy and continued reliance on an independent legal system. The erosion of their political rights may well continue. Already the Lam administration has denied seats to some elected pro-democracy Legislative Council members for dubious reasons and prevented others from becoming candidates.