Why China Is Ready for Rodrigo Duterte 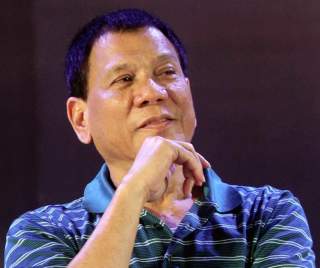 A paradoxical mixture of glee and foreboding has taken hold among Western strategists as the world awaits the judgment of the Hague tribunal ruling on the South China Sea case brought by Manila against Beijing. Into this witch’s brew of obvious conflict precursors, including but not limited to escalating great-power rivalry, nationalism and resource competition, one must now factor in the Donald Trump of Asia-Pacific politics, Philippine president-elect Rodrigo Duterte, inaugurated at the end of June.

He has already turned more than a few heads in Washington, not only with his extreme statements about law and order and with his misgivings about alleged U.S. intelligence activities in the Philippines, but more particularly with respect to his suggestion that he would negotiate directly with Beijing on the difficult question of conflicting claims in the South China Sea. That would constitute a nearly 180-degree course correction from his predecessor’s confrontational approach toward China. Indeed, on May 16, Duterte held a friendly consultation in Davao with China’s ambassador to the Philippines, Zhao Jianhua.

Needless to say, Beijing is studying the evolution of the political climate in Washington and also Manila with some degree of optimism. In fact, Chinese scholarship has been working meticulously and with the utmost seriousness to fully divine the nature of the long love-hate relationship that constitutes U.S.-Philippine relations. For example, as I discuss in my 2015 book, myriad studies have been published in the last decade in the Chinese language that examine the details of America’s colonial administration of the Philippines. Not surprisingly, the Chinese military has also taken more than a passing interest in this relationship and this edition of Dragon Eye will summarize the findings of two Chinese military scholars from the Marine Academy (海军陆战学院) in Guangzhou.

Their “Analysis of the Appropriate Scope of the ‘U.S.-Philippines Mutual Defense Treaty’” was published in a PLA journal in December 2015 and funded as a “National Social Science Fund Project” (国家社科基金项目). True, the journal where it was published is not the PLA’s most prestigious journal, but on the other hand, Guangzhou (headquarters of the southern theater command) is likely where China’s South China Sea contingency plans are developed, so the piece might be worth a look at after all.

Of course, the analysis begins with the obligatory statement that the Spratlys and nearby sea areas fall under the “incontestable sovereignty of China.” The point is made predictably that Manila is seeking “solid backing” (坚实后盾) for its maritime claims, but that Washington’s so-called “vague policy” (模糊政策) has created a predicament in which the U.S.-Philippines Mutual Defense Treaty itself has become an “important bargaining chip” in the evolving South China Sea situation. There is no great surprise to learn that the authors’ main thesis is to argue that the scope of the “treaty does not necessarily cover the Spratly Islands” (并不明确表明条约是否适用于南沙群岛).

This effort will not attempt to parse all the twists in the Chinese legal argument here—and there are several—except to say that the line of reasoning seems to rest on the assertion that the Philippines’ borders were generally set by the 1898 treaty between the United States and Spain. The PLA authors assert, moreover, that Philippine claims were only truly asserted over the course of the 1970s. Since the U.S.-Philippines Defense Treaty of 1951 predates those claims, say the authors, “. . . there is no way [the treaty] can cover the Spratly Islands.”

The discussion takes an interesting twist when these Chinese military analysts delve into 1970s-era declassified U.S. archival documents published in the Foreign Relations of the United States collection, which is cited numerous times in this article. For example, they quote at length a memo dating from 1976 from then national security advisor Brent Scowcroft, stating that the United States must preserve “flexibility” with regard to the Mutual Defense Treaty, and stating that the U.S. commitment should “neither be expanded, nor truncated” so that “we can . . . avoid major risks” (不会曾加也不会缩小… 我们避免…带来的重大风险). According to this Chinese analysis, Secretary of State Henry Kissinger said about the same time, in response to pleas from Manila, that the mutual defense pact would cover Philippine sovereign territory without any problem, but that “we are worried about getting dragged into a military conflict because of Philippine actions at Reed Bank and in the Spratly Islands” (我们担忧会因菲律宾在礼乐滩和南沙群岛的行动而被拖入军事冲突). Significantly, a scholar from the Philippines who writes frequently on this site does not appear to dispute these historical interpretations regarding the significance of the Mutual Defense Treaty.

Ultimately, these PLA authors conclude that Washington is unlikely to “clearly express that the ‘Philippines-U.S. Mutual Defense Treaty’ applies to the Spratly Islands . . . assuming unnecessary risk.” As evidence for the expected cautious U.S. approach, they cite both the April 2012 Scarborough Shoal incident, as well as President Obama’s April 2014 “refusal to clearly answer” (拒绝明确回答) questions regarding a hypothetical armed clash between China and the Philippines in the South China Sea while on a visit to the Philippines. They suggest that if the United States did actually take such a step to clarify its stance on the Spratlys, this could lead “directly” to armed conflict in the South China Sea.

To be sure, it is sobering to consider that these Chinese military planners may fundamentally misread the mood in Washington, where it seems many strategists are eager to paint red lines over the next reef. “No more Scarboroughs,” goes the common refrain. Indeed, the many hawks of the Washington “blob” are sure to argue for the supposed “imperative” to clarify Washington’s vague policy with respect to the Philippine mutual-defense pact that apparently dates back to the 1970s.

However, that would be unwise for numerous reasons, including the troubling possibility that good insurance policies can actually encourage arsonists, figuratively speaking. Related to the tricky three-way risk calculus at issue here, there are also the slowly but steadily shifting military balance, irrational yet nevertheless highly potent nationalism in Beijing and, most importantly, the ample scope for compromise in these maritime disputes that remains disappointingly unexplored, especially given China’s solid record of bilateral dispute resolution. Could it be that the “rogue” Duterte understands these issues better than most American strategists? Perhaps he is seeking a “win-win-win,” as an alternative to the “lose-lose-lose” of militarized rivalry that will only benefit military contractors and bellicose nationalists. This is not to even mention the grave, absurd and yet ever more real possibility of actual military conflict between nuclear-armed great powers over rocks.