Why China Thinks It Can Build a Utopian World Order 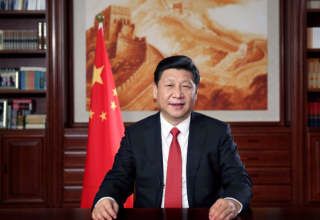 Nobel laureate Rudyard Kipling argued in “The White Man’s Burden” that it is the moral responsibility of the superior white race to occupy lands populated by people who are “half-devil and half child” and to rule over them for their own good. He implied that the purpose of Western colonialism and U.S. imperialism was not to amass wealth and power, but rather, to civilize savages and lead them in the process of building a grand society. Similarly, the Chinese regime has taken upon itself the burden of guiding the whole world in the process of jointly achieving a prosperous, harmonious and unified order. The fundamental difference is that Chinese intentions are mostly genuine. Beijing believes that its superior civilization provides the leadership with the necessary skills to lead mankind in the process of building a utopian world order, known by Chinese since ancient times as Tianxia.

A widely accepted translation of Tianxia is “all under the heaven,” referring to the union of all the lands and peoples on earth. It is worthwhile to note that historically, the gods did not appoint Chinese emperors to rule just over a limited region of the world such as the Central Kingdom, but over Tianxia, over all the lands and peoples under the heaven. Hence, uniting the whole Chinese Empire would result in its frontiers overlapping “the limits of the Universe,” i.e. the whole earth. Additionally, for the full establishment of Tianxia, the emperors had to achieve “a universal agreement in the hearts of all people,” a common identity, and a global institution to grant “universal order.” For this reason, Chinese emperors were fixated with achieving unity – territorial, political, social, cultural unity – to turn the chaotic world into the utopian Tianxia.

Following in the steps of Chinese emperors, the Communist Party aspires to unite its peoples and the international community under the umbrella of a common world order. It envisions a united world governed by a global institution responsible for promoting a set of common values that are inclusive of all existing cultures but prevent any one of them from becoming dominant. This would result in “internal harmony within diversity,” where “individual interests are so interlocking and mutually constituted that anyone’s gain will always result in a gain for others.” Moreover, China argues that given the failure of Western approaches to global governance due to their cultural, religious and economically imperialistic tendencies, the Tianxia system offers the “best blueprint for world politics in the future.”

The contemporary version of the Tianxia concept was first introduced to the world in the form of a slogan for the Beijing Olympics in 2008: One Dream One World. A world united by common objectives and values. Liu Qi, president of the Beijing Olympics Organizing Committee, explained that One Dream One World “conveys the noble ideal of people in Beijing as well as in China to share their civilization and create a bright future hand in hand with people from the rest of the world." Ancient Chinese civilization should guide mankind to the “bright future” that Tianxia represents. These lofty intentions are also part of President Xi’s “Chinese Dream,” which argues that the Chinese civilization and nation will be the guide and engine leading international society along a prosperous path. This will fulfill mankind’s dream of establishing a “peaceful and bright world” along with humanity’s happiness.

China is more eager than ever to show the world that it is capable of being a responsible and accountable global leader that can, in President Xi words, build an “international community with a shared destiny for mankind.” For this purpose, during the eighth summit of the G-20 in 2013, Beijing introduced “China’s plan.” With it, the Chinese foreign minister argued, China would contribute more of its wisdom and guidance to build a peaceful, prosperous and harmonious world together with other nations. And China is walking the talk by launching a number of global initiatives aimed at achieving a “bright future for all,” the most prominent of which is the Belt and Road Initiative (BRI).

Under the headline “Vision and Actions on Jointly Building Belt and Road,” the BRI is described as “harmonious and inclusive,” an initiative that

advocates tolerance among civilizations, respects the paths and modes of development chosen by different countries, and supports dialogues among different civilizations on the principles of seeking common ground while shelving differences and drawing on each other's strengths, so that all countries can coexist in peace for common prosperity.

The constructive and global nature of the BRI is continuously emphasized in the Chinese media with statements and headlines such as, the BRI is “a key contribution to world stability, equality” and “Connecting the World Through Belt & Road.” More significantly, China argues that it is capable of finding globally beneficial answers to the complex challenges that the world is facing.

The BRI is not just a massive economic initiative, it is a model of global relations and governance. It is the Chinese roadmap to achieving a united Tianxia, to make One World One Dream a reality. It is the physical evidence that China is taking on its historical burden of leading mankind in building a united, harmonious and prosperous world for all. Or so China claims.