Why China Is Winning the 5G War 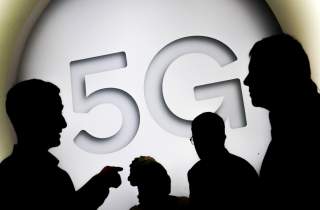 There is little doubt today that American superiority in the next generation of mobile communications, commonly called 5G, is a matter of extraordinary national concern. There is also little doubt that China is a strong competitor, already having outspent the United States by $24 billion and planning $411 billion in 5G investment over the next decade. The Chinese government has also laid out multiple national plans for establishing the country as a leader in mobile technology, and the Chinese firm Huawei is poised to be the top smartphone manufacturer by 2020.

And what are United States companies doing about this? Bickering over patents.

For years, the leading American supplier of advanced mobile communications chips has been the San Diego-based Qualcomm. The company has been an innovator of mobile technology, but it has also been a remarkable innovator of convoluted legal strategies. As an ongoing Federal Trade Commission lawsuit alleges, Qualcomm has used its dominant position as a chip supplier and its extensive patent holdings to weave an intricate web of patent licensing across the mobile industry. The effect of that complex licensing scheme, the FTC claims, has been to force competitor chipmakers out of the market and to extract concessions and high patent royalties from smartphone and mobile-device makers.

Qualcomm today faces only one major U.S. competitor—Intel, whose chips Apple recently started using instead of Qualcomm’s. Not surprisingly, Qualcomm has leveraged its patents to force a retaliatory investigation against Apple, the effect of which could be, as an administrative judge recently determined, to boot Intel out of the mobile-chip market and leave Qualcomm as a monopoly.

It is hard to imagine that this infighting among Apple, Intel and Qualcomm is getting the United States very far in 5G, and it is harder to imagine that Qualcomm’s desired outcome would do so, either. The best path, instead, is the obvious one: allowing competition and expanding the number of firms working on 5G.

Competition encourages companies to out-innovate each other in order to grab market share. Of particular importance to 5G, competition leads to better cybersecurity in products, making them less vulnerable to hacking or misuse.

Competition is especially crucial when it comes to the technical standards that define how 5G works. These standards are the work of 3GPP, an international consortium of technology companies in the field. Chinese players such as Huawei and ZTE are major participants in 3GPP. Ensuring that 3GPP’s standards reflect American values requires having as many American companies at the negotiating table as possible—which is harder to achieve when those companies are trying to sue each other out of business.

Certainly patents themselves, as rewards for new inventions, are a driver of innovation in areas such as 5G. The problem, though, is not the existence of a patent system but the ever-expanding power of the patent laws, which encourage companies to pour dollars into complex patent licensing and assertion schemes—as companies like Qualcomm have done—rather than to perform the hard work of building new technologies. When innovation in patent strategy is more profitable than actual innovation, we lose the race to 5G and other technologies.

But don’t take my word for it. Multiple members of Congress, from both sides of the aisle, have denounced the use of patents to kick companies like Intel out of 5G development, predicting that such actions would “dampen the quality, innovation, competitive pricing, and in this case the preservation of a strong U.S. presence in the development of 5G and thus the national security of the United States.”

Or look to what China itself is doing. The Chinese government is handing out rewards left and right to encourage technology research and development. Indeed, it grants subsidies and financial benefits (ranging from the ordinary to the imperfect to the bizarre) to encourage its citizens to file for patents. But while China specifically encourages filing for patents, it does little to encourage using them: Patent infringement awards in court are peanuts—often only five figures—and most Chinese patent owners drop their patents within five years of getting them. The message in China is clear: You will be rewarded for innovating, but not for quibbling over patents.

The United States should take the same tack if it wants to match China in 5G. Ever-stronger patent rights encourage counterproductive disputes that are a drag on industry, a drag on research and development, and ultimately a drag on domestic competitiveness on the global stage. If America wants to lead in 5G, then it must clear the path for strong competition among leading American technology companies.

Charles Duan is the Director of Technology and Innovation at the R Street Institute.