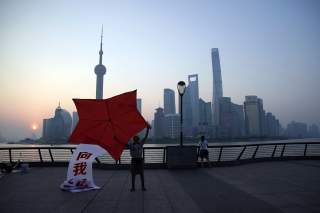 Despite the furor they’ve caused, the revelations this month that North Korea has functioning ICBMs and miniaturized nuclear warheads shouldn’t come as a surprise. The foreign-policy community has watched for years as Kim Jong-un has steadily developed more advanced weapons capabilities. While most of the world has come together to constrain Kim’s nuclear ambitions, the sophistication of his weapons programs has continued to accelerate. Even before U.S. sources seemingly confirmed Kim had miniaturized nuclear devices, the United Nations Security Council answered this month’s ICBM tests with what U.S. Ambassador to the UN Nikki Haley called “the strongest sanctions ever imposed in response to a ballistic missile test.”

Sanctions may still be the best way to resolve this challenge without force of arms, but whether this latest package proves effective will depend on the factor that has undermined previous sanctions—North Korea’s continuing trade links with Chinese companies and banks, which account for nearly all of its economic activity. The subversion of multilateral sanctions and international security is the most urgent, but it is far from the only way that Chinese commercial entities act against U.S. interests, with the acquiescence—or support—of their government. Government-linked Chinese businesses have also chipped away at our economic future through tactics including intellectual-property theft, cyber-economic espionage and violations of China’s World Trade Organization commitments.

Earlier this year, I convened a congressional hearing on China’s activities in high-tech sectors. Robert Atkinson, president of the Information Technology and Innovation Foundation, testified that “[t]he emerging challenge now is about the Chinese Government enacting a suite of policies to go after the U.S. leadership in our core advanced technologies.” He warned Congress that it should “consider a world where in fifteen years, U.S. technology jobs in industries like aerospace, chemicals, computers, motor vehicles, medical equipment, pharmaceuticals, software, semiconductors, are drastically reduced from where they are today.”

China’s commercial activities have incurred little cost despite violating international norms to advance this agenda. The United States should begin to impose such costs. Recent reports have indicated that the Trump administration is considering trade actions against these malign actors, a welcome development. Reciprocity in the U.S.-China commercial relationship is long overdue.

A United Nations Panel of Experts, the Center for Advanced Defense Studies, and others have documented extensive links between Chinese commercial entities and the North Korean regime in violation of both U.S. sanctions law and multilateral UN resolutions. Overall trade between China and North Korea has continued to rise throughout 2017, suggesting that China is unwilling to use coercion against its client state. The goods that cross the China-North Korea border frequently violate sanctions. Kim Jong-un has abundant access to luxury items, for example, that should be banned under sanctions, including a modified Mercedes-Benz S600 limousine and a Princess 95MY yacht.

Multiple public reports have revealed that China’s largest telecommunications firm, Huawei, has been subpoenaed by the Commerce Department as part of an ongoing investigation into whether it broke U.S. export control laws by exporting or re-exporting U.S. technology to North Korea. Also, earlier this year, a similar Chinese government-affiliated firm, ZTE, was hit with a record-breaking, billion-dollar fine in connection with export violations to Iran and North Korea. Huawei and ZTE were the subject of a House Intelligence Committee investigation in 2012. The Committee’s report documents the companies’ links to the Chinese government and found them to be national-security threats.

These notable cases are just a few of the multitude of Chinese businesses operating, with government links or government acquiescence, without regard to North Korea’s nuclear belligerence. The Trump administration has taken a good first step to address these malefactors. On June 29, the Treasury Department’s Office of Foreign Assets Control sanctioned a Chinese company and two Chinese individuals that were closely connected to North Korea’s nuclear and ballistic weapons programs, pursuant to its secondary sanctions authority. The department’s Financial Crimes Enforcement Network also designated the Chinese Bank of Dandong as a “primary money laundering concern,” cutting it off from the U.S. financial system.

The administration must place secondary sanctions on the multitude of similar Chinese entities that have grown accustomed to violating UN and U.S. sanctions with the acquiescence of their government. The only other time they were applied to the Kim regime’s Chinese enablers, in 2005, secondary sanctions were successful in drawing North Korea to the negotiating table. We may be able to replicate this success and convince Beijing that propping up Kim isn’t worth it, but half-measures aren’t going to cut it. Secondary sanctions must be fully implemented.

At the same time, the United States should continue to develop further policies to counteract Chinese businesses that degrade U.S. national and economic security. For example, the United States is set to begin developing the new 5G mobile network, which will be the communications backbone of our increasingly connected society. If companies like Huawei and ZTE can insert themselves and their products into the 5G marketplace, they will be able to gain a crucial foothold in the United States, reducing our ability to punish their wrongdoings, and undermining U.S. national security and diplomatic goals. Companies that ignore U.S. sanctions and export controls are security threats, yet Huawei and ZTE have a visible presence in the United States. Their actions may be grounds to block them from our market entirely by designating them under sanctions authorities.

The House of Representatives also took a promising step forward in July, approving an amendment to the Fiscal Year 2018 National Defense Authorization Act that would require the director of national intelligence to develop a list of telecommunications and telecommunications equipment contractors that knowingly assisted or facilitated a cyberattack by or on behalf of North Korea. The amendment would bar the Department of Defense from doing businesses with these telecommunications companies. The amendment should be accepted by the Senate and sent for President Trump’s signature.

The Chinese Communist Party (CCP), which holds political power in the country above the government bureaucracy, is deeply embedded in the business community. Companies in China have internal Party committees. At state-owned enterprises, the party chief is usually the chairman of the board. Even in private companies, which are seen as more independent, the influence of party committees is strong. “[P]rivate sector party committees are . . . expected to help propel the companies’ growth” and ensure “the enforcement of government policies.”

But in early 2017, the Commission on the Theft of American Intellectual Property found that China remained the world’s principal source of IP theft, which costs the U.S. economy as much as $600 billion annually, not including the cost of patent infringement. It is difficult to believe that China cannot reign in its cyber criminals when it maintains a tight enough grip on its internet to eliminate Winnie the Pooh for a perceived slight. In certain cases, it appears that Chinese military hackers have worked hand-in-glove with Chinese companies to rob American businesses.

A revealing example is the Chinese government’s plan to dominate the semiconductor industry. The United States remains the world’s semiconductor industry leader, with the majority of global market share. After over a decade of failing to advance its domestic semiconductor industry, China promulgated official “IC (Integrated Circuit) Promotion Guidelines,” in 2014, which have been operationalized by a $150 billion public-private fund to subsidize investment, acquisitions, and the purchase of new semiconductor technology. Observers say the fund is designed to “[p]rop up indigenous businesses with subsidies, flood global markets with supply, and undercut the competition.”

According to an Obama administration expert panel, China has also undertaken so-called “Zero-Sum Tactics” in the semiconductor space, including forcing or encouraging customers to buy only from Chinese semiconductor suppliers, forcing technology transfer in exchange for access to the Chinese market, stealing intellectual property and colluding with other Chinese companies to lower the value of takeover targets before purchasing them in distressed situations. The Berlin-based Mercator Institute for China Studies has observed that “almost all of the large semiconductor enterprises in the United States have received investment offers from Chinese state actors.”