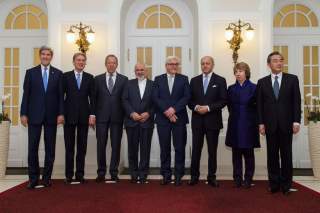 A clear-headed assessment of the P5+1-Iran nuclear negotiations over the course of 2014 would be hard-pressed to make the case that things are looking up. Let’s face it, even the best case scenario of the P5+1 at this point is a far cry from what they were demanding of Iran only a short while ago. Instead of squarely confronting Iran with the evidence of its cheating and deception per its NPT commitment not to work on a military capability, and insisting on massive dismantlement of Iran’s nuclear infrastructure because Iran cannot be trusted, the international negotiators have limited themselves to a deal that they hope will physically keep Iran twelve months away from the ability to break out to its first nuclear device. And this is gift wrapped in the message that after a certain amount of time, Iran will be able to fully resume its nuclear activities, and even significantly expand its nuclear program. This set-up dangerously ignores the fact that there is absolutely no indication that Iran has backed away from the military aspirations that the United States, its European allies and many other states are quite certain that Iran harbors.

Even with regard to this limited and certainly not comprehensive goal, things are not going well. Iran has refused to budge from its insistence on maintaining its quick breakout capability, so if it has agreed to anything at all with regard to P5+1 demands, it is the absolute minimum, and nothing that would undermine this capability. In fact, over the past year, Iran has been very vocal about everything it will not do: it will not dismantle centrifuges, nor will it close problematic facilities; indeed, Iran wants to significantly expand its nuclear program. Iran refuses to discuss the weaponization activities it is suspected of having carried out, and it has been stonewalling on the requests of the IAEA in this regard. Iran blatantly ignored an August 25 deadline that the IAEA set for Iran to answer only two to three questions on its list. Iran also refuses to discuss its vast ballistic-missile program, because according to Iran, these delivery mechanisms are “non-nuclear.”

Over the course of 2014, Iranian leaders, especially the supreme leader, have continued to insult the United States, and accuse it of setting unrealistic and humiliating demands. The Iranians have demonstrated on a regular basis their utter contempt and disdain for their major interlocutor in the nuclear talks. Khamenei set forth the red lines for the Iranian negotiators on his twitter feed—they boil down to Iran remaining steadfast on all issues.

In the face of this intransigent Iranian stance, it is the P5+1 that have been making offers of concessions and softening their demands. They have accepted that Iran will continue to enrich uranium and are no longer insisting on closing down Fordow and Arak. They refuse to press Iran on weaponization, even though this is their strongest card for demanding dismantlement of Iran’s program. The United States in particular is projecting an eagerness for a deal that is undermining its leverage at the bargaining table. Iran has no reason not to remain defiant while holding out for more concessions, because it has learned that this tactic works. If there is a deal by late June 2015, it will most likely reflect even greater P5+1 concessions, with Iran remaining a dangerous threshold state.

Within this very problematic dynamic, Congress is working on new legislation to impose more sanctions on Iran if a deal is not reached by late June, and another bill that would require the administration to submit a pending deal with Iran to Congress for hearings and a vote. The goal of Congress is to keep the pressure on Iran, as the only means of possibly “convincing” this dangerous proliferator to adhere to the P5+1 demands. But President Obama has said he will veto the legislation, just like he threatened last year. At that time, even facing the president’s charge that they are “warmongers,” Senators acquiesced to Obama’s request to first give diplomacy a chance. The president assured them that if the talks did not produce a deal, he would be the first to come to Congress to ask for their help in imposing new sanctions. But even though the talks did not produce a deal—and things are going badly at the table—the president has not only not come asking for help, but he has once again castigated Senators for supporting the new sanctions legislation. This time he has accused them of following the narrow interests of their donors, while declaring that they will be directly responsible for the breakdown of negotiations, and for opening the door for everyone to blame the United States for this development.

It is difficult to believe that these statements are being made in earnest—because if the P5+1–Iran negotiations break down, it will be because of Iran, the dangerous and defiant proliferator that has barely budged, not only over the past twelve months, but over the past twelve years. It will be the fault of Iran’s harsh and uncompromising leadership, who has no interest in a deal that would undermine Iran’s ability to move to nuclear weapons at a time of its choosing. And if the upshot of twelve years of negotiations with Iran is a bad nuclear deal, it will be the fault of the international negotiators that were unable to convey to Iran the firm message that they had no intention of backing down from their legitimate demands, or of acquiescing to Iran’s nuclear threshold status; the same negotiators that went so far as to try to blame Congress for their own failings and shortcomings.