Why Conservatives Are Being Blacklisted 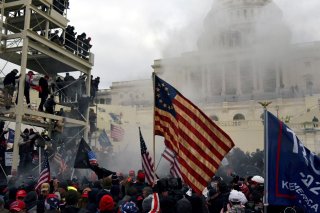 A specter is haunting conservatism—the specter of a Progressive blacklist that seeks to expunge the Right. A string of President Donald Trump’s online accounts blocked or restricted his access following the deadly U.S. Capitol siege last week because of escalated fears that he may incite additional insurrection—what conservatives are calling the “progressive purge.” Since last Wednesday’s turmoil at the U.S. Capitol, Twitter has booted Trump from its platform, Facebook and YouTube suspended the president, and any Right-leaning Twitter accounts who championed a pro-Trump stance have either seen a drastic decrease in followers or have been kicked off the platform. Cautions about hiring Trump administration officials are also brewing.

“A grand experiment begins: we killed spiritual leaders abroad for inciting terror even when they were citizens (trivia question: who legally authorized that?) and it worked so well we should bring counterterror home,” Samuel Moyn, author and professor of law and history at Yale University, sarcastically tweeted Thursday, in response to CNN national security analyst Juliette Kayyem’s remarks about the “tactical response” to bring about “total isolation of the president of the United States” through impeachment, the 25th Amendment and deplatforming.

Kayyem did not mince her words in her effort to launch a Maoist-style Cultural Revolution in America itself. “Trump is the spiritual, but I will also say operational leader, of this domestic terrorism effort. He tells them where to go. He tells them what to do. He tells them why they’re angry. And so, we need to start at the top, like any counterterrorism effort, which is total isolation of the president of the United States: impeachment, yes. 25th Amendment, yes. Deplatforming, yes. All of the above. No money, no access to campaign funds. Complete isolation,” Kayyem said.

Republican lawmakers who objected to the certification of the 2020 electoral vote will also suffer from the “isolation” effort, as dozens of U.S. companies announced that they would terminate donations to anti-certifiers, including Verizon, AT&T, Amazon, American Express, Marriott, and Disney. “The Amazon PAC gives to congressional candidates on a bipartisan basis based upon the interest of our customers and our employees,” an Amazon spokesperson told CNN. “Given the unacceptable attempt to undermine a legitimate democratic process, the Amazon PAC has suspended contributions to any Member of Congress who voted to override the results of the US Presidential election. We intend to discuss our concerns directly with those Members we have previously supported and will evaluate their responses as we consider future PAC contributions.”

147 members of the GOP voted against the certification of the electoral college vote count last week.

“The media, big tech and corporate America are all in on this,” Independent Women’s Forum policy analyst Kelsey Bolar told Fox News’s “Fox & Friends.” “It is a very dangerous and concerning trend. It is not going to unite the country. It is going to divide us.” Donald Trump Jr. urged Elon Musk to brainstorm a new social media platform for his father to use to communicate with his following due to Twitter’s “bias” and “one-way targeted” censorship.

Another forty companies have decided to just suspend PAC contributions, like Coca-Cola, Citigroup, Deloitte, and Google. A number of conservatives labeled the initiative as the “reign of terror” and “blacklist.” The virtual clear-out has forced Trump and his supporters to seek online shelter elsewhere, with Parler functioning as the most popular “free speech app” to convene following Trump’s election defeat, as more than two million people continued to sign up for the platform each day. But while Parler promised “free expression without violence and no censorship,” the app has been slapped with a number of anti-free speech accusations as progressive users tried to bombard the virtual circle but were banned. Parler itself may face parlous times.

“This is Big Tech declaring war on the conservative movement and on the concept of free speech,” Dan Gainor, vice president for the conservative Media Research Center’s TechWatch, declared. “What’s rippled from there is that corporate America is following Big Tech’s lead and embracing woke capitalism instead of freedom.” Gainor went on to blame major media outlets for the magnitude of the revolution of removing Trump and his followers.

Randall Lane, chief content officer and editor at Forbes, alerted readers that companies that hire Trump administration officials would be blacklisted, writing, “everything your company or firm talks about is a lie.” In response to the remarks, Steve Forbes, head of Forbes Media, slammed Lane and compared the current political climate to the 1950s era when people were unemployed and shamed for backing communism. “This is reminiscent of what we had in the 1950s during the McCarthy era where there were blacklists, the Hollywood 10,” Forbes told “Fox & Friends.” “People were denied work because of their political beliefs, and there are other dark periods in our American history. We’re not going to blacklist and the like.”

Several Republicans have claimed hypocrisy on the enterprise since Democrats endorsed Black Lives Matter protests, as some party members were reluctant to explicitly condemn the group’s related violence that threatened the safety of Americans across the country. “Democrats can raise bail for rioters and looters this summer, but somehow when Republicans condemn all the violence, the violence this summer, the violence last week, somehow we’re wrong,” Rep. Jim Jordan (R-Ohio) said on the House floor during the impeachment debate Wednesday.

“This is not just an attack on free speech,” Family Research Council President Tony Perkins told the Washington Times. “This is an attack on an entire movement of people with the intent of driving them underground—keeping them from getting jobs, having legal representation, and even cutting them off from legitimate financial transactions.” For now, it shows no signs of ending. Quite the contrary.