Why Containing China Is Easier Said Than Done 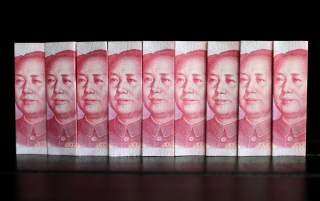 What does Mike Pence’s recent speech on China signal about the future of U.S. foreign policy toward Beijing? On its face, the vice president’s speech at the Hudson Institute was a harsh rebuke to the leaders of America’s nearest geopolitical competitor. Pence took the Chinese to task on issues ranging from trade and investment to industrial espionage and human rights. But his speech was conspicuously short on detail, suggesting that the administration has not yet mastered the practicalities of translating harsh rhetoric on China into a meaningful, effective, and enduring foreign policy.

In some respects, the combative tone of Pence’s speech was to be expected. The Trump administration has used the language of “competition” several times before, not least of all in the National Defense Strategy and National Security Strategy documents. Last month, the United States imposed sanctions on China as punishment for purchasing military equipment from Russia. And with the United States and China openly engaged in on-and-off cyberwarfare and an escalating trade dispute, it would have been surprising if Pence had not upbraided the Chinese.

Nevertheless, Pence’s remarks were important because they constituted the most recent articulation of the administration’s vision for U.S.-China relations. China’s leaders were taking careful note and will have found little by way of reassurance. Pence offered Beijing nothing regarding an off-ramp from the spiraling trade war, for example. And as Harry Kazianis has pointed out, there is no hope of a joint U.S.-China approach toward North Korea so long as the United States doubles down on the demonization and pseudo-containment of China.

Of course, past presidents such as Bill Clinton and George W. Bush also began their presidencies by promising harder lines on China but ended up reversing direction in response to international and domestic pressures. Can Trump buck this trend by putting in place a truly robust reaction to China’s growing power in East Asia and beyond? Will historians look back on Pence’s harsh words as the opening salvo in a new cold war?

Much depends on what the Trump administration ultimately has to offer. For although it was heavy on rhetoric, Pence’s speech was noticeably light on detail. As a result, we still don’t know exactly how the administration intends to assert itself vis-à-vis China. Pence’s call for “a relationship grounded in fairness, reciprocity, and respect for sovereignty” leaves a lot of room for interpretation. Bilateral trade deals with regional partners, new international development and finance programs, and increased scrutiny of Chinese investment into the United States were all touted as bold measures designed to curb Chinese influence. But these works-in-progress hardly amount to a programmatic response to a significant geopolitical rival.

In part, this might be because the Trump administration is still split on the question of China, with relatively dovish officials willing to tolerate hardline rhetoric on China but reluctant to approve tangible moves toward military balancing. This would make sense, given that Trump’s foreign-policy team is known to be divided on other major foreign-policy issues such as Syria and Iran. While economic advisers such as Peter Navarro and Robert Lighthizer have managed to win bureaucratic battles in favor of a trade war with China, Secretary of Defense James Mattis seems more eager to find a modus vivendi with his counterparts in Beijing.

Even if the administration was united in favor of a more energetic response to China, however, it is not clear that the broader U.S. political system—namely, Congress and the voting public—would back an activist policy in East Asia. It is nearly thirty years since America organized its foreign and domestic policies toward the end of containing a foreign rival, and few believe that the country is ready to pay for anything close to the cost containment would take. Even Trump’s limited trade war has been a difficult sell. Would a militaristic response be more popular?

To be sure, appetite appears to be growing for expanded competition with China—in Congress, at least, even if not among the public at large. Republican legislators seem particularly keen to brandish their anti-China credentials. Earlier this year, Marco Rubio introduced the Fair Trade with China Enforcement Act, which called for economic sanctions against China, and Ted Cruz introduced a bill to investigate China’s imprisonment of political dissidents. Combined with the (bipartisan) opposition that exists to Chinese trade practices and Beijing’s record on human rights, there is at least the possibility of a possible coalition to support a hard line against China.

But if the Trump administration’s approach to China is to morph from combative rhetoric to concrete strategy, it will require buy-in from much more than a disparate coalition of anti-China groups. A real and enduring domestic consensus will have to be established. In the Cold War, a shared vision of U.S. power and purpose united decisionmakers in the bureaucracy, Congress, military, and civil society. For forty years, most Americans remained willing to spend blood and treasure to defeat the Soviet Union because they viewed core national interests as being at stake. Nothing even resembling this commitment exists in the United States today.

This is for a good reason. The truth is that the Chinese threat to U.S. national security pales in comparison to that posed by the Soviet Union. When push comes to shove, Americans and their leaders realize this basic geopolitical reality. And so while the politics of opposing China will surely be around for some time to come—nobody can dispute that there are votes to be gained in stoking animus against China—it is unlikely to produce much more than the sort of harsh rhetoric and unconnected (and un-strategic) foreign policies that are already on offer.

The effects of rising anti-China sentiment will be real: a cold, unproductive, and potentially dangerous to the bilateral relationship between the world’s two most important powers. But they will be muted—at least for now. It would take a massive shift in domestic opinion or an equally dramatic international crisis to jolt America into accepting anything more drastic than this.