Why the Coronavirus Forces Us to Question Our Illusion of Control 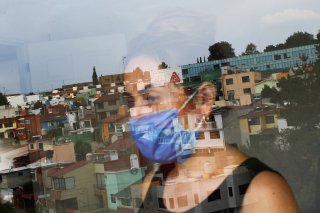 On February 24, three weeks before Harvard closed its doors amid the pandemic, James Comey came to the Kennedy School of Government. When asked for advice on how “to prioritize integrity and truth over partisanship,” he told the students: “Know that you will die someday.” That unexpected answer sparked some giggles in the audience.

Things get worn out, people die, and the most sophisticated civilizations vanish with time. We know it, and it is inevitable. Yet, death often comes as a surprise, in our lives or in a conversation.

The false blessing pursued by western modernity is to scarcely think about mortality, keep it out of our lives as much as possible. This big amnesia finds in big data and high life expectancy a most favorable ground. A large amount of information and options, as well as seemingly endless occupations, easily erode our existential urge. When memory fades, some sense of spiritual commitment and collective belonging disappears along with it.

James Comey’s memento mori remark did not come out of nowhere. He believes in the virtue of living memory. During his tenure at the FBI, he required “all new agents and analysts to study the FBI’s interaction with Dr. Martin Luther King, Jr., and to visit his memorial in Washington as part of their training.” He wanted the institution to remember its mistakes and learn from them.

The memory of our shared vulnerability helps us to build stronger communities that are less polarized and less divided.

Pope Francis recently observed that the lack of memory is at the core of the elite’s scorn. When people are in power or any kind of privileged position—even the disciples of Jesus—they might forget they belong to the people (la memoria della propria appartenenza a un popolo) and start despising them. They come to understand their situation of authority as an entitlement instead of an obligation to serve, as a fair reward for what must be their inner superiority. They control.

We can usually afford to entertain ourselves in the illusion of total control. But not now. A virus has knocked our open and fast-paced world to a sudden halt and is still hammering it down. The vulnerability shock we received has a compelling temporal dimension, more than any past global crisis we knew in the wake of bubble bursts or terrorist attacks. This time, it looks like a medieval plague—only spreading faster—striking us back to a state of collective vulnerability and fear we thought belonged to anthropological museums.

Individually, lockdowns and curfews also bring us back in time, keeping most of us at home. Like grounded children for whom the fun is over, we are taught how to carefully wash our hands. And wild animals were seen wandering back in our deserted cities.

After domesticating life, we thought we could tame death. Technology would not only help us but save us, and artificial intelligence would uplift the globe. Kaspersky claimed it was here to “save the world.” The Russian company sells anti-virus, yes, but not the ones we need the most right now.

In the United States, Silicon Valley seems to have relinquished any attempt to acknowledge that suffering and death (as expressed in the biblical expression “valley of tears”) are part of life. The mission statement of Calico, a Google lab launched in 2013, is “Tackling aging, one of life’s greatest mysteries.” The next step of this transhumanist pursuit is to make death obsolete, a goal explicitly shared by Peter Thiel, an investor and Paypal co-founder.

Considering our lifespan as a source for wisdom, as Seneca the Younger suggested in De Brevitate Vitæ, is not part of the business model. Most ancient philosophers considered death as an inducement to lead good lives rather than a bad thing per se. Philosophy traditionally helps you to think and live your life in the light of death. You must prepare for death before preparing for life.

However, it would be unfair to artificially set the bad techno gurus against the good philosophers. The latter sometimes conceive god-like projects of their own, utterly misleading and bound to fail.

Friedrich Nietzsche’s demiurge, the Übermensch, depicted a new kind of a man rising above humanity—an “overman.” But far from his overarching philosophy, Nietzsche went through numerous emotional breakdowns and lived his last decade in a growing catatonic state. Later, his self-creating man model was utilized by the Nazi propaganda.

Illness, childhood, old age, all states of dependence, or deprivations are manifestations of our vulnerability that Alasdair MacIntyre wishes not to forget. The Scottish philosopher is critical of Aristotle’s megalopsychos—a virtuous demiurge—and deems that “our form of life is such that coping with the vulnerabilities of others, and of ourselves, is one of the central tasks that confront us.”

In our oddest state of both emergency and slowdown, while taking care of the most vulnerable ones, there is an opportunity to really understand how fragile we all are. With the coronavirus, the “memento mori” is louder than a mere whisper in our triumphant civilization’s ear. Yet, bent by our problem-solving mindset, the risk is to focus in the past for explanations and, in the aftermath, for ways to thrive.

The present signs are calling us to bear in mind our vulnerability and mortality, for our common good. Improving our living conditions should not lead us to forget the human condition. And some mysteries are better embraced than tackled.