Why the Coronavirus May Create Healthcare Rationing in America 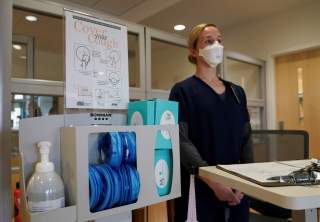 Kavita Patel: They are as prepared as they could be without really understanding the full breadth and depth of what the necessities will be. Certainly in New York City, you’re seeing a very different conversation at hospitals than you are seeing in places like Fort Worth, Texas. The conversations with the two specific hospitals that I’m having are about whether there are protocols in place to get our algorithms out to all the staff. However, the hospital in Fort Worth, Texas doesn’t have any hospitalized cases, and the hospital in New York City has over one hundred. So there is a very different level of preparedness depending on where you are in the surge.

The other piece about whether hospitals are prepared is the level of anxiety that this is creating. I think that almost everybody, at all staffing levels, including outpatient doctors such as myself, are getting anxious because there is so much unknown about how easy this virus is to transmit, how hard it is to recover, and whether there might be “a treatment online” from the pharmaceutical companies that doing trials right now.

Heilbrunn: In other words, a huge amount of uncertainty surrounds the virus itself.

Patel: Correct. This is the first time ever that all the major science journals are releasing their paywalls, much like most of the contemporary magazines and newspapers are for coronavirus. That is being done to facilitate the sharing of breaking research in the form of letters and journal articles. Each day I do a refresh on JAMA (Journal of the American Medical Association) and new research is emerging constantly. For example, yesterday, the big news in the medical community was that two drugs that have been very effective against HIV pneumonia and have been thrown as a Hail Mary—even though this virus is not technically at all like HIV—in China turned out not to be effective. People have been using these things because we don’t have anything. We don’t even know how to properly care for these patients because we have never had to do this before.

Heilbrunn: So hospitals, essentially, are improvising?

Patel: Yes, in some regards. I am currently seeing posts about how you can hack a mask out of Home Depot supplies and people have been doing this. Hospital administrations only have a certain number of masks and they are being told that they cannot get more. So they are trying to do what they can; they are following the Center for Disease Control guidance, but they are also just trying to use their brains. The reason that we are now seeing hospitals rationing protective equipment is because of the stories out of Italy. In Italy, decisions are being made at the doctor level about who gets a stent and who doesn’t, who gets a ventilator and who doesn’t.

Let me be blunt: Nobody should put a doctor in that position. If a doctor believes both patients need ventilation, it is not appropriate or ethical to just have it be up to this individual to make that decision—but that is what’s happening in Italy. I’m not sure how public that story has become, or how public it will be in the coming weeks and months, but doctors in Italy have said to doctors in the United States, “do not let yourself get into that situation.” Hospitals have heard them, and that’s why you are seeing these hack-arounds. You are seeing very qualified, academic doctors on YouTube, such as a friend of mine who did a 15-minute video on how to split a ventilator—to use one ventilator for two patients. This is really just unprecedented, but that’s how hospitals are preparing. They are trying to prepare for something that there is no manual, no preparation for.

Heilbrunn: What about the ventilators? How did we end up in a position where we don’t have enough?

Patel: I don’t think this piece gets written about enough. It’s not just having the physical machines, although that is obviously the story coming out of Italy. We can figure out how to make ventilator machines. If you have seen any medical TV shows, whether it is Grey’s Anatomy or ER, you can manually rescue a patient, as these shows do when there are dramatic power outages. You can actually ventilate a patient by hand; it’s exhausting, but you can do it for days. You just need to have shifts of people. The problem is that you need humans. Whether you have a fancy ventilator that is top-of-the-line or you are hand-bagging a patient by a facemask attachment tube, you need several humans to do it and run checks to make sure everything is working correctly. That is the rate-limiting step in my mind. It’s not the actual machines. We can get the physical machines, we can even get, let’s call it a “federated” supply of machine from the Army.

What we can’t do is just instantly create an army of respiratory therapists who understand how to suction patients for so many hours. We can’t create an army of nurses. I have not had training in ventilator management in fifteen years. The truth is that I should probably learn how to manage a ventilator. We have so many ICU doctors who can’t manage a ventilator if there are thousands of patients on ventilators. So that’s the kind of gap we need to fill. The question is: how can we best fill those gaps quickly and do it without compromising the health of the patient. Because if you train me and then I need to run ventilation for a patient, there is just no way that it is going to be as good as from someone who has done this for their entire career.

Heilbrunn: Are we on the path to becoming Italy or worse?

Patel: Here’s what I can tell you about Italy. I think that their medical system, as a baseline, has a very heterogeneous infrastructure in the sense that Northern Italy is very different from Southern Italy. The infrastructure is incredibly dependent on the regional presence of universities that have more funding.

I do not think we are going to become like Italy. First, we are a larger country. In the Midwest regions, we have excellent care. Another difference between America and Italy is that we actually have about ten healthcare systems that cover the majority of care in the United States. They are incredibly well resourced, nimble, staffed well. That’s where I think we have an incredible advantage over Italy.

Where we will look a lot more like Italy is in certain parts of our country, where we have a higher density of people–not quite urban, we’re not talking New York, San Francisco, Chicago, but let’s go back to Fort Worth as an example—where you have a higher density of people but not as much of a geographic footprint of a larger healthcare system. In those places, you might see a little bit of breakdown, because you don’t have as much of a nationalized presence informing the local care.

Patel: I am. Mostly because I talk to the doctors whom are doing this actual work and they are smart. They are talking to their colleagues and doing all the work they need to do to be prepared.

Kavita Patel is a primary care physician in Washington DC and a nonresident fellow at the Brookings Institution. She was previously a Director of Policy at for the White House under President Obama and a senior advisor to the late Senator Edward Kennedy. She has published numerous papers and book chapters on healthcare reform and health policy. She regularly testifies before Congress and appears on NPR, CBS, NBC and MSNBC. She also serves on the board of several hospitals.