Why Critics of Obamacare Haven't Lost...Yet 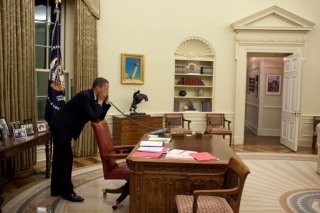 After last week’s terribly disappointing Supreme Court decision in King v. Burwell, Obamacare opponents have fewer options. They should reexamine their well-worn playbooks of the past. More of the same will produce less and less.

Some of us took our best shots through legal challenges in the courts. We were disappointed in the NFIB v. Sebelius individual mandate case three years ago. The King case, and similar ones in the lower courts, could have provided an opportunity for Congress to make important changes in health policy this year by putting the issue of tax credits in exchanges established by the federal government and the mandates they trigger up for new votes that mattered.

Those courtroom doors to reopening a real debate over the present and future for Obamacare are now closed. No matter how justifiable the fierce criticisms of Chief Justice Roberts’ contorted majority opinion may be, no fundamental, existential threats to Obamacare’s staying in business remain on the legal horizon.

We can expect more bluster and overheated rhetoric by Republican officeholders about last Thursday’s great injustice, as well as the chronic flaws of the Affordable Care Act. Symbolic pledges to seek a full repeal vote of the health law in Congress remain essentially empty threats. Acting on tangible legislative measures to remove the most dangerous and noxious parts of Obamacare and replace them with credible alternative policy approaches remains a much more elusive task. For most GOP officeholders and candidates, those actions always tend to remain somewhere over the rainbow—i.e. after the “next” election. But campaigning and promising, along with finger pointing and blame shifting, has not yet converted into acting and accomplishing tangible changes in the direction of national health policy.

Elections matter, but only when they are tied to serious and workable strategies that are committed to achieving change, rather than just talking about it. We have seen very little of the former thus far, and much more of the latter.

Meanwhile, the deeply flawed Obamacare-implementation machine wobbles and staggers ahead, hoping to become more embedded and institutionalized throughout further reaches of the U.S. health-care system.

The lesson is not to choose between handwringing and empty gestures. There is real work to be done, and it needs a more persistent, longer-term perspective.

It should begin with downscaling expectations for a rapid turnaround. Let’s also acknowledge the political and institutional facts on the ground. Substantial taxpayer subsidies for health-insurance coverage are not going away. The more important policy and political issues are who gets them, the relative amounts and manner in which they are distributed and the strings that are attached to using them.

Conventional Washington politics and lobbying will soon return to emphasis on incremental regulatory and legislative relief under the ACA regime for various health-sector interests. Some tweaks and adjustments to the edges of Obamacare are inevitable. They include the law’s exchange mechanisms, Medicaid expansion, counterproductive taxes, and ever-mutating spawn of regulations and interim guidance. Such long-overdue relief, on the margins, may be helpful, but it won’t fix deeper problems at the core of Obamacare. As  government contractors, a more consolidated health-care industry will hope to limit the broader political ambitions of its primary business partners in Washington. How domesticated and dependent this industry becomes in return remains an open question.

The key targets for slowing, then halting, and ultimately reversing our drift into the advance of Obamacare remain the individual mandate and, secondarily, the employer mandate. Those two mechanisms, though exaggerated in their strength, provide the locking devices to tie taxpayer subsidies to the ACA’s benefits requirements and pricing restrictions. Separating subsidies (however revised in future iterations) from further federal regulation of health care, is the route to the high ground of more market-based, consumer-centered health policy. If someone can no longer be penalized for choosing not to purchase government-approved insurance, and if an employer cannot be penalized for failing to offer such coverage, the Obamacare pretense of sweeping control of health-care arrangements will erode, regardless of the levels of subsidies it tries to dispense.

Getting to that stage, and beyond, to the beginning of truly market-oriented health care based on choice and competition, is going to happen much later, not sooner, than we hope. Before then, the inherent limitations and contradictions of Obamacare’s design and its resource constraints are already slowing its advancement. The politics of reforming entrenched public entitlement programs moves too gradually—see Medicare and Medicaid as examples of the outer bounds of time for such changes. But those programs do evolve and get somewhat better, if not fundamentally reconsidered and redesigned.

So, disappointed critics of Obamacare should become both more patient and persistent. Some change, and better health-care policy, is ahead. Old foreign-policy hands should recall a parallel set of strategy choices and plans at the beginning of the Cold War in the late 1940s. The bellicose rhetoric of “rollback of Communist control over Eastern Europe’s satellite nations” was no match for George Kennan’s long-term strategy of effective containment, before the inherent strengths and weaknesses of the East and West reached a better resolution. Let’s just hope for a somewhat speedier process closer to home.

Tom Miller is a resident fellow at the American Enterprise Institute.