Why the Death Edict on Salman Rushdie? 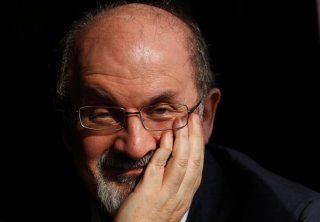 The stabbing of Salman Rushdie raises the question: Why did Ayatollah Ruhollah Khomeini sentence Salman Rushdie to death in 1989 for his novel The Satanic Verses? That the Iranian dictator had not read the book made this action, one that dispensed with laws, boundaries, and precedents, the more surprising.

Robin Wright explains in the New Yorker that this “was a political move to exploit the erupting fury in Pakistan, India, and beyond.” Giles Kepel argues that Khomeini’s edict “effectively proclaim[ed] himself the spiritual guide of all Muslims, thereby wresting the leadership role from the Saudis.” Sam Westrop, head of Islamist Watch at the Middle East Forum, concurs: “After Jamaat-e-Islami leaders in Britain flew to Saudi to petition for an international campaign in October 1988, Khomeini thought he needed to speak up or risk losing out.”

I disagree. This was not a tactical move by Khomeini to promote himself but a true and furious response. Why? Because an author named Salman Rushdie wrote a book called The Satanic Verses. Those two bare facts—and not the complex contents within the 546 pages in the novel—sufficed to provoke an emotional reaction.

Start with the title. The phrase “Satanic verses” refers to two deleted lines in the Koran that imply the Islamic prophet Muhammad, in a concession to his adversaries, briefly made Islam a polytheistic faith. In those two lines, he stated that three pagan goddesses named Lat, Uzza, and Manat can intercede between man and God: “These are the exalted birds/And their intercession is desired indeed.” A leading early Muslim historian of Islam, At-Tabari, wrote that “Satan threw” those words on Muhammad’s tongue.

Discussing this incident in his pathbreaking 1858 biography, The Life of Mahomet, the British orientalist William Muir, refers to “the two Satanic verses.” That appears to have been the first use of this phrase to refer to the deleted passage. Later Western authors then picked up the term, most notably W. Montgomery Watt, who devoted ten pages to the topic in his authoritative 1953 study, Muhammad at Mecca, as well as in his 1961 abridgement, Muhammad: Prophet and Statesman.

Basically, anyone over the past seventy years who—like Rushdie (and myself)—studied in the West about Muhammad and the Koran likely read Watt and encountered the “Satanic verses” phrase.

In contrast, the term “Satanic verses” is unknown in the mother tongues of Muslims, including Arabic, Persian, and Turkish. Scholars using those languages know the two deleted lines in the Koran as the gharaniq (birds) incident. Accordingly, Muslims like Khomeini who studied Muhammad’s life and the Koran but not in English have no idea what “Satanic verses” refers to.

What they do know is that translating “Satanic verses” into the languages spoken by Muslims raises unimaginably offensive implications. In Arabic, it becomes Al-Ayat ash-Shaytaniya; in Persian, Ayat-e Shetani; in Turkish, Şeytan Ayetleri. Shaytan is a cognate for “Satan” and poses no problems. But, unlike “verses,” which refers generally to poetry, song, and scripture, ayat specifically refers to “verses of the Koran.”

Therefore, back-translated literally into English—and this is the critical point—these Arabic, Persian, and Turkish titles mean “The Koran’s Satanic Verses.” Extrapolating slightly, this turns into “The Satanic Koran.” That explosively implies that Muhammad received the Koran not from God, nor that he made it up, but that he received it from the devil. For this reason, Ali A. Mazrui, a prominent Muslim academic, called the title “perhaps the most fundamental blasphemy” in the novel, a widely shared view.

“The Satanic Koran” also suggests Rushdie proclaimed the entire Koran—and not just two deleted verses—to come from the devil. For Mazrui, “Rushdie’s blasphemy does not lie in his saying that the Qur’an is the work of Muhammad. The blasphemy lies more in Rushdie’s suggestion that it is the work of the Devil.” Also: Abdelhamid Zbantout, a French Islamic leader, announced himself “indignant that someone could write that the prophet received the revelation from Satan, and not from the angel Gabriel.” Yaqub Zaki, a British convert to Islam, spelled out this misreading in the Times of London:

Rushdie’s use of the name of the devil responsible for the fraud is intended to indicate that the whole Koran is fraudulent and Muhammad a mean imposter; not a question of two verses spotted as such but all the 6,236 verses making up the entire book. In other words, the title is a double entendre.

But these assertions are all wrong. The title is not a double entendre. Nowhere in the novel does Rushdie state or imply that the Koran came from the devil; in fact, he portrays Muhammad as making it up. But angry Muslims reading the title as “The Satanic Koran” entirely missed these subtleties in the heat of their outrage. Later, no one bothered to verify these false assumptions, so they became received truths endlessly repeated.

Herein lies the most direct cause of the furor. Other books have to be read to uncover their blasphemies; this one announced the hideous outrage in large, gold relief letters right on the dust cover. (And the Persian miniature on the cover, showing “Rustam Killing the White Demon,” only confirmed an impression that the book centers on Satan.) Add to this what Muslims heard about the book’s irreverent contents—which eroticized Muhammad’s wives, called Muhammad by the extinct and hostile European name of Mahound, and portrayed God as a balding middle-aged man with dandruff—and the externalities alone damned Rushdie so thoroughly, of course, no one felt a need to read the actual book.

A novelist selects a title on the basis of, among other things, its originality, concision, drama, topicality, and memorability. Rushdie’s choice of The Satanic Verses meets all these criteria. What the author did not realize was that, combined with his rude treatment of Islamic pieties, his title had an incendiary effect. More than anything else, his apparently innocent choice of title explains why so many Muslims responded with fury to what would otherwise have been just another novel.

The title also helps explain the conspiracy theories that grew up around The Satanic Verses, for as word of the novel got out, and then became a front-page story, many Muslims knew in their hearts that such a diabolical plot could only come from the West. They devised a whole scheme and filled in the details: Western leaders, consulting with their orientalist experts, had come up with the despicable volume to spearhead a latter-day Crusader-style effort to sabotage Islam. Who else but the CIA or MI6 know enough to devise so crafty a scheme? The more that pious Muslims thought about it, the larger the issue grew, and the more impassioned their response. That the book was a work of fiction became increasingly irrelevant; what mattered was its challenge to the fundamentals of Islam, and the need to mount a defense. Such concerns were at the center of the Muslim response around the globe, including Ayatollah Khomeini’s.

Add to this that Khomeini knew one other fact: the author’s name, Salman Rushdie, the name of a born-Muslim. A non-Muslim ridiculing Islamic sanctities comes as no surprise, but a born-Muslim doing so is intolerable and renders him both an apostate and a traitor. Thus did Khomeini invoke a death sentence on Rushdie for “opposition to Islam, the Prophet, and the Koran.”

So, no, the death edict was neither about rivalries nor geopolitics. It was about saving Islam from a perceived blasphemy by a traitor working with the enemies of Islam.

Daniel Pipes, president of the Middle East Forum, is author of The Rushdie Affair (1990). Follow him on Twitter @DanielPipes