Why Democrats are Going Socialist 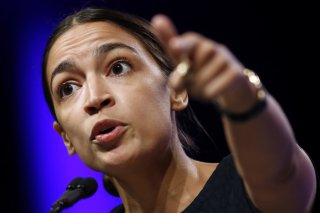 The lurch to the left seen in the Democratic Party these days—including a new and increasingly serious flirtation with democratic socialism—is largely a reaction to the same phenomenon that spawned the emergence of Donald Trump. I have identified that phenomenon in the past as a crisis of the old order, perhaps better understood as the disintegration of the status quo.

When the status quo crumbles, something has to replace it. For Republicans, we now know, that something is a new cluster of political impulses and initiatives that are reflected in Trump’s campaign and efforts at governance. They include a severe clamp on illegal immigration and legal immigration, along with new views on who should be admitted into the country as immigrants. Furthermore, Republicans now have a new aggressiveness toward actions by U.S. trading partners seen as unfair and economically hostile and a protective attitude toward federal entitlement programs. Another part of that platform includes an end to nation-building abroad and the mission of remaking other nations in the Western image. Finally, under Trump republicans also have undertaken a concerted effort to reduce barriers to economic vibrancy, including an assault on federal regulations and what are considered high tax rates.

Note that all of these positions, except the last one, go against what until 2016 was considered Republican orthodoxy. That crystallizes the reality that the old order is fading fast.

And the leftward lurch seen in many quarters of the Democratic Party is noteworthy also in that it represents an effort to counter the new Trumpian phenomenon, not with conventional Democratic thinking of the recent past, but with a jolt of advocacy that would have seemed outlandish a few years ago. That reflects an apparent perception among growing numbers of Democrats that they can’t fight Trump or his GOP acolytes with status quo arguments.

Hence do we see the Left in America doubling down on identity politics— a potent source of Republican anger—and countering GOP immigration initiatives with a call to abolish Immigrations and Customs Enforcement. Moreover, Democrats are embracing the concept of socialism, which at the least would mean very high tax rates on the productive classes, and ever greater regulatory regimes affecting ever more Americans. This also includes more redistributionist initiatives. Whether it would mean government ownership of what are now private enterprises isn’t entirely clear, but that can’t be ruled out as America grapples with the status quo crisis.

What precisely is this crisis of the old order? To understand the old order, think of Franklin Roosevelt, who transformed American politics by putting his Democratic Party at its center. After doing that, Roosevelt also transformed the world by putting his nation at its center. He didn’t anticipate, of course, Josef Stalin’s aggressive territorial ambitions and hence didn’t anticipate the Cold War, but he certainly put America in position to wage it, economically and militarily. And that defined the postwar status quo in global terms.

That’s gone now. America isn’t even close to the economic power it was at the end of World War II and even into the 1990s, relative to the rest of the world. In military terms, the United States faces a rising China, an increasingly hostile situation between Western Europe and Russia (largely the product of North Atlantic Treaty Organization expansion, in my view), and growing instability in key regions of the globe. We’re in a new world that demands new thinking. Hence the crisis.

In American domestic politics, FDR’s New Deal coalition is long gone. And Reaganism, which cut a significant dent in the Democratic political hegemony that existed pretty much up to his 1980 election, is also enervated. That leaves big questions about where we go politically—who will get the fealty of the American working class? What’s the role of organized labor? What’s the fate of public employee unions? What will be the impact of demographic trends, and will current trends continue? Will the Democrats resurrect their Electoral College “Blue Wall”? Will a Republican (almost certainly not Trump) at some point craft his electoral coalition into a governing coalition? Will the Democrats go socialist, and could that be a winning approach?

These are not questions that held much relevance to American politics until recently. Again, that’s because they weren’t pertinent to the old status quo. Now that the old status quo is gone, they are very relevant indeed.

For those who believe (and I am one) that presidential elections are mostly referendums on the incumbent or incumbent party, the nature and outlook of the oppositional candidate will be less important in the 2020 presidential election than the electorate’s assessment of Trump’s performance in office. If the judgment is adverse, which seems highly possible if not likely, then America will get a Democratic successor. That will be the case even if that successor turns out to be a leftist socialist.

Thus in certain circumstances, the Democrats can win with a socialist. Whether they can govern successfully with such a president is another matter.

Robert W. Merry, longtime Washington journalist and publishing executive, is the author most recently of President McKinley: Architect of the American Century.